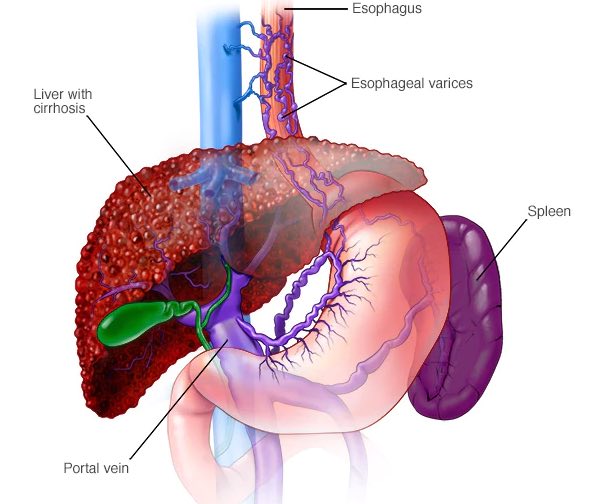 Esophageal varices are abnormal, enlarged veins in the tube that connects the throat and stomach (esophagus). This condition occurs most often in people with serious liver diseases.

Esophageal varices develop when normal blood flow to the liver is blocked by a clot or scar tissue in the liver. To go around the blockages, blood flows into smaller blood vessels that aren't designed to carry large volumes of blood. The vessels can leak blood or even rupture, causing life-threatening bleeding.

A number of drugs and medical procedures can help prevent and stop bleeding from esophageal varices.

Vomiting and seeing significant amounts of blood in your vomit
Black, tarry or bloody stools
Lightheadedness
Loss of consciousness (in severe case)
Your doctor might suspect varices if you have signs of liver disease, including:

Yellow coloration of your skin and eyes (jaundice)
Easy bleeding or bruising
Fluid buildup in your abdomen (ascites)
When to see a doctor
Make an appointment with your doctor if you have signs or symptoms that worry you. If you've been diagnosed with liver disease, ask your doctor about your risk of esophageal varices and how you can reduce your risk of these complications. Ask your doctor about an endoscopy procedure to check for esophageal varices.

If you've been diagnosed with esophageal varices, your doctor is likely to instruct you to watch for signs of bleeding. Bleeding esophageal varices are an emergency. Call 911 or your local emergency services right away if you have bloody vomit or bloody stools.

Esophageal varices sometimes form when blood flow to your liver is blocked, most often by scar tissue in the liver caused by liver disease. The blood flow begins to back up, increasing pressure within the large vein (portal vein) that carries blood to your liver.

This pressure (portal hypertension) forces the blood to seek other pathways through smaller veins, such as those in the lowest part of the esophagus. These thin-walled veins balloon with the added blood. Sometimes the veins can rupture and bleed.

Causes of esophageal varices include:

A parasitic infection. Schistosomiasis is a parasitic infection found in parts of Africa, South America, the Caribbean, the Middle East and Southeast Asia. The parasite can damage the liver, as well as the lungs, intestine and bladder

Although many people with advanced liver disease develop esophageal varices, most won't have bleeding. Varices are more likely to bleed if you have:

High portal vein pressure. The risk of bleeding increases with the amount of pressure in the portal vein (portal hypertension).

Large varices. The larger the varices, the more likely they are to bleed.

Red marks on the varices. When viewed through an endoscope passed down your throat, some varices show long, red streaks or red spots. These marks indicate a high risk of bleeding.

Severe cirrhosis or liver failure. Most often, the more severe your liver disease, the more likely varices are to bleed.

Continued alcohol use. Your risk of variceal bleeding is far greater if you continue to drink than if you stop, especially if your disease is alcohol related.

The most serious complication of esophageal varices is bleeding. Once you have had a bleeding episode, your risk of another bleeding episode greatly increases. If you lose enough blood, you can go into shock, which can lead to death.

If you've been diagnosed with liver disease, ask your doctor about strategies to avoid liver disease complications.

To keep your liver healthy:

Eat a healthy diet. Choose a plant-based diet that's full of fruits and vegetables. Select whole grains and lean sources of protein. Reduce the amount of fatty and fried foods you eat.

Maintain a healthy weight. An excess amount of body fat can damage your liver. Obesity is associated with a greater risk of complications of cirrhosis. Lose weight if you are obese or overweight.

Use chemicals sparingly and carefully. Follow the directions on household chemicals, such as cleaning supplies and insect sprays. If you work around chemicals, follow all safety precautions.

Your liver removes toxins from your body, so give it a break by limiting the amount of toxins it must process.

Endoscope exam. A procedure called upper gastrointestinal endoscopy is the preferred method of screening for varices. Your doctor inserts a thin, flexible, lighted tube (endoscope) through your mouth and into your esophagus, stomach and the beginning of your small intestine (duodenum).

The doctor will look for dilated veins, measure them, if found, and check for red streaks and red spots, which usually indicate a significant risk of bleeding. Treatment can be performed during the exam.

Imaging tests. Both abdominal CT scans and Doppler ultrasounds of the splenic and portal veins can suggest the presence of esophageal varices.

Capsule endoscopy. In this test, you swallow a vitamin-sized capsule containing a tiny camera, which takes pictures of the esophagus as it goes through your digestive tract. This might be an option for people who are unable or unwilling to have an endoscope exam. This technology is more expensive than regular endoscopy and not as available.

Treatments to lower blood pressure in the portal vein may reduce the risk of bleeding esophageal varices. Treatments may include:

Using elastic bands to tie off bleeding veins. If your esophageal varices appear to have a high risk of bleeding, your doctor might recommend a procedure called band ligation.

Using an endoscope, the doctor snares the varices and wraps them with an elastic band, which essentially "strangles" the veins so they can't bleed. Esophageal band ligation carries a small risk of complications, such as scarring of the esophagus.

Treatment if you're bleeding

Bleeding varices are life-threatening, and immediate treatment is essential. Treatments used to stop bleeding and reverse the effects of blood loss include:

Medications to slow blood flow into the portal vein. A drug called octreotide (Sandostatin) is often used with endoscopic therapy to slow the flow of blood from internal organs to the portal vein. The drug is usually continued for five days after a bleeding episode.

But TIPS can cause serious complications, including liver failure and mental confusion, which can develop when toxins that the liver normally would filter are passed through the shunt directly into the bloodstream. TIPS is mainly used when all other treatments have failed or as a temporary measure in people awaiting a liver transplant.

Restoring blood volume. You might be given a transfusion to replace lost blood and clotting factor to stop bleeding.

Preventing infection. There is an increased risk of infection with bleeding, so you'll likely be given an antibiotic to prevent infection.

Replacing the diseased liver with a healthy one. Liver transplant is an option for people with severe liver disease or those who experience recurrent bleeding of esophageal varices. Although liver transplantation is often successful, the number of people awaiting transplants far outnumbers the available organs.

Bleeding will recur in most people who have bleeding from esophageal varices. Beta blockers and esophageal band ligation are the recommended treatments to help prevent rebleeding.

Questions for your doctor

For esophageal varices, questions to ask your doctor include:

What's likely causing my symptoms?
What other possible causes are there?
What tests do I need?
What's the best course of action?
What are the side effects of the treatments?
Are my symptoms likely to recur, and what can I do to prevent that?
I have other health conditions. How can I best manage them together?
Are there restrictions that I need to follow?
Should I see a specialist?
Are there brochures or other printed materials I can have? What websites do you recommend?
Don't hesitate to ask other questions.

What to expect from your doctor
Your doctor is likely to ask you questions, such as:

When did your symptoms begin?
Have your symptoms stayed the same or gotten worse?
How severe are your symptoms?
Have you had signs of bleeding, such as blood in your stools or vomit?
Have you had hepatitis or yellowing of your eyes or skin (jaundice)?
Have you traveled recently? Where?
If you drink alcohol, when did you start and how much do you drink?
What you can do in the meantime
If you develop bloody vomit or stools while you're waiting for your appointment, call 911 or your local emergency number or go to an emergency room immediately. 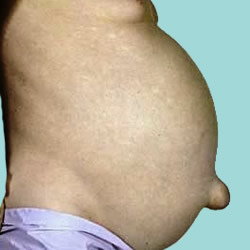 What is ascites? Ascites is the accumulation of fluid (usually serous fluid which is a pale yellow and clear fluid) that accumulates in the abdominal (peritoneal) cavity. The abdominal cavity is located below the chest cavity, separated from it by the diaphragm. Ascitic fluid can have many sources such as liver disease, cancers, congestive heart… 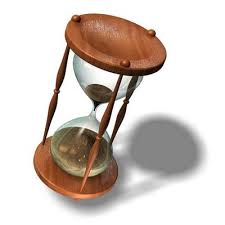 It’s been 11 years since I started my Wiki and shared articles on Liver Disease. In that time the website in its various forms has had millions of visitors and helped countless people. I’ve only ever asked for help once in those 11 years and that was to help pay the hosting. But that was… 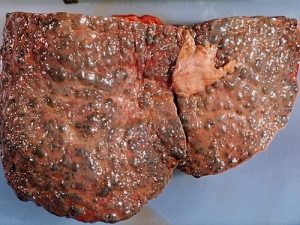 Cirrhosis of the Liver Stage 4

It’s been 11 years since I started my Wiki and shared articles on Liver Disease. In that time the website in its various forms has had millions of visitors and helped countless people. I’ve only ever asked for help once in those 11 years and that was to help pay the hosting. But that was… 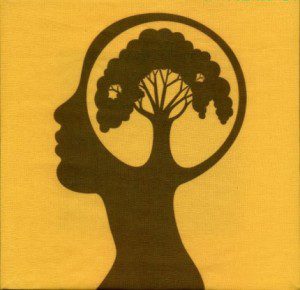 Alcoholic Cirrhosis as a Syndrome 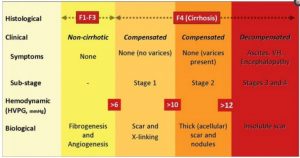 Scientists At The UA Make Critical End-Stage Liver Disease Discovery April 28, 2014 The discovery of an unknown cellular pathway has helped scientists and physicians better understand end-stage liver disease and offers a potential target for new therapeutics A team of researchers in the University of Arizona’s College of Pharmacy has discovered a molecular pathway… 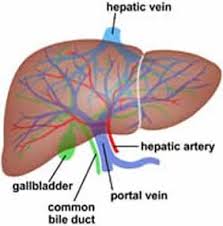 The Stages of Cirrhosis