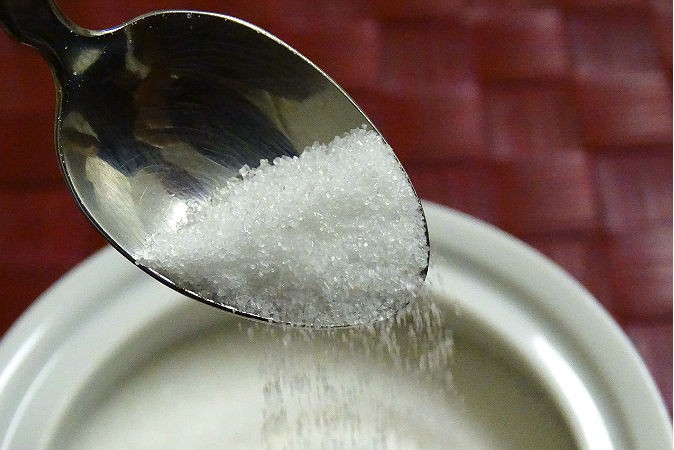 Trehalose is a natural sugar found in plants and insects and consists of two glucose molecules bound together. (pixabay CC0)

Nonalcoholic fatty liver disease, a condition closely linked to obesity, affects roughly 25 percent of people in the U.S. There is no drug treatment for the disease, although weight loss can reduce the buildup of fat in the liver.

Now, studying mice, new research shows that a natural sugar called trehalose prevents the sugar fructose — thought to be a major contributor to nonalcoholic fatty liver disease — from entering the liver and triggers a cellular housekeeping process that cleans up excess fat buildup inside liver cells.

The research, by a team at Washington University School of Medicine in St. Louis, appears Feb. 23 in the journal Science Signaling.

If you feed a mouse a diet high in fructose plus provide drinking water that contains three percent trehalose, you completely block the development of a fatty liver.

“In general, if you feed a mouse a high-sugar diet, it gets a fatty liver,” said first author Brian J. DeBosch, MD, PhD, a pediatric gastroenterologist. “We found that if you feed a mouse a diet high in fructose plus provide drinking water that contains three percent trehalose, you completely block the development of a fatty liver. Those mice also had lower body weights at the end of the study and lower levels of circulating cholesterol, fatty acids and triglycerides.”

Evidence suggests that nonalcoholic fatty liver disease develops as the liver works hard to process dietary sugar, especially fructose, found naturally in fruit but also added as high-fructose corn syrup to soft drinks and many processed foods. Ultimately, the body stores fructose in the liver as fats called triglycerides. In severe cases of the disease, the fat can build up to toxic levels that may eventually require a liver transplant.

The role of dietary sugar in nonalcoholic fatty liver disease has been implicated in conditions such as obesity, insulin resistance and high blood pressure, among other markers of metabolic syndrome. So it might seem counterintuitive to treat a condition that appears to be caused at least in part by sugar consumption, with more sugar. But the effect of trehalose on fructose transport into the liver gives some clues to how it works.

In previous research, DeBosch and his colleagues, including senior author Kelle H. Moley, MD, the James P. Crane Professor of Obstetrics and Gynecology, showed that a protein on the surface of liver cells called GLUT8 is required for mice to develop fatty livers in response to a high-fructose diet.

DeBosch and his colleagues showed that trehalose blocks the transport of energy in the form of sugar into liver cells. (Robert Boston)

“We knew that GLUT8 carries large amounts of fructose into liver cells,” DeBosch said. “So we looked for things that block GLUT8. We were interested in investigating trehalose because it has been studied in models of neurodegenerative disorders such as prion disease or amyotrophic lateral sclerosis — Lou Gehrig’s disease. In mice, trehalose appears to cause brain cells to swallow up abnormal proteins that accumulate in these conditions. We wondered if it would do the same for fat buildup in liver cells.”

DeBosch and his colleagues showed that trehalose blocks the transport of energy in the form of sugar into liver cells, causing the cells to behave as if they’re starving. When a cell is in a state of starvation, it can turn on a process called autophagy, or self-eating, and begin to consume the fat already stored in the cell. But the process is not specific to fat and can drain cells of proteins, sugars and other waste.

We appear to be hijacking the liver’s own starvation pathway using a sugar already found in nature.

“We appear to be hijacking the liver’s own starvation pathway using a sugar already found in nature,” DeBosch said. “We think autophagy may be triggered when the cell is stressed with too much fat or protein buildup. The cell turns on autophagy in response to the stress or because of a lack of energy and starts gobbling stuff up. It’s a house cleaning.”

DeBosch expects that other researchers may turn their attention to trehalose in order to understand exactly how this sugar hijacks cell signaling pathways. DeBosch also said the potential for this treatment strategy goes further than neurodegenerative and metabolic diseases.

“Autophagy plays numerous roles in the body, ranging from healthy development to involvement in cancer and autoimmunity,” DeBosch said. “The hope is that by studying this ‘nutraceutical’ and its actions, we can uncover and then leverage its important cellular activities to halt or reverse disease.”

Posted in Fatty Liver and Nash, In The News and tagged diet, FLD, nafld, sugar, Trehalose
← Jogging and Other Aerobic Exercises Could Protect Liver From Alcohol-Related Inflammation and InjuryStudy shows broccoli may offer protection against liver cancer →