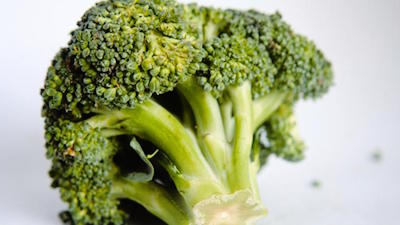 By Stephanie Henry, University of Illinois Today at 4:26 p.m.

URBANA, Ill. – Consumption of broccoli has increased in the United States over the last few decades as scientists have reported that eating the vegetable three to five times per week can lower the risk of many types of cancer including breast, prostate, and colon cancers.

A new study from the University of Illinois reports that including broccoli in the diet may also protect against liver cancer, as well as aid in countering the development of fatty liver or nonalcoholic fatty liver disease (NAFLD) which can cause malfunction of the liver and lead to hepatocellular carcinoma (HCC), a liver cancer with a high mortality rate.

Jeffery says that the majority of the U.S. population eats a diet high in saturated fats and added sugars. However, both of these are stored in the liver and can be converted to body fat. Consuming a high-fat, high-sugar diet and having excess body fat is linked with the development of NAFLD, which can lead to diseases such as cirrhosis and liver cancer.

“We called this a Westernized-style diet in the study because we wanted to model how so many of us are eating today,” Jeffery says.

Previous research suggests that broccoli, a brassica vegetable containing bioactive compounds, may impede the accumulation of fat in the liver and protect against NAFLD in mice. Therefore, Jeffery and her team wanted to find out the impact of feeding broccoli to mice with a known liver cancer-causing carcinogen. The researchers studied four groups of mice; some of which were on a control diet or the Westernized diet, and some were given or not given broccoli.

“We wanted to look at this liver carcinogen in mice that were either obese or not obese,” Jeffery explains. “We did not do it using a genetic strain of obese mice, but mice that became obese the way that people do, by eating a high-fat, high-sugar diet.”

Although the researchers were predominantly interested in broccoli’s impact on the formation and progression of cancerous tumors in the liver, Jeffery explained that they also wanted to observe the health of the liver and how the liver was metabolizing lipids because of the high-fat diet. “There is almost no information about broccoli and high-fat associated diseases,” she says.

“That was what we really set out to show,” Jeffery says. “But on top of that we were looking at the liver health. There are actually two ways of getting fatty liver; one, by eating a high-fat, high-sugar diet and the other by drinking too much alcohol. In this case, it is called non-alcoholic fatty liver, because we didn’t use the alcohol.  And it is something that is becoming prevalent among Americans. This disease means you are no longer controlling the amount of fat that is accumulating in your liver.”

With NAFLD, lipid globules form on the liver. During the study, the researchers observed these globules in the livers of the mice on the Westernized diet.

“We found that the Westernized diet did increase fatty liver, but we saw that the broccoli protected against it. Broccoli stopped too much uptake of fat into the liver by decreasing the uptake and increasing the output of lipid from the liver,” she says.

Jeffery notes that adding broccoli to the diet of the mice did not make them “thin,” or affect their body weight, but it did bring the liver under control, ultimately making them healthier. “This is one of the things that makes this very exciting for us,” she says.

“I think it’s very difficult, particularly given the choices in fast food restaurants, for everybody to eat a lower-fat diet. But more and more now you can get broccoli almost everywhere you go. Most restaurants will offer broccoli, and it’s really a good idea to have it with your meal,” Jeffery adds.

Jeffery’s previous research shows that eating broccoli freshly chopped or lightly steamed is the best way to get to the vegetables’ cancer-fighting compound, sulforaphane.

Although the researchers only used broccoli in the study, Jeffery adds that other brassica vegetables, such as cauliflower or Brussel sprouts, may have the same effect.

“Dietary broccoli lessens development of fatty liver and liver cancer in mice given diethylnitrosamine and fed a Western or control diet,” is published in the Journal of Nutrition. Co-authors include Yung-Ju Chen, previously of the U of I, and Matthew Wallig and Elizabeth Jeffery of the U of I.