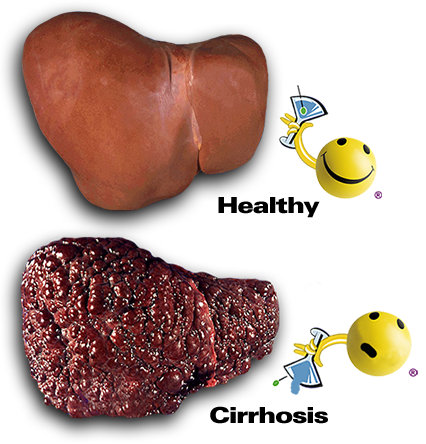 In order to begin to understand about cirrhosis and why the disease is quite so devastating we need to start with the liver. To many of us, myself included our first introduction to a liver was some rather nasty, chewy, grayish, brownish offal that was served up at school lunches. Onions and gravy made it somewhat digestible but it usually had really big veins running through it and any meat had to be surgically dissected from the veins.

Most of us, if asked what the liver actually did would probably only have a faint idea about it. Most of think it is just a big filter. Well, yes it is, but it also has an awful lot more to do. The liver is the powerhouse of the body, it is the largest organ in the human body weighing in at about 3 pounds and is located under the diaphragm on the right side of the body.

The liver performs, day in and day out over 400 vital functions which are necessary to keep the body alive. It is a filter, a detoxifier, a regulator, a controller, a back-up storage unit and an energy converter. Pretty much everything we eat, drink, breathe, touch will have an impact in one way or another on the liver. It is an insane, chemically driven body life support system.

Unlike most other organs in the body, we only have one of them - there is no reserve. It is the only organ in the body which is fed life-giving blood from two different directions. Because it is on its own, it possesses the most amazing powers of self-regeneration in that damaged cells are removed and replaced continuously.

It is a chemical factory, manufacturing enzymes and proteins that are used to control other parts of the body. One of its most important proteins is one called albumin which is critical to the human body. Albumin, manufactured by the liver and released into the blood stream becomes like an army of mini-livers, doing a lot of the liver's cleansing and regulating functions remotely around the body. Albumin, as we will later learn is central to issues regarding cirrhosis.

Life without a liver is not possible and it is no coincidence that the health of the liver reflects the health of the body as a whole. So as humans, given this simply amazing piece of engineering to look after out bodies, we set out to throw as much abuse at it as we can! The over eating, the bad diet, the excesses of consumption, the drugs, the drink, the alcohol, the air or smoke we breathe, we subject our livers to an enormous workload just trying to keep us alive.

The liver does all this normally without complaining. But everything has its limits and continual abuse can take its toll and when the ability to damage outstrips the ability to recover the party comes to a very quick end!
There is no absolute 'amount' or measure of abuse that the liver can take in its stride, they are all different as we are all different. Many factors can upset the livers natural survivability including genetic issues, disease issues, chemical exposure, poisons, viruses, cancer  etc.

With alcohol, for example, there is no safe limit. Alcohol is a poison. Some people can drink vast quantities and never suffer, some may consume a little and get very ill, some may consume none at all and die from liver issues.
Ultimately when the destruction of the liver gets too great it changes from being a wonderful smooth malleable organ into being a knotted, swollen or shrunk blockage through which blood can no longer flow freely. This knotting is called fibrosis and is the classic sign of a cirrhotic liver.

Cirrhosis doesn't just happen. it can take years of systematic abuse for the liver to degenerate to the point that it can no longer undertake the functions it was designed to do. Remember also that the power of the liver is such that it only needs maybe 20% of it to function and maintain life.

Little wonder then, given the huge involvement in every aspect of our bodies health that liver issues become very serious, very quickly. Cirrhosis, disease of the liver is often fatal.

Cirrhosis is not a starting point, cirrhosis is an end point. Over time, damage to the liver will accumulate, normally without any physical symptoms. Liver disease goes through 3 distinct phases before arriving at the 4th stage, cirrhosis. Unless a person is very lucky liver disease will remain undetected until it has become cirrhosis. Not for nothing is cirrhosis known as a 'Silent Killer'.

Even at the cirrhotic stage, the liver can regenerate and recover and as long as the cause of the damage is removed, the prognosis is good. However, if urgent action is not taken the final stage comes into play, this being End Stage Liver Disease (ESLD). End Stage is a politically correct way of saying Terminal.
So, from a physical point of view cirrhosis is scarring of the liver, but what does this mean in practical terms?

What is going to happen to me as a result of being diagnosed with cirrhosis?

Scarring impairs the liver’s ability to:

remove bacteria and toxins from the blood

There are many symptom associated with decompensated cirrhosis but the primary symptoms, I call them my trinity, are ascites or edema, hepatic encephalopathy and varices. All these conditions exist because of one thing. Portal Hypertension.

A simple explanation of what is occurring is to imagine a bad accident of an interstate. The scene of the accident becomes a blockage and assuming traffic can still pass by albeit very slowly, the result is a tail-back. The tail-back is the equivalent of Portal Hypertension. It is increased blood pressure on the lower input side of the liver. The tail-back leads to cars abandoning their route on the interstate and peeling off to try to fins ways around the blockage. This is what happens to the blood supply, there is a back-up of traffic causing pressure and there is an exodous onto smaller roads (veins) to try and find an alternate route. Where such route does not exist, the traffic becomes a trail-blazer and forges its own way creating new channels around the blockage as it does so.

Some of these newly formed, thin channels will emerge at the oesophagus and become what are called varices. To put it crudely varices are hemorrhoids in your throat and like hemorrhoids they can burst leading to massive bleeding. This can be fatal as the blood empties down into the stomach and vomiting ejects it. Not pretty!
Other channels will successfully circumvent the liver and rejoin the main blood supply which is a good result!

However, the blood that bypasses the liver has not been filtered, purified or cleaned and as a result still has all the toxins which the liver would have normally removed. As the blood continues on through the body, these toxins tend to accumulate in the brain leading to encephalopathy. Encephalopathy can lead to confusion, lack of coordination, coma and ultimately death.

The third result of the increased Portal Hypertension is ascites and edema. Blood vessels are by nature porous. The increased pressure in the veins cause fluid to leak from the veins and the fluid accumulates in the abdominal 'sump' in ascites or in the tissues of the lower legs, feet and testicles for edema. Ascites can bring about its own set of nasty conditions. The bloating can be extremely painful, excessive fluid can affect breathing, certainly affects appetite as the stomach is squashed, the fluid can become infected for no reason (spontaneous peritonitis) which can be fatal and hernias can occur due the increased pressure on the abdomen.

Unfortunately, these are only the major symptoms of cirrhosis, the others being in no particular order:
Loss of appetite,

Enlargement of the liver,

Some of the symptoms may be worse than others. Some may not manifest themselves at all but one thing is for sure that you are in for a roller-coaster ride and will never know from one day to another how you will feel. Symptoms will come and go. What may be awful one week will be gone the next, but replaced by something else possibly equally as awful. The only 'good' thing about these other symptoms is that by and large they are not life threatening.

OK, so now wehave explored a little bit of what cirrhosis is. In a nutshell it is scarring of the liver which interferes with the liver's ability to do its job and may lead to either ascites, varices, encephalopathy or any combination of them. In addition, it is going to lead to a whole host of other less serious but still unpleasant side-effects.

Cirrhosis is a truly awful disease.

Posted in The Beginning and tagged My Story
← D. Learning to Live With CirrhosisB. The Early Days →