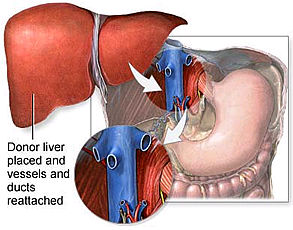 Nonalcoholic steatohepatitis (NASH) occurs when fat builds up in the liver. This accumulation of fat damages the liver and leads to cirrhosis. NASH is rapidly increasing in the U.S. mainly related to the epidemics of obesity and diabetes. As a result, the proportion of liver transplantations performed for NASH cirrhosis rose dramatically from roughly 1% in 1997-2003 to more than 7% in 2010. However, according to new research published in Liver Transplantation<%20http:/onlinelibrary.wiley.com/journal/10.1002/(ISSN)1527-6473>, a peer-reviewed journal of the American Association for the Study of Liver Diseases, post-transplantation survival for NASH patients is excellent, with one-year survival rates near 88%.

Excessive fat in liver cells in the absence of alcohol is known as non-alcoholic fatty liver disease (NAFLD) and is the most common liver disease in the U.S., affecting nearly 30% of the general population experts say. Previous research found that 15% to 20% of those with NAFLD have NASH—the most severe form of fatty liver causing inflammation and fibrosis. Primary risk factors for both NAFLD and NASH are central obesity, insulin resistance, and diabetes, all of which are increasingly prevalent and could impact the future demand for liver transplantation. In fact, prior studies suggest that by 2025 more than 25 million Americans may have NASH, which may progress to cirrhosis, liver cancer, and liver failure in 20% of these cases. This influx of new cases has the potential to dramatically worsen the shortage of organs available for transplantation.

In the current study, Dr. Anita Afzali and colleagues from the University of Washington in Seattle investigate the proportion of liver transplantations of NASH-related cirrhosis in the U.S. and estimate survival rates of those patients following transplantation. “With the epidemics of obesity and diabetes giving rise to cases of NAFLD and NASH, it is important to understand the impact of these metabolic conditions on the outcomes after liver transplantation,” says Dr. Afzali.

The research found that only 279 transplantations for NASH-cirrhosis (1.2%) were performed between 1997 and 2003, but increased dramatically to 1,531 (7.4%) between 2004 and 2010. The team found that by the end of the study period NASH was the fourth most common indication for transplantation behind HCC (34%), HCV (22%), and alcohol-related liver disease (11%). Survival was excellent among patients with NASH with 88% surviving at one year, 82% at three years, and 77% at five years following liver transplantation.

Patients with NASH had higher survival rates than patients with HCC, HCV, alcoholic liver disease, acute hepatic necrosis, hemochromatosis and cryptogenic liver disease, but were lower than those with PBC, PSC, autoimmune hepatitis and HBV. Post-transplantation survival was similar in NASH patients compared to non-NASH patients, despite being older, more obese, and more likely to have diabetes. Their analysis shows deaths caused by recurrent disease occurred in roughly 9% of NASH patients compared to 17% of patients without NASH. The authors believe this is likely due to a greater frequency of recurrence of diseases such as HCV in those without NASH.

“Our study confirms post-transplantation survival in recipients transplanted for NASH is excellent and comparable to patients with other liver diseases,” concludes Dr. Afzali. “With the shortage of available donor organs, appropriate allocation of livers is an important concern for transplant centers and our findings indicate NASH-cirrhosis patients are potentially good candidates for liver transplantation. However, careful screening for cardiovascular disease prior to transplantation and monitoring of underlying cardiac and metabolic conditions following transplantation is recommended to ensure optimal survival for patients with NASH.”