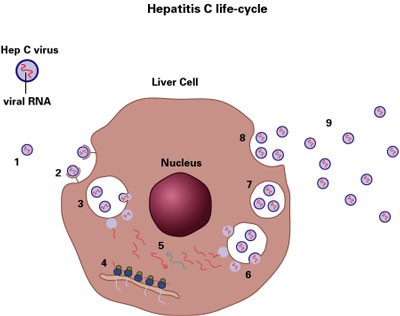 Although it occurs in less than 10% of transplant recipients with chronic HCV, a severe and rapidly progressive form of recurrent HCV infection characterized by cholestatic disease has a major impact on survival.

In contrast to a chronic hepatitis observed in most patients with recurrent HCV, this syndrome is defined by a total serum bilirubin of more than 6 mg/dL, elevated alkaline phosphatase or gamma glutamyltransferase levels more than 5 times the upper limit of normal, high serum HCV RNA levels, and histologic features including central hepatocyte ballooning without necrosis, cholangiolar proliferation without loss of bile ducts, and intrahepatic cholestasis in the absence of significant inflammation, biliary obstructive disease, or vascular complications.

Several recipient, donor, and viral factors, as well as the use of specific immunosuppressive agents, have been identified as risk factors for increased severity of disease progression, allograft loss, and decreased survival in patients with HCV who undergo liver transplantation.

The presence of a severe histologic grade of inflammation early in the post-transplant course, particularly within the first year, may be predictive of more rapid fibrosis pro­gression and cirrhosis at 5 years. Elevated serum HCV RNA levels both prior to undergoing transplant and during the post-transplant period may also be associated with progressive disease.

However, data that strongly support these factors, specifically in association with HCV disease progression, are limited or, in some cases, conflicting.

• Use of high-dose intravenous pulse corticosteroids or muromonab-CD3

Cytomegalovirus (CMV) infection is common in liver transplant recipients and is a major risk factor for severe recurrence of HCV-associated liver disease.

The greatest risk of CMV disease occurs in the setting of donor CMV seropositivity and recipient sero-negativity. Prophylaxis or preemptive therapy have been described as a means of preventing CMV infection in at-risk individuals.

Prophylaxis with valganciclovir for 3 months following liver transplantation has been reported as the most common strategy utilized in this population. Immunosuppression may have a significant impact on the risk of disease progression following transplant.

Viral kinetics studies have described a rapid increase in serum HCV RNA levels in patients who receive high- dose intravenous corticosteroids intraoperatively or in the treatment of acute cellular rejection. Further studies have identified the use of pulse intravenous corticosteroid therapy or muromonab-CD3 (Orthoclone OKT3, Ortho Biotech; an anti-CD3 monoclonal antibody) as independent risk factors for development of cirrhosis and graft failure.

Results of prospective studies evaluating outcomes in HIV-HCV co-infected individuals have revealed significantly reduced post- transplant survival in co-infected patients compared to other HIV-positive or non-HIV transplant recipients, with 3- and 5-year survival rates as low as 56% and 33%, respectively. In particular, HIV-HCV co-infected patients with CD4+ cell counts less than 200 cells/pL are at an increased risk, indicating the negative impact of an immunocompromised state in the setting of immunosuppressive therapy following transplantation.

The most accurate means of testing for the presence of HCV-associated disease resulting from recurrent HCV infection is a liver biopsy. Although elevations in serum aminotransferase and HCV RNA levels may occur in the setting of HCV recurrence, histopathologic assessment by an experienced pathologist provides the most definitive diagnostic information and is critical to distinguishing between recurrent HCV and other disease processes, including acute or chronic rejection, biliary disease, or other viral infections such as CMV.

Annual liver biopsies are recommended in HCV liver transplant recipients in order to assess for progressive allograft fibrosis and potential candidacy for antiviral therapy, as combination peginterferon alfa (PegIFN) and ribavirin (RBV) should be considered in patients with histologic evidence of recurrent HCV and stage 2 fibrosis.