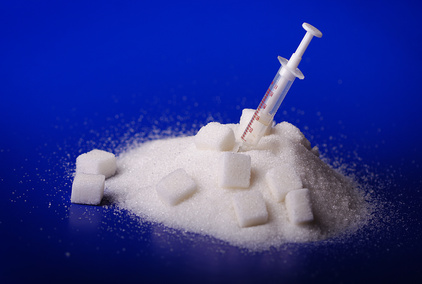 Having an incurable disease like Hepatitis C can leave many feeling helpless over the course of their illness. However, there are many everyday choices that can either fan the flames or reduce the impact of this virus. Sugar consumption is a prime example of how food selection can affect the progression of Hepatitis C.

As one of the most common causes of chronic liver disease, Hepatitis C affects approximately four million Americans. Until modern medicine determines how to eliminate this contagious disease, infected individuals must focus their attention on minimizing the damage Hepatitis C causes in their liver. Unfortunate for those of us with a sweet tooth, sugar consumption has the capacity to worsen liver inflammation. Thus, sugar can encourage Hepatitis C’s progression to more advanced stages of chronic liver disease.

One way to hinder the progression of Hepatitis C is by preventing the first step toward permanent liver damage – inflammation. In general, the stages of liver disease involve inflammation, fibrosis and cirrhosis:

3. When fibrotic liver tissue continues to build, the scarring can no longer heal. At the point when the liver damage is irreversible, cirrhosis is diagnosed. Characterized by hardened and shrunken liver tissue, cirrhosis can lead to fatal complications, such as liver failure or liver cancer.

A newly understood phenomenon, inflammation underlies many modern health problems, from heart disease to obesity to diabetes to liver fibrosis. According to Dave Grotto, RD, a spokesperson for the American Dietetic Association, “Sugar can play a role in inflammatory diseases. Poor regulation of glucose and insulin is a breeding ground for inflammation.”

Whether from the Hepatitis C virus or some other cause of liver disease, liver inflammation is due to an immune response that helps this organ rebound from injury. However, researchers agree that there is a limit to inflammation’s usefulness. Factors that create excessive amounts of inflammation, like sugar consumption, perpetuate a destructive continuation of inflammation.

During the past 25 years, the average person’s intake of sugar and other natural sweeteners has increased dramatically, from approximately 123 to 160 pounds a year. Many assume that an emphasis on low-fat diets has precipitated a rise of nearly two percent per year in Americans’ sugar consumption. Because this health trend has led to the removal of oils from processed foods, sugar has replaced it to maintain the tastefulness of reduced-fat foods.

While sugar has never been considered a mainstay of a healthy diet, biologists now recognize a link between sugar and inflammation. Below are two reasons that high levels of sugar in the bloodstream contribute to inflammation:

1. Glycosylation – When blood sugar goes up rapidly, sugar can attach itself to collagen in a process called glycosylation. When collagen becomes glycosylated, it loses its flexibility and becomes inflamed.

Some foods are obviously high in sugar, like candy, pastries, cookies and sodas. However, certain carbohydrates are another culprit of high blood sugar. Because they break down into glucose (sugar) molecules quickly, refined carbohydrates cause a quick jump in blood glucose levels. Thus, refined carbohydrates like white breads, white pasta and potato chips, can have similar deleterious effects as a sugary desert.

Americans typically consume loads of sugar each day without a thought as to how it affects their health. By simply reducing the amount of sugar and refined carbohydrates in the diet, the liver is protected from unnecessary inflammation through glycosylation and excess IL-6 production. Since rapid rises in blood sugar encourages inflammation throughout the body – including the liver – those with chronic Hepatitis C can slow down their progression of liver disease by being cautious with their sugar intake.