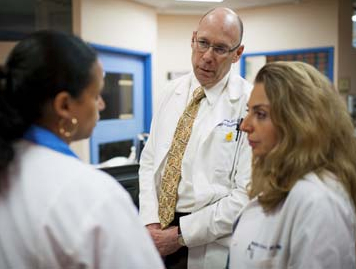 In the past two decades, the prevalence of the disease, known as nonalcoholic fatty liver, has more than doubled in teenagers and adolescents, and climbed at a similar rate in adults. Studies based on federal surveys and diagnostic testing have found that it occurs in about 10 percent of children and at least 20 percent of adults in the United States, eclipsing the rate of any other chronic liver condition.

There are no drugs approved to treat the disease, and it is quickly becoming a leading cause of liver transplants around the country.

Doctors say that the disease, which causes the liver to swell with fat, is particularly striking because it is nearly identical to the liver damage that is seen in heavy drinkers. But in this case the damage is done not by alcohol, but by poor diet and excess weight.

“The equivalent of this is foie gras,” said Dr. Joel E. Lavine, the chief of pediatric gastroenterology, hepatology and nutrition at NewYork-Presbyterian Morgan Stanley Children’s Hospital. “You have to force feed ducks to get fatty liver, but people seem to be able to develop it on their own.”

Gavin Owenby, a 13-year-old in Hiawassee, Georgia, learned he had the disease two years ago after developing crippling abdominal pain. “It’s like you’re being stabbed in your stomach with a knife,” he said.
An ultrasound revealed that Gavin’s liver was enlarged and filled with fat. “His doctor said it was one of the worst cases she had seen,” said Gavin’s mother, Michele Owenby. “We had no idea anything was going on other than his stomach pain.”

With no drugs to offer him, Gavin’s doctor warned that the only way to reverse his fatty liver was to exercise and change his diet. “They told me to stay away from sugar and eat more fruits and vegetables,” Gavin said. “But it’s hard.”

Most patients have a less severe form of the disease, with no obvious symptoms. But having nonalcoholic fatty liver is a strong risk factor for developing heart disease and Type 2 diabetes. And in 10 to 20 percent of patients, the fat that infiltrates the liver leads to inflammation and scarring that can slowly shut down the organ, setting the stage for cirrhosis, liver cancer and ultimately liver failure. Studies show that 2 to 3 percent of American adults, or at least 5 million people, have this more progressive form of the disease, known as nonalcoholic steatohepatitis, or NASH.

“This is the face of liver disease in the United States,” said Dr. Shahid M. Malik of the Center for Liver Diseases at the University of Pittsburgh Medical Center. “If you’re at any liver transplant center in the country, there’s no doubt that this is a big problem.”

Three decades ago, NASH was so rare that there was no medical name for it. Many doctors assumed that fat that accumulated in the liver was fairly harmless. But today, NASH is a growing strain on liver clinics and the fastest rising cause of liver transplants.

A study by the Mayo Clinic found that the percentage of all transplants performed nationwide because of NASH had reached 10 percent by 2009, up from 1 percent in 2001, even as the rates for hepatitis C, alcoholic liver disease and other conditions remained stable. NASH is projected to surpass hepatitis C as the leading cause of liver transplants by 2020, in part because of new drugs that can effectively cure hepatitis C, but also because of the rapid growth of fatty liver disease.

Fatty liver strikes people of all races and ethnicities. But it is particularly widespread among Hispanics because they frequently carry a variant of a gene, known as PNPLA3, that drives the liver to aggressively produce and store triglycerides, a type of fat. The variant is at least twice as common in Hispanic Americans compared with African-Americans and non-Hispanic whites.

In Los Angeles, liver disease is diagnosed in one out of two obese Hispanic children, and it is a leading cause of premature death in Hispanic adults.

At the University of California, Los Angeles, home to one of the largest liver transplant centers in the world, nearly 25 percent of all liver transplants are performed because of NASH, up from 3 percent in 2002. If the prevalence of NASH continues to increase at its current rate and effective treatments are not found, about 25 million Americans will have the disease by 2025, and 5 million will need new livers, said Dr. Ronald W. Busuttil, chief of the division of liver transplantation at the David Geffen School of Medicine at UCLA.

“I’m really afraid that the explosion of this condition is going to overrun the resources available to the transplant centers around the country,” Busuttil said. “In the United States right now, we do about six to seven thousand liver transplants a year. Can you imagine if we have millions of people on the list? It’s unfathomable.”

With NASH rates rising rapidly, drug companies are racing to produce the first drug to treat it.

In January, Intercept Pharmaceuticals, a small biotechnology firm, announced that its clinical trial of obeticholic acid showed promise in treating NASH, causing its stock price to soar. The National Institutes of Health, which sponsored the trial, are expected to present results from it later this year.

Another company, Galectin Therapeutics, was granted a special fast-track designation by the Food and Drug Administration to speed its development of GR-MD-02, a drug that may help reverse some of the more advanced symptoms of the disease.

But it will be several years before any drugs for NASH reach the market, said Dr. Kathleen Corey, the director of the Massachusetts General Hospital Fatty Liver Clinic, which was founded four years ago.
“We see patients with undiagnosed cirrhosis in their teens and 20s,” she said. “That’s something we never would have thought was possible in the past.”

Yubelkis Matias, 19, an honors student at Bronx Community College, was told she has NASH several years ago. She is reminded of the trouble brewing in her liver by the sharp abdominal pains that come and go. Like Gavin, she has been told by her doctors that diet and exercise may be her only shot at reversing the disease. But at 5-foot-5 and 200 pounds, she finds every day a struggle.

“I’m on a roller coaster,” she said. “I eat healthy, then not healthy – pizza, McDonald’s, the usual. My doctor told me I have to quit all of that. But it’s cheap, and it’s always there.”

Like many hepatologists, Corey helps her patients manage their high cholesterol, blood sugar and other metabolic problems that coincide with fatty liver. She counsels them to avoid sugar and alcohol, and she offers them high dosages of vitamin E, an antioxidant that studies show can relieve some symptoms of the disease. And she urges them to lose weight, the only proven way to reduce fat in the liver.

In adults, the rising prevalence of fatty liver has mirrored the increase in obesity. But in children, fatty liver is increasing at a rate “faster and above” the increase in childhood obesity, said Dr. Miriam Vos, the lead author of a study in The Journal of Pediatrics last year that estimated that one in 10 adolescents have the disease.

“That suggests that there’s something else going on,” said Vos, a pediatric hepatologist at Children’s Healthcare of Atlanta. “We don’t know, but some of the research has shown there may be early exposures in pregnancy or diet exposures that could be helping to drive this.”

In studies, Vos and other researchers have found that when children with fatty liver consume sugar, they produce far more triglycerides than children without the disease, and this may be exacerbating fat accumulation in the liver. Cutting out sugary drinks often leads to “a big improvement” in her patients, Vos said. “But I don’t know if that improvement is specifically because of the sugar or because they cut back on a lot of calories” and have lost weight.

Some researchers believe that insulin resistance, a hallmark of Type 2 diabetes, may be an underlying cause of fatty liver. But not everyone who has the disease is insulin resistant. Nor is every fatty liver patient overweight. People of Asian descent, for example, develop the disease at a lower body mass index than others, said Dr. Rohit Loomba, a fatty liver specialist at the University of California, San Diego, School of Medicine.

Doctors are also trying to figure out why some people with fatty liver progress to NASH and cirrhosis, while others do not. Loomba said that continual weight gain seems to be one driving force behind the progression.

As a result, doctors who treat fatty liver stress the urgency of diet and exercise to their patients. But many find it too hard, especially those who are obese and in the late stages of the disease, said Malik at the University of Pittsburgh.

“A lot of times when I see a patient with fatty liver,” he said, “the first thing out of their mouth is, ‘Well, is there a pill for this?’ And there’s not. There just isn’t. You have to make lifestyle changes, and that’s a much more difficult pill for people to swallow.”