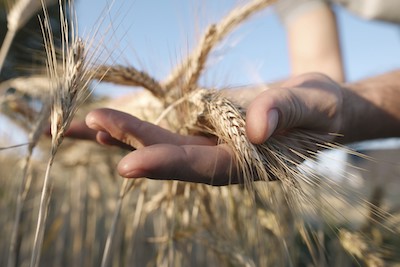 The Problem Isn’t Wheat. It’s What We’ve Done to It

The industrial food system is breaking our bodies — and our land

By Bob Quinn and Liz Carlisle

When I looked out over my family’s farm, I realized that the primary crop we grew — wheat — was trying to tell us something. As an increasing number of my friends and neighbors came down with symptoms of “gluten sensitivity,” I read everything I could get my hands on to try to understand what might be wrong with our wheat. At first, there wasn’t much to read: Early on, these wheat-sensitive people were waved off as hypochondriacs.

But in the past 10 years, there has been a flood of diet books, cookbooks, and gluten-free manifestos, all offering explanations and solutions for individuals who have trouble digesting wheat products. These books have offered relief for millions of suffering people and validated their experience with at least some degree of sound science about the interaction between the wheat they are eating and their digestive systems. I think these gluten-free guidebooks are right to condemn most of the wheat in the contemporary American diet as lacking in nutrition and ill-suited to our bodies’ needs. And yet, none of these books answered the burning question nagging at me:

If we’ve been eating wheat for 10,000 years, why has it suddenly started giving us trouble?

In the fall of 1986, I launched my first experiment with organic. I prepared two 20-acre fields for winter wheat planting, side by side. The first field would be chemical-free. I had been growing alfalfa hay there for the past few years, so I hadn’t been spraying it with herbicide. And since alfalfa is a legume, I had plowed it into the soil in place of synthetic fertilizer. I took a soil test to measure how much nitrogen I got from the alfalfa and found that it was pretty high: 95 pounds per acre.

The second field was my control. To be sure it was an apples-to-apples comparison, we took soil tests to see how much nitrogen was present. Since we hadn’t planted legumes there for some time, we weren’t surprised to find that the nitrogen content was significantly lower than in the field that had been planted with alfalfa. But we didn’t want to give the organic experiment an unfair advantage, so we added enough synthetic nitrogen fertilizer to the control plot to make sure both fields had an equivalent start at 95 pounds per acre.

The only difference between the two fields was the row spacing of the seeds. In the control field, I planted the rows of wheat seeds 14 inches apart, as we normally did. But in the organic field, I planted them closer together, just 7 inches apart. I had been told that getting quick canopy cover — smothering out any unwanted plants with a consistent stand of crops that captured all the sunlight — was important for preventing weed problems in organic systems. So, in essence, I used the narrower row spacing to substitute for the herbicide that we used in the control field.

As the ground began to freeze in the late fall, the wheat seedlings in both fields “hardened off,” pausing their growth to wait out the cold Montana winter. I could hardly wait for the snow to melt so I could see how the two fields would develop the following spring.

The next year, we had some unusual late spring rain, which stimulated the growth of something we didn’t want: kochia, otherwise known as fireweed. To make matters worse, the weed outbreak came after we’d already sprayed all our conventional fields with herbicide, as we typically did in late May. Since we were able to spray only one time, there was nothing we could do but watch the fireweed grow and worry about it. By the time August rolled around, there were so many kochia plants in the control field that they interfered with the harvest, and we had to be careful that they didn’t plug up the combine or put too much moisture into the wheat and cause it to mold in storage. Slowly, carefully, I harvested the two fields and gathered my data.

The yields from the organic and conventional fields were nearly identical. So was the protein content. And the chemical field was weedier than the organic one! The narrow row spacing in our experimental plot had shaded out the kochia plants, and they never got started. My father was astounded. He’d spent hundreds of thousands of dollars on fertilizer and herbicide — only to find out that he could have accomplished the same thing by strategically growing alfalfa at the right time in his crop rotation and planting his wheat seeds closer together.

Starting with those 20 acres in 1986, I transitioned our farm to organic rapidly. The spring of 1988, just my second growing season “experimenting” with organic, turned out to be the last time I ever used chemicals on a single acre of the farm.

The summer of 1988 brought a disastrous drought. Our wheat plants were short and shriveled, and many failed to develop so much as a single kernel of grain. We didn’t even bother to harvest some of our conventional fields — the yield on my 20-acre control plot from the previous season, for example, was zero. My organic field was nothing to brag about — four bushels per acre. But it was enough to pay for the cost of harvesting, with a little profit on top. From the perspective of gross yields, you might say it was a small but significant difference.

But if you looked at 1988 from the perspective of net profit, the difference between the organic field and the chemical field was night and day. My only expense for the organic field was the seed, and I got enough crop to get my seed back. But I’d put a lot of money into the fertilizer and sprays for the chemical field and I still got zero. It was a huge loss. The thing was, I didn’t actually have to pay my chemical bill. The federal government essentially covered it for me.

When I started my transition to organic, I began paying more attention to our crop subsidies, because they were getting smaller. In those days, subsidy payments were calculated on “base acres” — the number of acres a farmer had enrolled and committed to use for a particular crop. You couldn’t get base acres for just any crop, only the ones the federal government had included in its commodity program. Midwesterners mostly had them for corn and soybeans, which they had sufficient rain and sunshine to grow. In the South, people had base acres in cotton. But in our area, the only options were wheat and barley. Organic farming required more diverse cropping rotations than just wheat and barley to properly feed the soil and break up pest cycles, so I was gradually taking our farm out of base acres to grow a wider variety of crops, thus forgoing some of our subsidies.

Curious to see what I was missing out on, I looked up the size of our subsidy payments from the mid-1980s, right before I started transitioning to organic. They ranged from about $24,000 to $26,000 per year. Then I looked up our annual chemical bills. They also ranged from about $24,000 to $26,000 per year. The government subsidy was paying our chemical bill! No wonder nobody bothered to think about how to reduce it. The whole sorry system was propped up at the taxpayer’s expense. Worst of all, American taxpayers weren’t even subsidizing family farmers, as they no doubt believed. They were subsidizing multinational chemical corporations. The federal dollars only passed through the farmer’s checkbook, which served as a conduit between the federal treasury and chemical companies’ coffers.

After 40 years of farming, I’ve come to see that it’s the logic of this industrial food system that’s at the center of our country’s epidemic of diet-related disease, including gluten sensitivity.

The problem isn’t wheat — it’s what we’ve done to it. By farming it with industrial chemicals, transforming its nutrient profile through industrial processing, and breeding it to meet the needs of these industrial systems rather than our own bodies, we’ve taken the staff of life and turned it into a liability rather than an asset. But as I’ve seen on my own farm and now many others around the world, this ancient edible grass can be regenerated. It can help us heal our bodies, as my research partners and I have seen with heritage varieties that reduce inflammation rather than cause it. It can help us heal our land, as I’ve seen with organic production of grains in rotation with legumes and soil-building cover crops. And it can help us heal our rural communities, where higher quality food and decent livelihoods go hand in hand.

Bob Quinn is an organic farmer from Big Sandy, Montana. Liz Carlisle is a Lecturer at Stanford University. Together, they are the authors of “Grain by Grain,” recently released by Island Press.