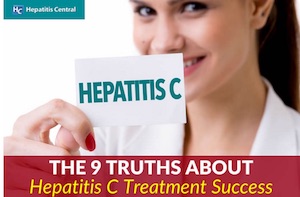 As the medications for Hepatitis C continue to improve, greater numbers of people are relishing in their successful treatment outcomes. Despite finally being free of the Hepatitis C virus, most physicians refrain from telling their patients they are cured. The reason for avoiding this terminology is uncertainty regarding the implications of successful Hepatitis C treatment.

Many Hepatitis C drug regimens now boast a 95 percent or higher success rate. Successful treatment is defined as achieving a sustained viral response (SVR). SVR is considered attained when Hepatitis C is not detectable in the blood for at least six months after the last treatment dose. The hesitancy about SVR being the same as a cure has to do with whether or not it is permanent. Some healthcare practitioners will use the word “cure” because SVR is as close as we can get to curing Hepatitis C. Meanwhile, others will use the word “remission” because of doubts as to the permanence of SVR. Neither is entirely accurate.

Compared to most other infectious diseases, the treatment and eradication of Hepatitis C is still in its relative infancy. The medical community is continuously learning and evolving, working hard to eliminate this viral infection of the liver.

The nine truths listed above are based on what we know to be true. There are still several unknowns, and until those unknowns are clarified, most physicians abstain from calling SVR a cure.

There is one thing for certain, achieving SVR is the closest we have to Hepatitis C eradication – and the likelihood of SVR being permanent is very, very high.

Posted in Hepatitis and tagged hepatitis, hepc, treatment
← Britain's most used pesticide is linked to NAFLDWhat causes liver pain after drinking? – and other things →