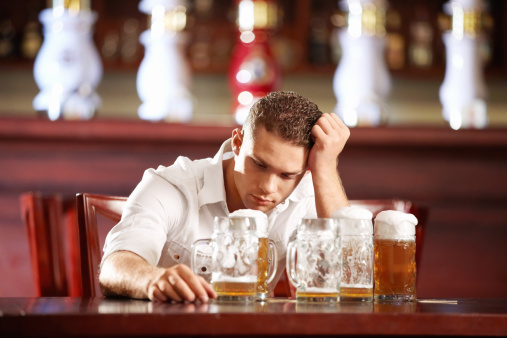 What causes liver pain after drinking?

If you are one of the many Americans who enjoy having a drink or two, experiencing liver pain after drinking may alarm you. Your liver is a vital organ responsible for breaking down the nutrients you consume and turning them into energy, as well as detoxifying your body, but when it becomes damaged, you often don’t realize it until the damage is severe.

What does alcohol do to the liver?

Your liver is responsible for processing the alcohol that enters your system, and is only able to handle a small amount at a time. When you drink, the alcohol is absorbed through the stomach and small intestine into the bloodstream. This blood is filtered through the liver first before travelling to the other parts of the body. Once in the liver, alcohol produces an enzyme called acetaldehyde that can damage liver cells and cause permanent scarring.

How long does it take to have liver damage from alcohol?

Liver damage develops in stages, beginning with steatosis. Steatosis is the term for having a fatty liver, a condition that occurs in nearly everyone who drinks heavily. It is the earliest stage of liver disease and occurs when fat accumulates in the liver cells. This damage is reversible once alcohol consumption has stopped. The second stage is called alcoholic hepatitis, and occurs if heavy drinking continues after the development of steatosis. Mild alcoholic hepatitis causes the liver to become inflamed, resulting in progressive liver damage that can last for years before turning into cirrhosis. Acute alcoholic hepatitis may cause liver failure and life-threatening complications to develop in a matter of days. Alcoholic hepatitis is also reversible with the cessation of drinking. The last stage is liver cirrhosis, in which healthy liver cells and tissue are replaced by scar tissue, inhibiting the liver’s ability to function correctly. Approximately 10 to 20 percent of heavy drinkers will develop liver cirrhosis after at least ten years, and this damage is irreversible.

What are the problems of drinking too much alcohol?

Drinking too much alcohol can lead to a variety of health issues such as serious liver problems and alcoholic liver disease, pancreatitis, depression and anxiety, impotence, high blood pressure, mouth, gullet, liver and breast cancer, obesity, addiction, nerve damage, and stomach disorders. Drinking heavily also increases your risk of accidents, as approximately one in every seven road deaths are related to alcohol.

As outlined above, the stages of alcoholic liver disease are steatosis or fatty liver, mild and acute alcoholic hepatitis, and cirrhosis. The symptoms of fatty liver include occasional pain in the upper-right abdomen. When damage progresses into acute alcoholic hepatitis, symptoms include nausea, vomiting, fever, abdominal pain, and jaundice. Cirrhosis causes scarring on the liver and prevents the organ from functioning properly. It can cause complications such as esophageal bleeding, kidney failure, and even liver cancer.

What to do for liver pain after drinking

If you are experiencing liver pain after drinking, you should contact your doctor so they may diagnose the cause of the pain. To do so, your doctor may conduct a liver biopsy, blood test, and a study of your liver function to assess how severe your liver damage may be. You may also be encouraged to attend alcohol counselling programs to help you abstain from drinking, as well as prescribed vitamin A and B supplements to help your liver heal. In the case of severe cirrhosis, you may need a liver transplant as the scarring can be so extensive that your liver stops functioning effectively.

Liver pain after drinking is a serious issue that could signal the presence of a fatty liver, alcoholic hepatitis, or liver cirrhosis. If you experience liver pain after drinking, contact your doctor so they can diagnose whether you have liver disease and which stage it is. Drinking heavily may cause irreparable damage to your liver and your health, therefore, adhering to the guidelines set by the Centers for Disease Control and Prevention, recommending a maximum of two drinks a day for men and one drink a day for women, is the best prevention strategy.

6 signs that your liver is in trouble

Liver health is often overlooked, but it really shouldn’t be. The liver is responsible for over 500 different functions, and when it’s unhealthy, our overall health is affected as well. Unfortunately, the symptoms of a liver problem aren’t as clear-cut as the signs of other ailments. While aching stiff joints may indicate a joint problem, or chest pain makes you think about your heart health, liver conditions are manifested differently, so it’s important to be aware of the common symptoms that may prompt you to get your liver checked out.

Below are six symptoms associated with liver disease that you should never ignore.

Yellow skin: This one you may have heard of before, and it’s known as jaundice. The skin will have a yellowish color as a result of a bilirubin buildup in the blood. When the liver is diseased, it has a hard time breaking down bilirubin, so higher amounts of this compound will end up in the blood.

Change in urine or stool color: Just as the skin can appear a different color, so can your stool or urine. Your urine may be dark and your stool pale.

Itchiness: Although there is no visible rash in sight, your skin may feel itchy all over as a result of liver disease.

Unexplained bruising: In liver disease, bruising occurs far easier as the production of proteins essential for blood clotting slows down or is stopped altogether.

Swelling: Poor liver function causes water retention in the abdomen and legs, so patients may find these areas swollen.

No symptoms: Unfortunately, sometimes liver problems will not present any symptoms, and when the symptoms do appear it may often be at the advanced stages of the disease. Research has shown that nearly half of liver disease patients do not present any symptoms or symptoms are very non-specific such as fatigue, tiredness, lack of drive, and only occasional itchiness.

If you suspect your liver isn’t working as it should, or if you have risk factors for liver disease such as obesity or excessive alcohol consumption, speak to your doctor about ways to slow down its progression and treat your liver.

When we think of our liver health, the first thing that comes to mind is probably the impact of alcohol. But did you know that even if booze is off your menu, your liver is still at risk for disease?

You see, the number of cases of non-alcoholic fatty liver disease (NAFLD) is growing as a result of another increasingly common problem in America that is obesity. NAFLD is not caused by alcohol consumption, but rather the intake of fat, which accumulates in and around the liver. The result? The food that we eat is making our livers sick.

Though, to be completely fair, it’s not just about what we eat – but also about how much we eat.

In America, we have a portion control problem. Everything we eat is supersized and it seems that when we do get served a recommended amount it just isn’t enough. Buffets and all-you-can-eats are flourishing. Eating too much has become a pressing issue, there’s no doubt in that.

The researchers found a link between two molecules – one that stores fat and the other that promotes fat-burning energy. These molecules complement each other in order to maintain a healthy level of fat in the liver. When these molecules are removed from the liver, toxic fat builds up, leading to the development of an aggressive and lethal form of non-alcoholic steatohepatitis (NASH) in mice.

The findings are important because they shed light on possible new ways of treating liver disease as a result of overeating.

After we eat a meal, the fat is absorbed by the liver and is either stored in the form of triglycerides or burned off for energy. The decision to burn fat relies on numerous factors, but the study found that the enzyme histone deacetylase 3 (HDAC3) and the protein SREBP are two critical regulators in this case.

Lead researcher Mitchell Lazar explained, “Based on what we first knew about these two molecules, we were expecting a tug of war that would fall somewhere in-between if we took them both away, either too little fat or too much in the liver. Instead, it led to an accumulation of toxic fat and a complete energy drain on the mice that caused inflammation, liver damage, and ultimately death.”

“It’s really two molecular pillars holding up a central ‘building’ to prevent liver toxicity. This work shows that on a normal fat diet these two molecules hold down the fort in the mice,” Lazar added.

Lazar concluded, “These findings could serve as a model, in a short and acute way, of toxicity of fat in the liver that we can use to look for drugs that target these molecules to reverse or stop the damage.”

Until treatments can be developed based on the research findings, it’s a wise decision to moderate your food consumption and avoid overeating in order to reduce the amount of fat reaching your liver and leading to disease.