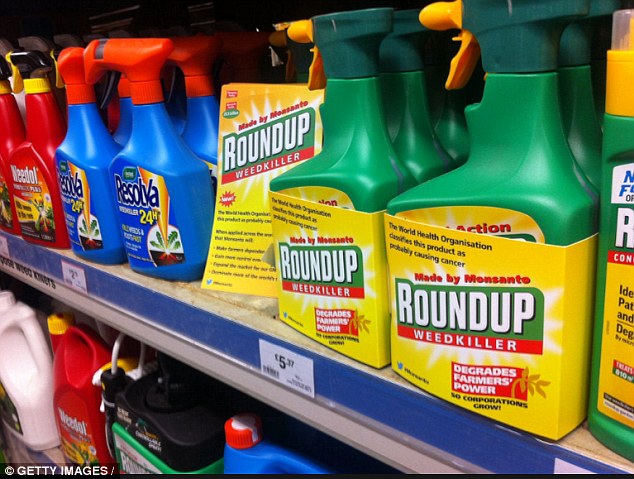 Britain’s most used pesticide is linked to a serious liver disease which can be fatal, shocking new study claims

By Sean Poulter Consumer Affairs Editor For The Daily Mail

A weedkiller commonly used on UK food crops and gardens has been linked to a serious liver disease by British academics.

Minute quantities of glyphosate, sold under the brand name Roundup by Monsanto, caused a fatty liver disease in a feeding study using rats.

The research was led by Dr Michael Antoniou, of Kings College, London, who said the findings raise serious concerns for human health.

He called on regulators to re-think both the use of Roundup on farms and the risk to humans caused by residues in food.

The medical condition linked to the weedkiller is non-alcoholic fatty liver disease (NAFLD), which is usually found in people who are overweight or obese.

Minute quantities of glyphosate, sold under the brand name Roundup by Monsanto, caused a fatty liver disease in a feeding study using rats

Dr Antoniou said: ‘The findings of our study are very worrying as they demonstrate for the first time a causative link between an environmentally relevant level of Roundup consumption over the long-term and a serious disease.

‘Our results also suggest that regulators should reconsider the safety evaluation of glyphosate-based herbicides.’

Glyphosate or Roundup is the most commonly used weedkiller on British farms and around the world. It is also sold as a weedkiller for household gardens.

Significantly, the chemical is a mainstay of GM farming, particularly in the United States.

GM crops like soya and corn or maize have been modified in the laboratory by companies like Monsanto to make them immune to spraying with Roundup.

This means that farmers can douse their crops with the chemical which kills off any weeds but allow the food plants to survive.

There is recent research to show that low levels of weedkiller residues from these plants end up in the human diet in the USA in everything from breakfast cereals to corn snacks and biscuits.

The medical condition linked to the weedkiller is non-alcoholic fatty liver disease, which is usually found in people who are overweight or obese (stock)

Supporters of GM farming, such as the former Conservative Food and Farming Secretary, Owen Paterson, have used the fact GM crops and farming techniques have been used in the USA for 20 years as proof they are safe.

The British research, which has been peer-reviewed by experts to ensure the study was properly conducted, is the first to identify a risk to human health.

Dr Robin Mesnage, a research associate at Kings, said: ‘The concentration of glyphosate that was added to the drinking water of the rats corresponds to a concentration found in tap water for human consumption.

‘It is also lower than the contamination of some foodstuffs.’

The team examined the livers at a molecular level and found evidence of cell damage, serious fatty liver disease and areas of dead tissue or necrosis.

They concluded: ‘The study is unique in that it is the first to show a causative link between consumption of Roundup at a real-world environmental dose and a serious disease condition.

Non-alcoholic fatty liver disease is the term for a range of conditions caused by a build-up of fat in the liver.

It’s usually seen in people who are overweight or obese.

A healthy liver should contain little or no fat. It’s estimated that up to one in every three people in the UK has early stages of NAFLD where there are small amounts of fat in their liver.

Early-stage NAFLD doesn’t usually cause any harm, but it can lead to serious liver damage, including cirrhosis – which can be deadly, if it gets worse.

Having high levels of fat in your liver is also associated with an increased risk of problems such as diabetes, heart attacks and strokes.

If detected and managed at an early stage, it’s possible to stop NAFLD getting worse and reduce the amount of fat in your liver.

‘These results demonstrate that long-term consumption of an ultra-low, environmentally relevant dose of Roundup at a glyphosate daily intake level of only 4 nanograms per kilogram of body weight per day, which is 75,000 times below EU and 437,500 below US permitted levels, results in non-alcoholic fatty liver disease.

‘Regulators worldwide accept toxicity studies in rats as indicators of human health risks. Therefore, the results of this latest study may have serious consequences for human health.’

The fact the research has been peer reviewed and published in the journal Scientific Reports means the methods have been scrutinised and verified.

The Crop Protection Association, which speaks for Monsanto and other chemical companies, questioned the validity of the King’s study.

The CPA said: ‘Glyphosate is amongst the most thoroughly tested herbicides on the market, and those studies by expert regulators have consistently concluded that glyphosate does not pose a risk to public health.

‘Glyphosate is a crucial tool in a farmers’ armoury. To put things in perspective, glyphosate is less toxic than baking soda, table salt, the caffeine in our coffee and many other products we all use or consume regularly.’