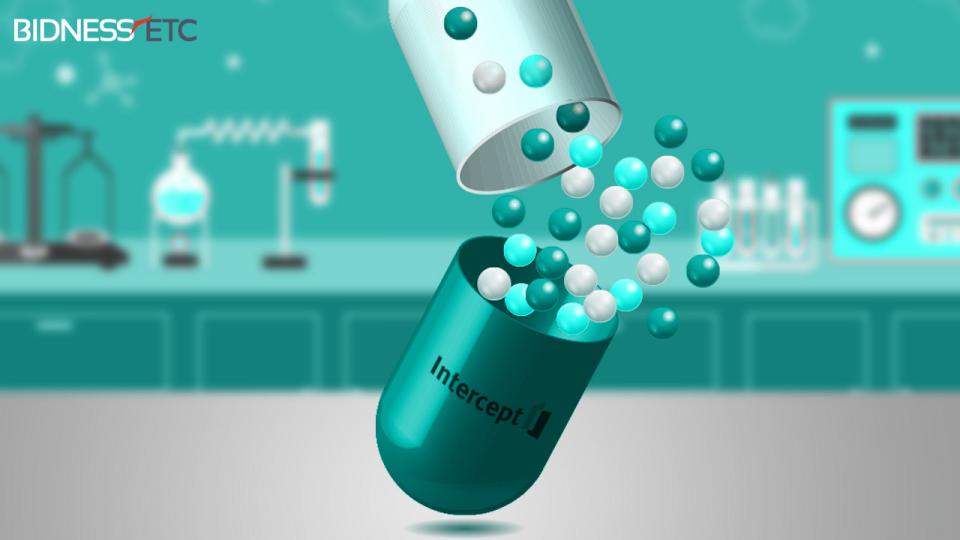 NEW YORK, Aug. 17, 2016 (GLOBE NEWSWIRE) — Intercept Pharmaceuticals, Inc. (Nasdaq:ICPT), a biopharmaceutical company focused on the development and commercialization of novel therapeutics to treat non-viral, progressive liver diseases, today announced that the New England Journal of Medicine published the key results of the Phase 3 POISE trial of Ocaliva (obeticholic acid) for the treatment of patients with primary biliary cholangitis, formerly known as primary biliary cirrhosis (PBC). On a background of standard of care or given as monotherapy, Ocaliva met the primary endpoint of the POISE trial and improved multiple biochemical disease markers as compared to placebo with high statistical significance.

The POISE trial evaluated the safety and efficacy of once-daily treatment with Ocaliva in PBC patients with an inadequate therapeutic response to, or who are unable to tolerate, ursodeoxycholic acid (UDCA). The trial’s primary endpoint was a reduction in alkaline phosphatase (ALP) to below a threshold of 1.67 times the upper limit of the normal range, with a reduction of at least 15% from baseline, and a total bilirubin level at or below the upper limit of the normal range after 12 months of Ocaliva therapy. These liver biomarkers have been shown to be reasonably likely to predict progression to liver failure and resulting liver transplant or premature death in patients with PBC. Ocaliva 5-10 mg (46%) and Ocaliva 10 mg (47%) were both statistically superior to placebo (10%) in achieving the primary endpoint (p<0.001). Most Ocaliva-treated patients had liver biochemical improvements even if they did not achieve the composite primary endpoint, with a significantly higher percent of patients achieving ≥15% ALP reduction with Ocaliva 5-10 mg and Ocaliva 10 mg (both groups 77%) compared to placebo (29%) (p<0.001). The majority of patients (93%) continued receiving UDCA therapy during the trial.

“The POISE data support Ocaliva as an important new treatment option for the substantial group of PBC patients who have an inadequate response to, or cannot tolerate, UDCA and therefore remain at risk of adverse outcomes,” said Frederik Nevens, M.D., Ph.D., University Hospitals Leuven & KU Leuven, Belgium, and the lead author of the paper. “For nearly 20 years, we only had one option to help our PBC patients. The introduction of Ocaliva provides physicians and patients with an opportunity to rethink treatment goals and take action when ALP and/or bilirubin remain elevated despite UDCA therapy.”

On May 27, 2016, the U.S. Food and Drug Administration (FDA) granted accelerated approval to Ocaliva for the treatment of PBC in combination with UDCA in adults with an inadequate response to UDCA, or as monotherapy in adults unable to tolerate UDCA. An improvement in survival or disease-related symptoms has not been established.

In addition to the primary composite endpoint, the POISE study evaluated the effect of Ocaliva on biochemical disease markers of PBC using descriptive statistics with nominal p-values. ALP improved in both Ocaliva groups versus placebo at all visits (p<0.001), with reductions from baseline of -113±14 U/L in the Ocaliva 5-10 mg group and -130±15 U/L in the Ocaliva 10 mg group, compared to -14±15 U/L for placebo at 12 months. Reductions were observed as early as two weeks and were maintained at each time point thereafter. There was additional benefit observed in patients who titrated from 5 mg to 10 mg, compared to those who remained on a 5 mg dose.

Additional exploratory secondary analyses indicated that other liver enzymes (gamma-glutamyl transferase, alanine transaminase, aspartate transaminase and conjugated bilirubin) all improved from baseline in both Ocaliva groups (p<0.001 for all end of study evaluations compared with placebo).

Pruritus (itch) is the most common symptom in patients with PBC and was also the most common adverse event in the trial, with a higher incidence reported in the Ocaliva 5-10 mg (56%) and Ocaliva 10 mg (68%) groups, compared to placebo (38%). The implementation of the Ocaliva 5-10 mg titration strategy decreased the incidence of pruritus and was associated with a lower discontinuation rate due to pruritus (one patient, 1%) compared with starting at a higher dose of 10 mg (seven patients, 10%). Additional side effects observed during the trial included fatigue, abdominal pain and discomfort, rash, oropharyngeal pain, dizziness, constipation, arthralgia, thyroid function abnormality, and eczema.

High density lipoprotein cholesterol, which was elevated at baseline (consistent with PBC-associated hyperlipidemia), decreased within two weeks in Ocaliva-treated patients, but stabilized and remained within the normal range after 12 months.

In an exploratory assessment, the rates of bone fracture were similar among the trial groups, but dual energy X-ray absorption indicated a smaller decrease in femoral bone mineral density T-score in both Ocaliva groups versus placebo (p<0.05).

The majority (97%) of the patients who completed the double-blind phase of the POISE trial entered an open-label extension (which will continue for five years). Patients who had received Ocaliva in the double-blind phase experienced sustained improvements in ALP and bilirubin, demonstrating a durable response through two years of treatment. Placebo patients initiating treatment with Ocaliva in the open-label extension demonstrated similar improvements in ALP and bilirubin to the Ocaliva-treated patients in the double-blind phase, including reversal of previous increases in total bilirubin to levels comparable to baseline.

About Primary Biliary Cholangitis, Formerly Known as Primary Biliary Cirrhosis
Primary biliary cholangitis (PBC) is a rare, autoimmune cholestatic liver disease that puts patients at risk for life-threatening complications. PBC is primarily a disease of women, afflicting approximately one in 1,000 women over the age of 40. If left untreated, survival of PBC patients is significantly worse than the general population.

About the POISE Trial
The POISE trial studied the safety and efficacy of once-daily treatment with Ocaliva in PBC patients with an inadequate therapeutic response to, or who are unable to tolerate UDCA, the current standard of care. Of 216 patients randomized to three treatment arms—placebo, Ocaliva 5 mg titrated to 10 mg or Ocaliva 10 mg—93% continued receiving UDCA. The Ocaliva 5-10 mg titration group received Ocaliva 5 mg for six months, after which dosing was increased to 10 mg based on tolerability and biochemical response. The trial’s primary endpoint was a reduction in ALP to below a threshold of 1.67 times the upper limit of normal, with a minimum of 15% reduction in ALP level from baseline, and a normal bilirubin level after 12 months of therapy.

About Ocaliva® (obeticholic acid)
Ocaliva is an agonist for FXR, a nuclear receptor expressed in the liver and intestine. FXR is a key regulator of bile acid, inflammatory, fibrotic, and metabolic pathways.

Ocaliva is indicated in the United States for the treatment of primary biliary cholangitis (PBC) in combination with ursodeoxycholic acid (UDCA) in adults with an inadequate response to UDCA, or as monotherapy in adults unable to tolerate UDCA.

This indication is approved under accelerated approval based on a reduction in alkaline phosphatase (ALP), as a surrogate endpoint which is reasonably likely to predict clinical benefit, including an improvement in liver transplant free-survival. An improvement in survival or disease-related symptoms has not been established. Continued approval for this indication may be contingent upon verification and description of clinical benefit in confirmatory trials. Intercept is currently enrolling COBALT, a Phase 4 clinical outcomes trial of Ocaliva in patients with PBC with the goal of confirming clinical benefit on a post-marketing basis.

A marketing authorization application for Ocaliva for the treatment of PBC was accepted by the European Medicines Authority (EMA) in June 2015 and is currently under review. The brand name Ocaliva has been provisionally approved by the EMA.

Ocaliva is contraindicated in patients with complete biliary obstruction.

In two 3-month, placebo-controlled clinical trials, a dose-response relationship was observed for the occurrence of liver-related adverse reactions including jaundice, ascites and primary biliary cholangitis flare with dosages of Ocaliva of 10 mg once daily to 50 mg once daily (up to 5-times the highest recommended dosage), as early as one month after starting treatment with Ocaliva.

Monitor patients during treatment with Ocaliva for elevations in liver biochemical tests and for the development of liver-related adverse reactions. Weigh the potential risks against the benefits of continuing treatment with Ocaliva in patients who have experienced clinically significant liver-related adverse reactions. The maximum recommended dosage of Ocaliva is 10 mg once daily. Adjust the dosage for patients with moderate or severe hepatic impairment.

Management strategies include the addition of bile acid resins or antihistamines, Ocaliva dosage reduction and/or temporary interruption of Ocaliva dosing.

Monitor patients for changes in serum lipid levels during treatment. For patients who do not respond to Ocaliva after one year at the highest recommended dosage that can be tolerated (maximum of 10 mg once daily), and who experience a reduction in HDL-C, weigh the potential risks against the benefits of continuing treatment.

Safe Harbor Statements
This press release contains “forward-looking statements” within the meaning of the Private Securities Litigation Reform Act of 1995, including, but not limited to, statements regarding the clinical relevance and utility of ALP and the surrogate endpoint used in the Phase 3 POISE trial to predict clinical outcomes, the acceptance of Ocaliva® (obeticholic acid) as a treatment for PBC by healthcare providers, patients and payors, the potential regulatory approval and launch of OCA in PBC outside the United States and the timelines related thereto, the anticipated prevalence of and other epidemiological estimates and market data related to PBC, the continued development of OCA and Intercept’s other product candidates, and our strategic directives under the caption “About Intercept.” These “forward-looking statements” are based on management’s current expectations of future events and are subject to a number of important risks and uncertainties that could cause actual results to differ materially and adversely from those set forth in or implied by such forward-looking statements. These risks and uncertainties include, but are not limited to: Intercept’s ability to successfully commercialize Ocaliva in PBC, and Intercept’s ability to maintain its regulatory approval of Ocaliva in the United States for Ocaliva in PBC; the initiation, cost, timing, progress and results of Intercept’s development activities, preclinical studies and clinical trials; the timing of and Intercept’s ability to obtain and maintain regulatory approval of OCA in PBC in countries outside the United States and in indications other than PBC and any other product candidates it may develop such as INT-767; conditions that may be imposed by regulatory authorities on Intercept’s marketing approvals for its product candidates such as the need for clinical outcomes data (and not just results based on achievement of a surrogate endpoint), and any related restrictions, limitations, and/or warnings in the label of any approved product candidates; Intercept’s plans to research, develop and commercialize its product candidates; Intercept’s ability to obtain and maintain intellectual property protection for its product candidates; Intercept’s ability to successfully commercialize OCA in indications other than PBC and its other product candidates; the size and growth of the markets for Intercept’s product candidates and its ability to serve those markets; the rate and degree of market acceptance of any of Intercept’s products, which may be affected by the reimbursement that it may receive for its products from payors; the success of competing drugs that are or become available; the election by Intercept’s collaborators to pursue research, development and commercialization activities; Intercept’s ability to attract collaborators with development, regulatory and commercialization expertise; regulatory developments in the United States and other countries; the performance of third-party suppliers and manufacturers; Intercept’s need for and ability to obtain additional financing; Intercept’s estimates regarding expenses, future revenues and capital requirements and the accuracy thereof; Intercept’s use of cash, short-term investments and the proceeds from the offering; Intercept’s ability to attract and retain key scientific or management personnel; and other factors discussed under the heading “Risk Factors” contained in our annual report on Form 10-K for the year ended December 31, 2015 filed on February 29, 2016 as well as any updates to these risk factors filed from time to time in our other filings with the Securities and Exchange Commission. All information in this press release is as of the date of the release, and Intercept undertakes no duty to update this information unless required by law.