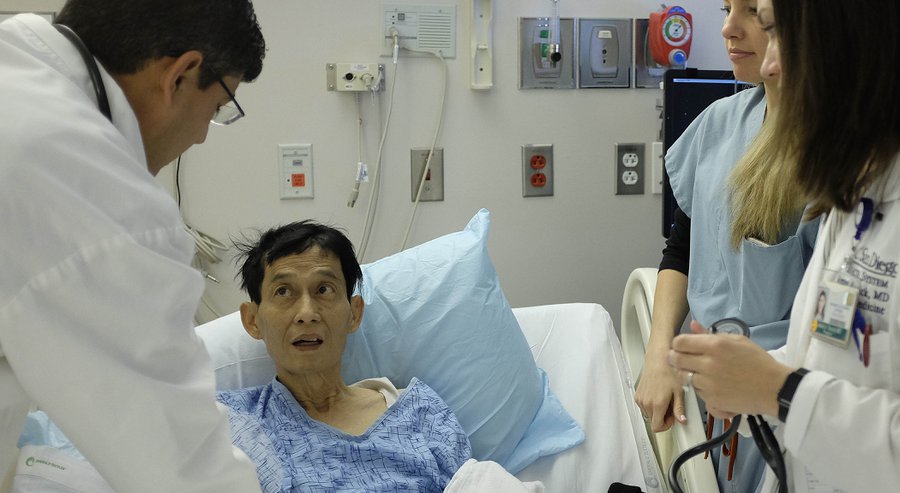 UC San Diego has brought together a wide-ranging team of doctors and scientists to fight a mammoth health risk largely unknown to the public: liver disease not caused by consumption of alcohol.

Around 75-100 million Americans are estimated to have Nonalcoholic Fatty Liver Disease, or NAFLD, characterized by excessive fat deposits in the liver. It’s related to diet and obesity, but also has genetic components, making for a complex pattern of causation. Moreover, the disease course is hard to predict.

Most people experience no symptoms, which makes the disease difficult to catch. In perhaps 25 percent of cases, NALFD can progress to more serious or even fatal conditions. These include an inflammatory disease called Nonalcoholic Steatohepatitis, or NASH, and onward to scarring or fibrosis, cirrhosis, liver cancer and liver failure. In the end stages, patients often die unless they can get a liver transplant.

UC San Diego’s NAFLD Research Center unites experts in liver disease treatment with those in other fields, including bioengineering, software development, imaging, systems biology and the microbiome. The goal is to improve diagnosis, understanding of how the disease originates and progresses, and to find preventives and cures, said the center’s director, Dr. Rohit Loomba, a professor of medicine in the Division of Gastroenterology at UC San Diego.

“The center puts everything together for our patients and participants,” Loomba said. The center can be reached at j.mp/nafld.

Other UCSD members include Dr. David Brenner, MD, dean of the School of Medicine; Larry Smarr, founding director of California Institute for Telecommunications and Information Technology; and Shankar Subramaniam, a bioengineering professor at the Jacobs School of Engineering.

There appears to be no other center like UCSD’s in the country, solely focused on nonalcoholic liver diseases, said liver specialist Dr. Peter Traber, president emeritus of Baylor College of Medicine in Houston. And the need is great.

“Fatty liver disease is a silent epidemic that’s going to dominate liver disease over the next decades,” said Traber, now CEO of Galectin Therapeutics in Norcross, Ga. Galectin is developing a treatment for NASH.

“It parallels the increase in obesity and diabetes in the society,” Traber said. That places nonalcoholic liver disease in the company of similar associated diseases, such as hypertension, heart disease and arthritis, he said.

“You get fat in the liver, and that causes inflammation in the liver, and cell death, and that leads to scarring of the liver,” Traber said. “When the scarring becomes advanced, then it’s called cirrhosis. And at that point, people either need a liver transplant or they succumb to their disease.”

One important clinical question is how to identify the factors that causes people to progress from asymptomatic disease to more severe liver disease, Loomba said. There’s no reliable way now to tell.

“Among the 25 million who are at risk, we believe there are 2 million patients who have NASH-related cirrhosis, in the United States,” Loomba said. “They just don’t know about it.”

Of those examined, 65 percent had non-alcoholic fatty liver disease, and about 7 percent had advanced fibrosis. One of the patients with advanced fibrosis also was found to have liver cancer. The results were recently published in the journal Alimentary Pharmacology and Therapeutics.

“Once we saw that data, we decided that as a center we are going to change practice,” Loomba said. “we want to develop a screening program for patients with advanced liver disease in patients with type 2 diabetes.”

New treatments are under development, Loomba said, so eligible patients can be given the option of trying these experimental therapies.

“The center is already plugged into novel therapies for NASH,” he said. “So if there is a new therapy for NASH available anywhere in the world, we will have it.”

In addition, the center is studying the genetics of fatty liver disease, Loomba said. Part of this is studying twins.

“Any twin living in Southern California can come on by. We scan their liver for fat quantification, and to quantify fibrosis. We found that liver fat is heritable. We also found for the first time, that hepatic fibrosis, or scarring in the liver, is also heritable.”

More information on that study can be found at j.mp/livertwin.

Biotech companies in the United States are among those developing liver disease therapies. Galectin, Traber’s company, is developing one. Another is San Diego’s Conatus Pharmaceuticals, which is testing an experimental drug called emricasan that inhibits liver inflammation.

On Feb. 3, Conatus said it had received “fast track” designation for use in NASH cirrhosis along with NASH fibrosis. The company is testing whether by relieving inflammation, emricasan will promote healing, ultimately allowing the liver’s regenerative powers to repair damage.

“I think consolidating it is a really good move,” Mento said. “I know that Dr. Loomba has been working for a while on non-invasive procedures that can identify patients who have fatty liver disease and progressed to NASH. Not only do they not have any symptoms, right now the only way to diagnose is with a liver biopsy, which is not very convenient.”

Loomba said UC San Diego researchers have made progress toward that end, with the new imaging to monitor patient response to treatment in early clinical trials. This eliminates the need for a liver biopsy for assessment, and allows non-invasive monitoring of patients to find early signs of efficacy.

Conatus has ties with some of the researchers at the new center, Mento said, including sponsoring research in the lab of Dr. Ariel Feldstein, who practices at UCSD and Rady Children’s Hospital. A study in mice examined the effect of emricasan on portal hytertension.

In human trials, emricasan demonstrated in a Phase 2 trial that it lowers portal hypertension, Conatus said in September. And UCSD will be included in a clinical study of the drug for NASH fibrosis.

“It’s really good to have a local team interested in this space,” Mento said.

The center is temporarily operating out of existing space, Loomba said. The center will move its clinical work into the Altman Clinical and Translational Research Building next to Thornton Hospital in La Jolla after that building is complete. This will include the imaging program. Basic research, such as the effect of the microbiome on liver function, will continue where they are now.

Posted in Fatty Liver and Nash, In The News and tagged diet, fatty liver disease, FLD
← Alcohol Also Damages the Liver by Allowing Bacteria to InfiltrateJogging and Other Aerobic Exercises Could Protect Liver From Alcohol-Related Inflammation and Injury →