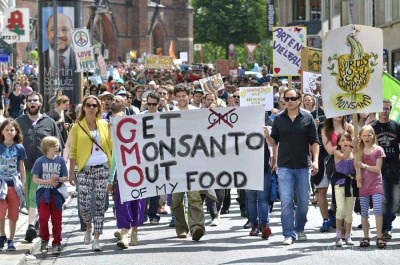 Within just a few weeks, two studies were published in the peer-reviewed journal Scientific Reports that cast new doubts on the safety of genetically modified foods and glyphosate herbicide. The first found that a genetically modified corn, NK 603, was not substantially equivalent to a non-GMO counterpart, which is contrary to claims of GMO proponents. The second study found that glyphosate, the main ingredient in Monsanto’s Roundup herbicide, can cause a serious liver disease at doses thousands of times lower than that allowed by law.

Dr. Michael Antoniou, Head of the Gene Expression and Therapy Group at King’s College London in the United Kingdom, led the ground-breaking research.

The main focus of research within Dr. Antoniou’s group is the study of the molecular mechanisms of the regulation of gene function. He has used these discoveries to develop efficient gene expression systems for efficacious and safe biotechnological applications, including gene therapy.

More recently, Dr. Antoniou has expanded his research program to include using molecular profiling “omics” methods in evaluating the safety of foods derived from GMO crops, low dose exposure from their associated pesticides, and other chemical pollutants.

Dr. Antoniou is also a co-author of GMO Myths and Truths, an evidence-based examination of the claims made for the safety of genetically modified crops and foods.

I recently interviewed Dr. Antoniou about his newly published studies.

Please summarize the findings of your study showing that the GMO corn NK 603 was not substantially equivalent to a non-GMO corn.

Dr. Michael Antoniou: We used a modern in-depth compositional analysis to test the claim that a genetically engineered corn variety, NK603, was substantially equivalent to an isogenic non-GMO counterpart.

The establishment of substantial equivalence is a foundation for safety evaluation of GMO crops. In the United States and in other countries, the crops that have been commercialized are claimed to be substantially equivalent to non-GMO equivalents, and therefore safe.

But the kind of compositional analyses done thus far to see if a GMO crop is substantially equivalent is a crude nutritional analysis of total protein, fats, and vitamins.

If you use cutting-edge molecular profiling methods as we did, they will provide a spectrum of different types of proteins and small molecule metabolites. It’s a very in-depth analysis.

Does the claim of substantial equivalence stand up to this fine compositional analysis?

No, it doesn’t. Our analysis found over 150 different proteins whose levels were different between the GMO NK603 and its non-GMO counterpart. More than 50 small molecule metabolites were also significantly different in their amounts.

What do these differences indicate?

Dr. Antoniou: They indicate that there were changes in the protein profile that were reflective of an imbalance in energy metabolism and oxidative stress. In terms of metabolite changes, the most pronounced were increased levels of two polyamines. These polyamines, putrescine and especially cadaverine, can be toxic in certain contexts when consumed in large amounts.

The bottom line of the paper is that once you do a compositional analysis properly, the GMO corn doesn’t stand up to claims of substantial equivalence. This questions the validity of a key step in the GM corn’s approval process.

A more detailed safety evaluation should have been conducted for this corn.

What about the criticisms from supporters of GMO crops?

Dr. Antoniou: There have been vociferous attacks, and we have dealt with them in a rational, evidence-based way. We have posted four extensive rebuttals.

For example, critics said we had to compare the GMO corn with many other non-GMO varieties to see the range of “natural variation.” But comparing with more varieties has the effect of hiding the differences—the exact opposite of what we were trying to do.

Our aim was to analyze to see any effect of the GM transformation process, so the only scientifically valid comparator is the nearest possible isogenic non-GMO counterpart. When you do that, you find differences.

Tell me about the Roundup/glyphosate study.

Dr. Antoniou: For the very first time we have established a causative link between an environmentally relevant level of daily ingestion of Roundup and a serious disease, non-alcoholic fatty liver disease.

We used cutting edge compositional analytical methods to determine the health status of rats’ livers. Protein and metabolite profiles are a direct measure of the composition of organs and give a direct readout of the health or disease status of organs. We found that these organs weren’t healthy. There were clear hallmarks of non-alcoholic fatty liver disease, which correlated with previous observations of an increased incidence of tissue necrosis or liver tissue replaced with scars.

We were able to make a direct statement that Roundup caused disease.

Roundup is a hitherto unknown and unsuspected potential risk factor for non-alcoholic fatty liver disease that calls for further investigation. Twenty-five percent of the U.S. population suffers from non-alcoholic fatty liver disease. Risk factors include obesity, diabetes, and high blood fat levels. But there are risk factors for the disease that have not yet been identified, and it’s possible that exposure to Roundup could be one such missing risk factor.

What are key takeaways of the study?

Dr. Antoniou: First, the rats consumed a glyphosate-equivalent level of Roundup that is 75,000 times lower than what is permitted in Europe and 437,500 times lower than that allowed in the U.S. Our study results suggest that the permitted safety intake level of glyphosate-based herbicides needs to be revisited as they may have been set way too high.

The second point that this is a new risk factor for non-alcoholic fatty liver disease and needs to be taken into account by the medical establishment.

What are your thoughts about genetic engineering of foods?

Dr. Antoniou: I’ve maintained all along that when you take a look at the GMO transformation process—whether inserting genes or using newer methods, such as gene editing—and place these methods in the context of new genetics, which tells us that no gene or its protein product works in isolation, then you can expect problems from these genetic engineering procedures. Genes and their protein products work together in a highly complex, interactive, and integrated network. From the holistic perspective of gene organization, control, and function, the GMO transformation process is technically and conceptually flawed. It’s inevitable that there will be problems; it’s just a matter of degree. This is what basic science tells us.

And when GMOs are added to their associated pesticide residues, as a package, they become a potentially very harmful product.

Technologies like genetic engineering in agriculture must be re-evaluated for safety as the science shifts. If, as we do this, we find that it is not a predictable and safe technology, we need to have the courage to say “no” and look at different ways to achieve our goals because what we are doing is clearly disruptive.

Here are links to the studies published by Dr. Antoniou and his team:

Here are rebuttals to criticisms of the NK603 GMO corn study:

http://www.nature.com/articles/srep37855#comments (2 postings in response to others’ comments)