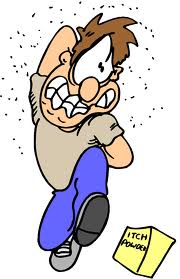 Just about as common as fatigue in PBC, itching (pruritus) of the skin affects 66% of patients at some time during the disease. The itching tends to occur early in the course of the disease, when patients still have good liver function. As a matter of fact, itching can even be the initial symptom of PBC.

It is interesting to note that some women with PBC experienced itching during the last trimester (three months) of a prior pregnancy, before they knew about their PBC. In a condition called cholestasis of pregnancy, some otherwise normal women during the last trimester develop cholestasis and itching that resolve following delivery. (Remember that cholestasis means decreased bile flow.) Of course, most women with cholestasis of pregnancy do not go on to develop PBC. Yet, it turns out that about 5% of women diagnosed with PBC give a history of having had such itching during a prior pregnancy.

Characteristically, the itching in PBC begins in the palms of the hands and soles of the feet. Later, it may affect the entire body. The intensity fluctuates in a circadian rhythm, meaning that the itching can worsen at night and improve during the day. Nocturnal itching can disrupt sleep and lead to sleep deprivation, fatigue, and depression. Rarely, the itching is so severe and unresponsive to therapy that the person may become suicidal. Prolonged itching and scratching causes scratch marks (excoriations), thickening, and darkening of the skin.

The cause (etiology and pathogenesis) of itching remains unclear. The bile acids, as previously mentioned, normally are transported in bile from the liver, through the bile ducts, to the intestine. Most of the bile acids are then reabsorbed in the intestine and go back to the liver for reprocessing and recycling. In cholestasis, therefore, the bile acids back up from the liver, accumulate in the blood, and, for some years, were presumed to be the cause of the itching. Modern studies, however, have just about refuted the notion that the itching in PBC and other cholestatic liver diseases is caused by bile acids.

Recently, the itching was considered (postulated) to be due to accumulation of an endorphin, a natural substance that attaches (binds) to the natural receptors (acceptors) for morphine in nerves. You see, nerves in the skin carry the sensation of itching. Indeed, the finding that itching improved in some people treated with drugs that block the binding of morphine or endorphins to nerves supported this consideration. Yet, many patients do not respond to these blocking drugs, suggesting that other causes or mechanisms are involved in producing itching.