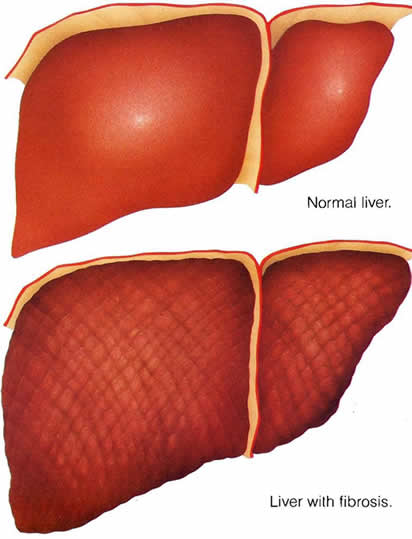 What is liver fibrosis?

Liver fibrosis is the scarring process that represents the liver’s response to injury. In the same way as skin and other organs heal wounds through deposition of collagen and other matrix constituents so the liver repairs injury through the deposition of new collagen.

Over time this process can result in cirrhosis of the liver, in which the architectural organization of the functional units of the liver becomes so disrupted that blood flow through the liver and liver function become disrupted.

Once cirrhosis has developed, the serious complications of liver disease may occur, including portal hypertension, liver failure and liver cancer. The risk of liver cancer is greatly increased once cirrhosis develops, and cirrhosis should be considered to be a pre-malignant condition.

Cirrhosis and liver cancer are now among the top ten causes of death worldwide, and in many developed countries liver disease is now one of the top 5 causes of death in middle-age.

The biology of liver fibrosis

The main liver cells that produce matrix are Hepatic Stellate Cells (HSC). This resident cell population exist in a resting phenotype as the body’s major store of vitamin A. However on activation they transform to adopt a myofibroblast phenotype capable of secreting collagen.

Liver fibrosis, previously thought to be merely the accumulation of scar tissue, is now recognized to be a dynamic process that can progress or regress over periods as short as months.

What are the causes of liver fibrosis?

All chronic liver diseases (CLD) can lead to liver fibrosis. Over many years the principle causes of CLD have been chronic viral hepatitis B (CHB) and alcoholic liver disease (ALD). While rates of alcoholism and ALD are falling in many countries, hazardous drinking amongst young people is resulting in alarming rates of ALD in several northern European countries.

Over the last few decades two other diseases have emerged to make a major contribution to the burden of CLD. Chronic hepatitis C (CHC) and non-alcoholic fatty liver disease (NAFLD) are recognized to have already had a major impact on CLD incidence.

Hepatitis C virus (HCV) is transmitted in blood and blood products through unsafe injection practices and the therapeutic use of infected blood products. It is thought that the world prevalence of CHC is nearly 200 million people.

In the developed world with rapidly increasing rates of obesity, NAFLD is considered to represent a major cause of significant fibrosis. Although it appears that only a minority of patients with NAFLD (maybe 20%) develop significant fibrosis, due to the vast prevalence of the at-risk overweight population, NAFLD may give rise to an epidemic of liver fibrosis.

Autoimmune diseases which are genetic in nature will progress into fibrosis and continue on to cirrhosis.

Primary Biliary Cholangitis has been thought to be an autoimmune disease however questions are now being asked about it's cause as it is thought that certain medicines containing acetaminophen may play a part in it's development.

Posted in Fibrosis, What Is? and tagged collagen, fibrosis, liver cirrhosis
← What is Cryptogenic Cirrhosis?What is HCV (Hepatitis C Virus)? →