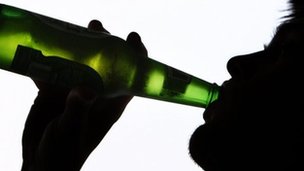 High levels of drinking and obesity mean England is one of the few places in Europe seeing a major preventative disease getting worse, the chief medical officer says.

Prof Dame Sally Davies highlighted the rise in liver-disease deaths in the under-65s – up 20% in a decade – in her annual report.

In comparison, most of the rest of Europe has seen rates fall.

She said urgent action was needed to discourage harmful lifestyles.

She said three of the major causes of liver disease – obesity, alcohol abuse and undiagnosed hepatitis infection – were all preventable.

Her study – the first volume of a two-part annual report – focused on a whole host of diseases from cancer to dementia.

But Dame Sally said it was the liver disease figures that most shocked her the most – and showed there needed to be investment in prevention, early diagnosis and effective treatment.

“I was struck by the data on liver disease particularly,” she said.

“This is the only major cause of preventative death that is on the increase in England that is generally falling in other comparable European nations.

“We must act to change this.”

The report comes after the government said earlier this year it would look to introduce a minimum price for alcohol. A consultation is expected to start soon.

“It’s imperative that we come together now to act swiftly and decisively to tackle this problem,” he said.

“Setting a minimum unit price at 50p is one of a number of measures which will help protect those most vulnerable to the harm caused by alcohol misuse and I urge the government to act quickly on this.”

Prof Mark Bellis, of the Faculty of Public Health, agreed, saying the figures were “embarrassing” and that tougher action was need on advertising as well as the introduction of minimum pricing.

Andrew Langford, chief executive of the British Liver Disease Trust, said the government needed to get the NHS to be more proactive too.

Posted in In The News
← Simeprevir is safe and effective with interferon/ribavirin'Rising tide' of liver disease due to obesity, alcohol and infections →