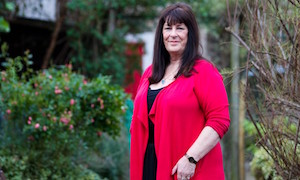 MOST people know nothing of the incurable liver illness Primary Biliary Cholangitis (formerly Cirrhosis), whose symptoms can be so agonising and so little understood that death can seem the only way out.

For the last two decades one Edinburgh woman has made it her mission to change that – spurred on by the Sunday Post and The Broons.

Collette Thain was a 38-year-old mum-of-two when she was told she had the condition and it would kill her within five years.

She breaks down as she relives that time: “I was so ill I couldn’t even play with my kids. Then I had to face leaving them forever.”

Today she is celebrating. Collette­ marks her 60th birthday in May and has just entered the 20th anniversary year of the PBC Foundation – a support group she set up from her kitchen table, providing a helpline and information leaflets.

The charity has burgeoned and now delivers self-management workshops around the UK, acts as an advisory body to the medical profession and helps 10,000 sufferers and their families in 71 countries.

But it has been a slow and tortuous haul, during which Collette lost her greatest support, her solicitor husband Leslie Thain.

Now happily remarried, she remembers: “When I was finally diagnosed I asked the doctor if there was any leaflet on the illness but there wasn’t.

There was no information out there at all and no support for sufferers.

If I’d had cancer there would have been.

Back then the condition – an autoimmune disease of the bile ducts in the liver with no known cause or cure – was wrongly associated with alcohol abuse and sufferers were given little sympathy.

Its symptoms can be terrible; excruciating joint pain, bleeding, lethargy and horrendous itching.

“One of my doctors told me about another sufferer who was so distressed by the itching which they were unable to treat that she threw herself off the Forth Road Bridge.”

She adds: “I couldn’t believe there was no support. I was quite literally dying to speak to someone else about it and so I wrote to The Sunday Post. I had so many letters back from people with PBC and their families.

They came from all over the world. My phone did not stop ringing.

“One couple said their daughter was not treated in time, had a bleed and died. That’s when I decided to set up a support group.”

And she smiles: “One of the Sunday Post cartoonists featured my name on a shop front in The Broons because a member of staff had a wife with the condition who had received help. It still hangs in the PBC Foundation office today!”

Collette’s nightmare began when she was a mum of 18. She recalls: “When I walked it felt like I was wading through tar. I suffered pain in my chest, arm and in my joints and had quite a lot of infections.

“It was thought I might have lead poisoning but that was ruled out.”

Work also became near impossible for Collette, who was then a fraud specialist for the Law Society of Scotland.

Collette waited three months to see a consultant who broke the news that the disease from which she was suffering was incurable and progressive.

She claims she had to battle to see a liver specialist who confirmed she had Primary Biliary Cirrhosis.

One of the organisation’s greatest achievements was to change the name of the disease from ‘cirrhosis’ to ‘cholangitis’ to rid it of the stigma of alchohol abuse.

“On a personal front, for me the outlook is unclear,” says Collette. “I could now be facing transplant. But as an organisation, we have come a long way.”