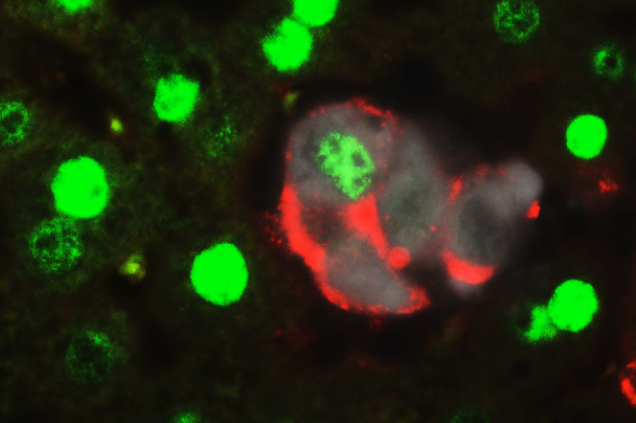 Photo credit: Picture shows a group of cells transitioning from a mature cell type (green) to a stem cell type (red). White cells are the cells where Hippo is being inactivated. Credit: Dean Yimlamai/Boston Children’s Hospital

Approximately 1 in 10 Americans have liver disease. Depending on the specific diagnosis, treatment can consist of anything from staying hydrated, to daily medication, to requiring a transplant. A group of scientists from the Harvard Stem Cell Institute (HSCI), led by Fernando Camargo, have discovered a pathway that converts mature liver cells into stem cells. In the future, this could possibly be used to revitalize diseased livers. The results of the study have been published in Cell.

The liver has been hailed for its regenerative properties for quite some time, as a living donor can give as much as 75% to someone who needs it, and the organ will regrow back to normal through normal mitosis. However, some have speculated that there are latent stem cells within the liver that also help repair less drastic liver damage. These results support that theory, and seem to have found a pathway that makes it possible.

The Hippo signaling pathway regulates cell proliferation and apoptosis, and helps organs to stop growing when they are fully developed. While the researchers were exploring whether or not Hippo affected cell fate, they accidentally discovered that it is capable of making mature, differentiated cells regress back into an undifferentiated state. Once the mature liver cells revert back into a stem cell-like state, they can go on to become the progenitor cells that will go on and develop into mature, healthy liver cells again. Essentially, they could help the liver rebuild itself from the inside out.

“People have been trying to use liver cell transplants for metabolic diseases since the early 90s, but because of the source of cells—discarded livers—they were unsuccessful,” Camargo said in a press release. “With this unlimited source of cells from a patient, we think that perhaps it’s time to think again about doing hepatocyte or progenitor cell transplants in the context of liver genetic disorders.”

In the study, the researchers cultured the reverted liver cells and then transplanted them into mice with genetic liver disease. As the stem cells matured over the next few months, their livers showed improvement from their diseased starting state. Future study will also explore how diseases such as hepatitis affect how the Hippo pathway suppression functions. Eventually, a drug could be developed that expedites the liver’s healing process.

“I think that maybe it is something that people have overlooked because the field has been so stem cell centric,” he continued. “But I think the bottom line is that the cells that we have in our body are plastic, and understanding pathways that underlie that plasticity could be another way of potentially manipulating regeneration or expanding some kind of cell type for regenerative medicine.”

Researchers from HSCI have made considerable progress over the last few years with discovering that mature cells aren’t as fixed as was once thought.

“I think this study highlights the tremendous plasticity of mature liver cells,” Camarago. “It’s not that you have a very small population of cells that can be recruited to an injury; almost 80 percent of hepatocytes [liver cells] can undergo this cell fate change.”

Source: http://www.iflscience.com/health-and-medicine/scientists-find-biological-%E2%80%9Cswitch%E2%80%9D-reverts-mature-liver-cells-stem-cells
Posted in In The News and tagged cells, genetics, stem cells, transplant
← 9 Natural Itch-Relief ApproachesLow uptake of HCV treatment in England will lead to substantial disease burden by 2035 →