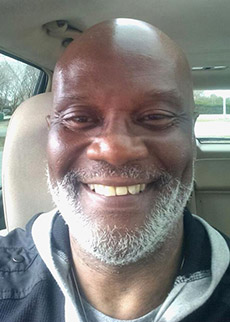 Tapping into his incredible drive and resolve, Johnson survives a liver transplant and graft-vs.-host disease 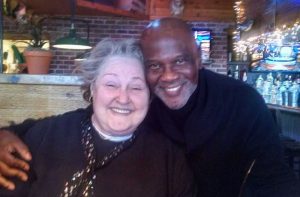 Ralph Johnson is photographed with his "spiritual friend."

On July 12, 2014, I underwent a liver transplant at the Hospital of the University of Pennsylvania in Philadelphia. At the time of the transplant, I was told I had the highest MELD Score (Model for End Stage Liver Disease) on the East Coast.

It was Saturday. My room looked out at the helicopter landing pad. I witnessed a person running from a helicopter into an adjacent building and returned after what seemed like hours (in reality, it was only about an hour) before ascending into the heavens like a noble angel.

Unbeknownst to me, my journey was about to begin. That moment I witnessed was my "GIFT OF LIFE." Ten to 12 hours later, after the surgery, I was making my first appearance in ICU. It was Sunday, lights were beaming, voices were active —voices asking questions, voices in transition, octave in sound and pitch, asking more questions. My responses were in the form of head and eyes gestures — nods and blinks. I was having thoughts about locations, places I have never seen or care to see again.

On Monday morning, I found myself alone in a room along with a silhouette in white or appeared white, with her back turned, then front side a soft face peering over me with a soft voice, like a whisper, saying words of encouragement. Shortly after the transplant team arrived, more voices, more whispers to each other; I felt a hand or hands touching me gently, my shoulder, hand and chest. More whispers to each other, my eyes closed then opened and I realized I was alone.

Tuesday was more of the same — another fade into somewhere I have never seen and not wanting to return.

Wednesday arrived; I was determined to get mobile. “Ralph,” I said to myself. “It is time to GET MOBILE!" I was in motion. My body told my mind this was pure anguish. I was mumbling the need to walk, to feel my legs. Assistance came ... gently we maneuver, sitting on the edge of the bed. Now plant your feet Ralph, feel the floor, stand hunched over grasping the IV pole in one hand, other arm tucked underneath the nurse’s shoulder.

I'm up I mumbled. Some gentle steps and words of caution, and I was MOBILE! Progress for me was quick — so quick that on July 19, the transplant team came into the room to tell me I should look forward to being discharged in the next couple of days.

They thought the longer I stayed there the more likely I could catch something that was going to make me sick. I was in full agreement, yet I was frightened to my very core.

On July 21, I was discharged. There was so some much to remember — what medications to take, dosage, when to take them, injections, referring back to the manual if I was not sure. I was scared and on my own. What was known to me only was I really had nowhere to go. One of my closest friends offered to allow me to stay at his residence. I accepted, but now it was August 2014. The biggest challenge of my life was ahead along with an immense challenge for the transplant team.

I received a phone call from the hospital asking what I was doing. My reply was stretching on the floor with exercise bands. They replied you need to get to the hospital. I said fine, I'll see you in the morning; their reply was NOW! If need be we will send a van for you.

It was around August 15th and I was back at the hospital— same floor, same nurses, different room. My white blood cell count was 0.437. Need I say more?

I had spots appearing on my back, buttocks, arms, hands and the skin on my feet was peeling. I contracted Graft versus Host Disease after a liver transplant. Not only had I contracted it, I was already 13 days into it. I was being eaten alive from the inside out. The disease was progressing so fast, it was surfacing on the exterior of my body.

I was fighting for my life in August and September — mentally, physically, and spiritually as death awaited my presence. From that point on I adopted two songs that became my anthem: Frank Sinatra’s “I Did It My Way” and “That’s Life.” 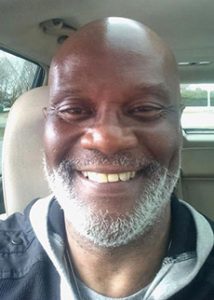 Ralph turned to Frank Sinatra for inspiration when recovering from a liver transplant and battling graft-vs.-host disease.

Then I got busy. Adjacent from my room was the employee stairwell. I reserved a space in there. Constantly working out, exercise bands, latex gloves on my hands for pull ups, pushups, squats, in progression of tens. Walking the unit constantly, the only time I was in the bed was for sleep. Honestly I did not do much of that. I heard the voices of the nurses calling out to each other … "Has anyone seen Mr. Johnson?" Reply: "CHECK THE STAIRWELL."

The third week in September with medication — lots of various medication — I had a white cell blood count 3.7. I was going to beat this! Platelets count in the upper thousands. I turned the corner. Doctors were coming to the room with smiles on their faces. Laughter was in abundance and the talk of things to come in every sentence.

Fast forward to May 2015: No signs of GHVD in the blood, remaining spots in certain areas.

I had been days away from hospice on July 12, 2014, and weeks, days, minutes, seconds away from death at the hands of GVHD.

Are there other survivors? I need to know, I need to hear their voice, their story, their thoughts; what did they bear witness to, spiritually, mentally, physically, what family support was there; not only for those that might have survived, but those that put valor in the struggle until the end.

Where are the voices, family, friends, and survivors? I want to know of you, you of me, we have a connection. Let me be helpful, let me hear your voice, share your fears and beliefs.

I return frequently to the Pavilion on the fourth floor where I almost loss my life. I walk the halls trying to connect, projecting a symbol of hope. Embracing the staff that remains and speaking with others that might have heard my story.

Every story matters. Help us build OUR community by sharing your story.