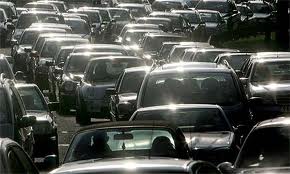 The Road to Hell is an album and track by Chris Rea which is about the nightmare traffic jams on the M25 around London.

In many ways our Portal Vein becomes our Road to Hell when things go wrong with our livers. The liver should be a smooth, permeable  organ that allows a free flow of blood through it. Amongst the multitude of things the liver does it also controls a 'back pressure' in the portal vein.

Of course when cirrhosis hits us everything 'goes to hell' on the back of a truck!

No one is quite sure which parts of the liver become affected by cirrhosis so as to alter the way it controls the back pressure, but the damage done causes the liver to become constricted with a resultant increase in back pressure.

It is this constriction in flow that results in pretty much all the really nasty symptoms of cirrhosis.

So, as with a bad traffic jam, the first thing that happens is the traffic builds up and the flow becomes slowed.

The second thing that happens is that some traffic gets forced off the main route, the portal vein in our case and ends up in other places! This may be the cell tissue and as things get worse the peritoneal cavity, giving us ascites and into the legs giving us edema.

The third thing that may happen is blood tries to force its way around the blockage, forming new routes. The new routes attempt to get their way back to the hepatic vein but in doing so, many will arrive at the esophagus and may result in major, possibly fatal blood bursts called varices.

The fourth thing that may happen is that the blood that gets forced around the liver does make it to the hepatic vein and in so doing passes merrily on, unfiltered, uncleaned, poisons still intact to wreak havoc on the brain to result in what becomes known as hepatic encephalopathy.

These three symptoms, the Trinity of Ascites, Varices and Hepatic Encephalopathy are the classic and unmistakeable signs of End Stage Liver Disease.

They are all caused by portal hypertension or excessive pressure in the portal vein.

Everyone who suffers cirrhosis will end up with at least one of these, sometimes more.

They all bring their own level of misery and danger.

All of them can result in death.