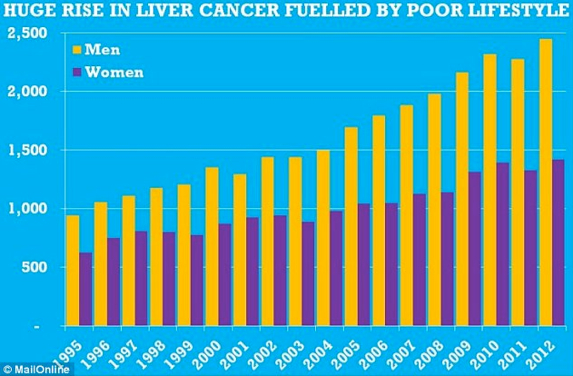 Cases of liver cancer have soared by up to 70 per cent in a decade, fuelled by poor diet, obesity and binge drinking.

It means it is now the 18th most common cancer in England, as people pay the price for eating and drinking too much. The ONS said: ‘Since 2003, there have been large increases in the number of registrations of liver, oral, uterine and kidney cancers, and malignant melanoma of the skin.

‘These cancers are strongly linked to lifestyle choices, such as smoking, alcohol consumption and obesity.’

The main risk factors for developing liver cancer are hepatitis B or C infection, accounting for well over 80 per cent of liver cancer cases worldwide. But alcohol consumption and diabetes are also risk factors. Andrew Langford, chief executive of the Liver Disease Trust, said the figures were worrying but not surprising as they formed part of a long-term trend.

He called for action to tackle drinking, obesity and the lack of awareness about hepatitis B.

‘People do associate liver disease with alcohol but then think its only alcoholics that may get liver disease.

‘It is more than dangerous heavy drinking that is causing the biggest burden of liver disease.’

He warned it was easy to ‘slip into that heavy-drinking lifestyle’.

‘People have only got to drink more than a third of the bottle of wine and they are drinking more than their daily allowance.

‘There is the new trend of particularly women who open a bottle of wine most nights and drink most of it.

‘We have got to start doing more about tackling these issues, not only about what people are eating but also exercise and trying to keep their BMI down.’

He also warned that because Britain does not routinely vaccinate for hepatitis B, unlike other countries, the problem is getting worse.

‘It is really Russian roulette. Some people will live with hepatitis B and it won’t affect them too much, and others it will inevitably end in liver failure and liver cancer.’

Breast cancer is the most common cancer in females, accounting for just under one-in-three newly diagnosed cases of cancer in 2012, the ONS said.

While age is the biggest factor, more than a quarter female breast cancer in the UK are linked to lifestyle and environmental factors, such as alcohol consumption, obesity, lack of physical activity, and hormonal and reproductive .