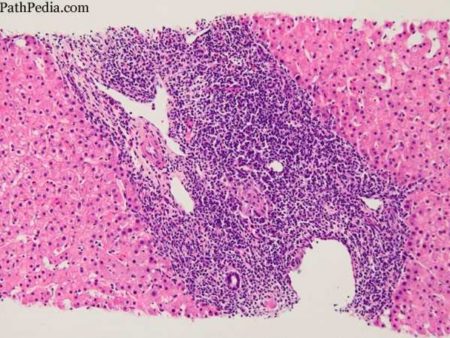 In the first of a new gastroenterology clinic series, Dr Amine Benmassaoud and Dr Emmanuel Tsochatzis discuss a case of unusual liver bloods

A 54 year old lady with hypothyroidism on levothyroxine, osteopenia on calcium and vitamin D, and dry eyes on artificial eye drops presents to her GP for a routine visit. One month ago, at a general check-up, she was noted to have an alkaline phosphatase (ALP) of 350IU/L (upper limit of normal [ULN] 130IU/L), an alanine aminotransferase (ALT) of 65IU/L (ULN 40IU/L), and a gamma-glutamyl transferase (GGT) of 200IU/L (ULN 70IU/L).

She otherwise feels well, but feels limited by fatigue and occasional pruritus, especially on her palms and soles.

On examination she appears well. Her weight is 70kg. There is no jaundice or stigmata of chronic liver disease. Abdomen is soft and non-tender with no appreciable organomegaly.

Her GP repeats a set of bloods including a full blood count, urea and electrolytes, liver enzymes, a thyroid profile and a liver database. Blood tests return as normal, except for persistently deranged liver enzymes with ALP at 372IU/L, and ALT at 59IU/L. Bilirubin and albumin are normal.

Deranged liver blood tests are identified regularly in general practice. The initial approach should be targeted at identifying the underlying cause and once this is identified, establishing the degree of liver disease severity is also important.

A medical history, including alcohol intake and drug history is the first step followed by differentiating between a cholestatic and hepatitic pattern of injury. In this case, the pattern appears cholestatic in nature.

Although an isolated rise in ALP might not be of liver origin as it is also expressed in other tissues such as bone, intestine and placenta, a coincidentally raised GGT would point toward a hepatic origin. An initial set of investigations is then tailored to the differential diagnosis and the patient’s condition1 (table 1).

Investigations return with a positive anti-mitochondrial antibody (AMA) at a titre of 1:1280, and a raised IgM at 5.0g/L (ULN 2.5g/L). ANA, and ASMA are negative, and IgG is normal. Abdominal ultrasound did not identify any biliary ductal dilatation whether intra- or extra-hepatic while the liver contour is smooth. Coagulation profile is normal, and there are no signs of portal hypertension (normal platelets, and spleen size on ultrasound).

A diagnosis of primary biliary cholangitis (PBC, formerly known as primary biliary cirrhosis) is therefore established, on the basis of a raised ALP, and a positive AMA, and a liver biopsy is not required. The raised IgM is supportive of the diagnosis, but not necessary.

PBC is a chronic autoimmune liver disease that effects women much more often men, with a nearly eight-fold difference, and presents in their sixth or seventh decade with a persistently raised ALP or GGT. Globally, an estimated one in 1,000 women over 40 years old live with PBC.

The estimated incidence in Europe is 1-2 per 100,000 population per year. Symptoms are often non-specific, but include fatigue, pruritus, Sicca syndrome and arthralgia. Coincidental conditions are usually autoimmune in nature and might include Sjogren’s syndrome, autoimmune Hashimoto’s thyroiditis and coeliac disease, but also osteoporosis, hypercholesterolemia and cholelithiasis.

The development of signs of hepatic failure, such as ascites and variceal bleeding, occur in 20% and 10.5% of patients respectively at 10 years. With jaundice, these are associated with poor short-term survival with mean time to death between two and three years.

PBC requires two out of the three following criteria to be diagnosed:

Given that AMA is positive in 95% of cases of PBC, in the context of chronically raised ALP, a liver biopsy is not necessary for the diagnosis in the majority of cases. In AMA-negative PBC, other PBC-specific antibodies should be requested, which are positive in 30% of cases. It also follows that a positive AMA alone is therefore not diagnostic, but can precede the occurrence of PBC by several years.

The role of liver biopsy is to confirm the diagnosis if cholestatic liver enzymes are noted in the absence of typical PBC-specific antibodies, and if there is suspicion of a coexisting liver disease, such as overlapping autoimmune hepatitis.3

Once the diagnosis is confirmed, staging the degree of fibrosis is important. Simple laboratory markers might indicate the presence of advanced liver disease such as an elevated bilirubin or a low platelet count. An abdominal ultrasound, which should be performed in all patients at baseline, might identify evidence of chronic liver disease such as a coarse liver outline, a heterogenous liver echotexture, and splenomegaly.

Non-invasive tools such as transient elastography are being used more frequently, but are often limited to specialised hepatology clinics. At the diagnosis of PBC, coeliac disease, Sjogren’s and thyroid diseases should be excluded. A bone densitometry should also be performed to exclude osteoporosis.

All patients with a diagnosis of PBC should be referred to secondary care for further management and investigations by a hepatologist. Management of PBC includes limiting disease progression and controlling symptoms. Current approved NICE first-line treatment is ursodeoxycholic acid (UDCA) at a weight-based daily dose of 13-15mg/kg which is continued indefinitely. Although very well-tolerated with minimal side effects, nearly 20% of patients may withdraw therapy (UDCA intolerant). Biochemical response to therapy should be assessed after 12 months in those tolerating UDCA using available criteria.

Patients who are non-responders or are intolerant to UDCA should be considered for second-line therapy with obeticholic acid, while benzafibrate might be approved for use based on results from a recent clinical trial.

Controlling symptoms such as fatigue and pruritus is also important, but it often does not correlate with disease activity. First-line therapy for pruritus remains cholestyramine. Other causes of fatigue should be investigated and treated accordingly.

If Sjogren’s is diagnosed in the context of Sicca symptoms and positive autoantibodies, referral to a specialist clinic should be considered while treatment of osteoporosis depends on the results of the bone density. Individuals with PBC therefore require lifelong monitoring of their disease, as they can progress to decompensated cirrhosis, with ascites, portal hypertension-related bleeding, hepatic encephalopathy and hepatocellular carcinoma.

Dr Emmanuel Tsochatzis is a senior clinical lecturer and honorary consultant in hepatology at the UCL Institute for Liver and Digestive Health, Royal Free Hospital.

Dr Amine Benmassaoud is a senior clinical fellow in hepatology at the UCL Institute for Liver and Digestive Health, Royal Free Hospital and is supported by an educational grant from the Canadian Association for the Study of Liver.