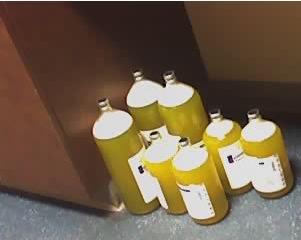 Of the Trinity of major symptoms of cirrhosis, ascites, varices and hepatic encephalopathy, ascites seems to be the most common.

It may be more common that the other two but that fact doesn’t make it any less nasty or any more treatable.

Ascites in simple terms is a build up of fluid in the abdominal cavity caused by ‘leakage’ of fluid from the veins. This leakage is the result of two main factors, one being portal hypertension – the increased pressure in the portal vein, the other being a low value of serum albumin in the blood plasma.

The leakage due to increased pressure in the veins is probably self-explanatory, the effect of low serum albumin, less so.

Albumin is a protein produced by the liver. It is quite amazing stuff! Albumin performs a number of key functions within the blood system.

It acts as a volumizer for the blood. Veins (and arteries) need to be porous to allow fluids and nutrition to pass from the blood supply into the cell tissue and from the cell tissue back into the veins. The soup of plasma and blood cells creates what is called an oncotic or osmotic pressure within the veins. The albumin thickens or volumizes the plasma to make it difficult for the plasma to leak through the capillary walls. In addition, because of its concentration of albumin in the veins it tends to draw fluid from the cells into the veins.

There is therefore a balance between the fluid leaking out and the fluid being drawn back in to the blood supply.

This system works well, normally. But here’s the problem when looking at cirrhosis. The liver, as one of its many functions produces albumin. With a compromised or damaged liver, this production of albumin gets affected. The liver becomes unable to manufacture sufficient albumin to keep the blood volumized.

The result of this is a less volumized blood is that it leaks more easily into the cells and also a lower osmotic pressure to draw fluid from the cells.

This imbalance, coupled with the increased portal hypertension results in ascites.

Ascites is just plain nasty! We all need to ingest fluid to live and that fluid ends up in the blood supply. Normally, excess fluid is expelled via the kidneys as urine. However, now that we have ascites, the fluid leaks out into the abdominal cavity before it ever gets to be processed by the kidneys.

In terms of babies, it equated to me carrying triplets, and like being pregnant, it all showed! Bloated was not the word for it. Wearing normal clothes became impossible and as the fluid builds up it can press on the stomach and even the lungs.

It gets worse! Unfortunately the fluid build up doesn’t just press upwards, fluid leakage can also take place in the lower extremities and this results in swollen legs and ankles. This condition is called edema.

Ascites can be uncomfortable to live with, extremely painful and potentially life threatening. The main risk of having this fluid sloshing about inside us is the risk of infection called spontaneous peritonitis. It is called spontaneous, because it happens for no apparent reason. If not treated immediately with antibiotics the infection can be fatal.

The treatment for ascites comprises oral diuretics, commonly Lasix and Spironolactone, a low salt diet (less that 1500mg per day) and a low fluid intake (less that 1.5L/day).

Excess fluid can be drawn off by undergoing a procedure called paracentecis whereby a needle is pushed into the abdomen and the fluid drawn off into vacuum bottles as shown in the picture above. The procedure shouldn’t hurt, but it is stressful and tiring.

Volumes of ascites vary from person to person. Some people may produce very little, others a lot. Some people may never need ‘draining’, others may need it regularly. At my worst I had three paracentecis procedures  in one week.

If diuretics fail to keep the volumes under control, usually due to worsening liver function then the ascites becomes known as refractory ascites. When or if this occurs other measures may have to be taken to deal with the problem.

The commonest solution is to undertake a TIPS procedure which will be discussed later.