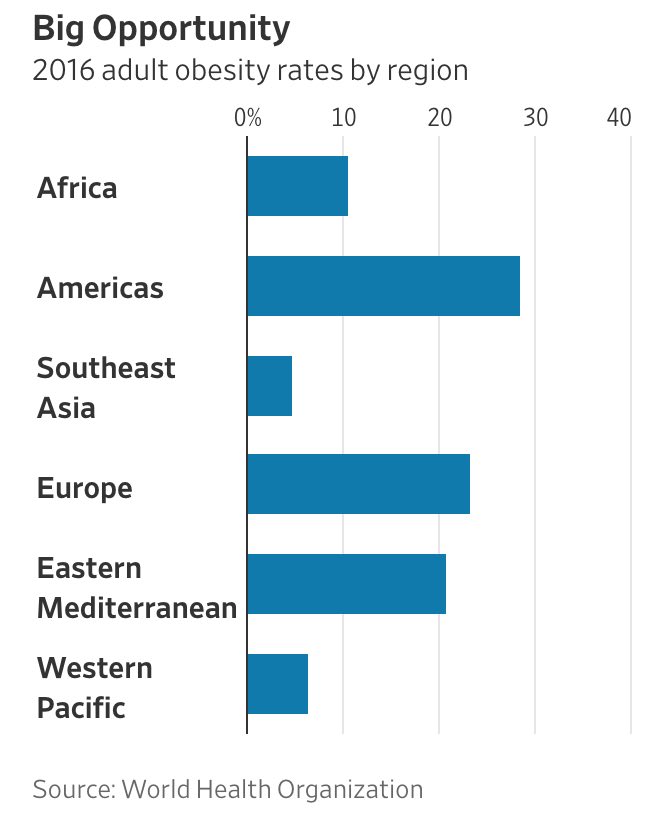 The next multibillion-dollar therapeutic area for drug companies may be fatty liver disease, but there are a few practical hurdles to overcome first.
 
The next big opportunity for pharmaceutical companies is in a disease many people don’t know about.

Investors and industry observers should expect to hear a lot about nonalcoholic steatohepatitis, or NASH, in the coming year. Treating this severe form of fatty liver disease is a massive business opportunity, but investors will need patience for promise to develop into profits.

Nearly a third of adults in the U.S. have fatty liver, while as many as 12% have NASH, according to Dr. Laurent Fischer, head of liver therapeutic development at Allergan . Many NASH patients don’t experience symptoms. The condition can be serious, though. Patients with NASH face inflammation and cell damage in the liver. Left untreated, NASH can lead to complications like cirrhosis, or liver scarring, which can be fatal. NASH is expected to be the primary cause of liver transplants by 2020.

Welcome to the 'pipeline'

The pipeline of potential patients is vast as obesity, closely associated with NASH, continues to be a major public health problem: A 2017 study from the National Institutes of Health found that nearly 40% of U.S. adults are obese—far more than a generation ago. Should that trend persist, there will be a deep pool of potential patients going forward.

The pharmaceutical industry has had big success treating liver ailments in the recent past. Cures for hepatitis C that hit the market in the early part of this decade generated many billions in sales—and left a profit hole that needs to be filled after sales started to fall.

No surprise, then, that NASH is attracting a crowd willing to spend heavily.

There are dozens of clinical trials under way. Several companies will reveal late-stage results in the coming year or early in 2020. That includes big companies like Allergan and Gilead Sciences , as well as smaller outfits like Intercept Pharmaceuticals . One estimate from pharmacy-benefits manager Optum put the potential peak market size as high as $40 billion in annual drug sales world-wide.

That seems ambitious. Merck & Co sells about $40 billion of medicine a year from hundreds of treatments. But the drug industry will benefit even if the NASH market ends up a fraction of that size.

Years of scientific progress mean there are fewer diseases without viable treatments. For example, statins to treat high cholesterol were giant commercial successes in the previous two decades, but now are available as cheap generic drugs. And while efforts by regulators to rein in drug costs haven’t resulted in any formal price controls, manufacturers have lately been less aggressive in raising prices than they were in the first half of the decade.

Overall, industry returns on research-and-development spending fell to 1.9% in 2018, according to Deloitte, down from more than 10% at the start of the decade. Developing the next mega-blockbuster would help reverse that trend. Since there are no approved treatments for NASH currently on the market, first-mover advantage in this potentially lucrative market remains up for grabs.

Investors will need to be patient, though, because there are significant hurdles to making NASH treatments a viable business. For starters, since no drug is yet approved, manufacturers will need to show regulators that treatment to reduce liver inflammation helps lead to improved health outcomes. They also will need to convince health insurers that such a treatment is worth paying for.

That isn’t all. NASH can be tricky to diagnose because most patients don’t have symptoms in the earlier stages of the disease. What is more, doctors currently must perform a liver biopsy to give a diagnosis. That means that identifying patients isn’t currently possible from a typical physical exam.

“Everybody is getting into the swimming pool, but no one has built the diving board,” says Allergan CEO Brent Saunders.

 Less invasive methods of diagnosing the disease are in development, and succeeding there will be just as important as developing an effective medicine. Such efforts could be several years away from bearing fruit, however.

Another hurdle is the significant overlap in the NASH patient base with other metabolic health issues, such as diabetes. A NASH patient is likely to have health issues that a physician might deem a higher priority to treat. On the other hand, since liver tissue can regenerate, unlike the heart, treating NASH may be an easier sell.

The path to profiting from the therapy may be tough but probably is worth the wait.