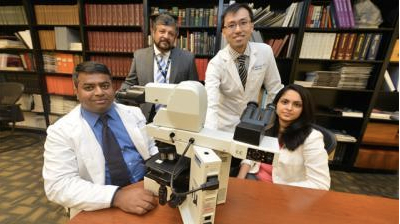 They have developed a test that will help pathologists clearly distinguish early liver cancer cells from nearly identical normal liver cells by giving them a distinctive red-brown hue.

The inability to definitively tell the difference often means the disease is detected late when treatment options are less effective, said Dr. Ravindra Kolhe, pathologist and Medical Director of the Georgia Esoteric, Molecular Labs, LLC, at the Medical College of Georgia at Georgia Regents University.

“There is no definitive test for early diagnosis of liver cancer,” said Kolhe, lead author of the study being presented at the American Society of Clinical Pathology 2013 Annual Meeting in Chicago, Sept. 18-21. “Our test adds a level of comfort for making the diagnosis.“

“The deadly liver cancer cells seek to recapitulate the appearance of normal liver cells,” said Dr. Amyn M. Rojiani, Chairman of MCG’s Department of Pathology. And they are very good at that, the pathologists agree, which is the frustration they have when trying to give patients definitive answers from looking at the tiny core biopsies of their liver under the microscope.

“As pathologists, we often find ourselves wanting to know more,” said Dr. Andy Rahardja, a pathology resident who worked on the project. “Our test helps us differentiate between the two.”

Unfortunately early liver cancer also is mostly silent. By the time it’s large enough to cause classic symptoms such as abdominal pain and weight loss, the cancer cells look distinctive but the liver is failing. The myriad of treatment options – from removing the diseased portion of the liver to liver transplants to freezing or heating cancer cells – have a high chance of failing as well, Kolhe said.

“You want to make the correct diagnosis as early in the game as you can,” Kolhe said. He began collaborating with BioGenex laboratories, a California company with expertise in cell and tissue testing, to develop a probe that gives cancer cells the distinctive red-brown hue. The probe detects and stains a microRNA called mir-21, which is found in liver cancer but not healthy liver cells, Kolhe said.

Unlike RNA, microRNA doesn’t make proteins rather helps control proteins that are expressed by RNA. That means it’s more stable and can survive harsh chemicals normally used to prepare the biopsy for microscopic evaluation. This includes using formaldehyde and replacing natural fluids with paraffin so the tissue can be easily cut and stained with different reagents to help pathologists try to pinpoint a patient’s problem.

For the study, they used their probe on biopsies of 10 healthy livers and 10 livers with early cancers. In every case of liver cancer, the biopsy took on the red-brown hue. The probe was not detected in normal cells. The studies were done retrospectively, so they already knew which patients ultimately were diagnosed with cancer. They are now using the test on 200 similar cases of liver cancer.

The group also is exploring this approach in other hard-to-detect-early cancers. Kolhe worked with pathology resident Dr. Puneeta Vasa to identify microRNAs selectively expressed in melanoma. Under the microscope, the potentially deadly skin cancer cells look a lot like common mole cells. These findings also will be presented at the American Society of Clinical Pathology meeting and the researchers are working with BioGenex to develop probes to make melanoma-relevant microRNA stand out as well.

In the case of diagnosing early liver cancer, the physicians note that cirrhosis, a massive scarring of the liver resulting from chronic infection with hepatitis B and C viruses, further muddies the current diagnostic waters by essentially giving cancer cells cover. These common viruses are the most common cause of liver cancer worldwide, according to the American Cancer Society. Alcohol abuse, a leading cause of cirrhosis in the United States, also is a risk factor for liver cancer. The new probe fortunately does not interact with cirrhosed cells, Kolhe said.

Posted in In The News and tagged cancer, carcinoma, hcc
← One out of 10 American children have livers like alcoholicsThe last thing Ireland needs is another excuse to drink →