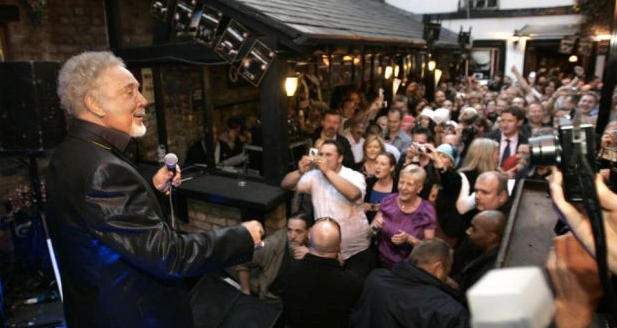 The last thing Ireland needs is another excuse to drink Tom Jones singing to a crowd in the Brazen Head pub on Arthur’s Day 2009 – “a clever way to enhance the Guinness brand”. Photograph: Dara Mac Dónaill

Do we need a real hero other than Arthur for Ireland? This week there will be much talk about raising a glass in celebration of “Arthur’s Day”. For anyone unaware of the most recent addition to the Irish holiday calendar, this is the day when the country pays homage to the most “eminent” of Irish heroes: the man who created Guinness.

Back in 2009 some bright marketing individuals in Diageo , feeling Guinness was embedded insufficiently well in the Irish psyche, especially among younger drinkers, developed a clever way to enhance the brand.

The answer was an event ostensibly promoting Irish musical talent by bringing popular music acts to pubs across the country. The tagline on the Guinness website reads “showcasing Ireland’s talent and creativity”, but in fact previous years’ headliners have largely comprised non-Irish bands and fewer than half of this year’s headline artists are Irish. The contradictions in Arthur’s Day have not escaped some seasoned artists: Christy Moore and the Waterboys’ singer Mike Scott have released songs critical of Diageo’s promotional initiative.

With high rates of alcohol consumption and binge drinking, the last thing Ireland needed was another excuse to drink. We have long had an extremely permissive attitude to excess alcohol consumption and drunkenness. With alcohol ever more affordable in recent years, the effects of this relationship are seen in the A&E departments and liver units of our hospitals. One in four A&E department attendances is alcohol-related.

There is a tendency to forget that alcohol is a drug, a psychoactive substance that is harmful in many ways. It is a contributing factor in many suicides, causes twice as many deaths as all other drugs combined and is a factor in multiple family and social harms.

Despite this, alcohol is sold almost like any other grocery product. Alcohol ads feature on television, radio, billboards and online.

Alcohol is associated with our sports teams and national games. All of this marketing has been shown to encourage consumption, especially among younger people. And with cheap alcohol readily available it is easier than ever to consume this dangerous drug to excess.

Minimum unit pricing
As doctors we have been talking about cheap alcohol for some time. Research has shown that younger drinkers and harmful drinkers are more likely to buy cheap alcohol. It is for this reason that doctors advocate the introduction of minimum unit pricing (Mup). There should be no argument against this measure, as where Mup has been introduced a rapid reduction of up to 32 per cent was observed in alcohol-related deaths.

Likewise, the issue of alcohol sponsorship in sport should be a no-brainer. We should not continue to associate sporting activity with alcohol, and ways must be found to phase out this sponsorship.

Kerry vintners recently stepped forward and said there was a substantial problem with abusive underage binge drinking in Ireland.

These vintners announced a scheme to boost their business by encouraging parents to bring their (over-18) children to the pub. I’m not convinced this type of campaign will tackle the issue but I recognise parents have a strong role to play when it comes to alcohol and their children. However, as parents and as individuals we struggle against the power of the alcohol marketing machine and the reluctance of legislators to limit its influence.

The Royal College of Physicians of Ireland is holding its own alcohol-focused event today: a public meeting to inform and educate on alcohol harm. It may not generate as much discussion or media coverage as Diageo’s celebration but it will provide food for thought both for those who enjoy Arthur’s Day and for the growing number who share the sentiments of Christy Moore.