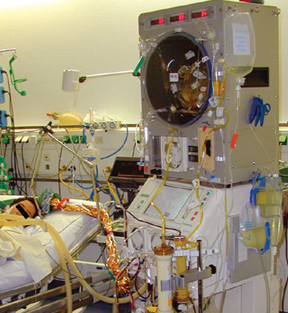 What is Liver Dialysis?

Liver dialysis is a detoxification treatment for liver failure and has shown promise for patients with hepatorenal syndrome. It is similar to hemodialysis and based on the same principles. Like a bioartificial liver device, it is a form of artificial extracorporeal liver support.

A critical issue of the clinical syndrome in liver failure is the accumulation of toxins not cleared by the failing liver. Based on this hypothesis, the removal of lipophilic, albumin-bound substances such as bilirubin, bile acids, metabolites of aromatic amino acids, medium-chain fatty acids and cytokines should be beneficial to the clinical course of a patient in liver failure. This led to the development of artificial filtration and adsorption devices.

Hemodialysis is used for renal failure and primarily removes water soluble toxins, however it does not remove toxins bound to albumin that accumulate in liver failure.

Whilst the technique is in its infancy, the prognosis of patients with liver failure remains guarded. Liver dialysis, currently, is only considered to be a bridge to transplantation or liver regeneration (in the case of acute liver failure)123 and, unlike kidney dialysis (for renal failure), cannot support a patient for an extended period of time (months to years).

The Molecular Adsorbents Recirculation System (MARS), developed by Teraklin AG of Germany, is the best known extracorporal liver dialysis system and has existed for approximately ten years. It consists of two separate dialysis circuits. The first circuit consists of human serum albumin, is in contact with the patient’s blood through a semipermeable membrane and has two special filters to clean the albumin after it has absorbed toxins from the patient’s blood.

The second circuit consists of a hemodialysis machine and is used to clean the albumin in the first circuit, before it is recirculated to the semipermeable membrane in contact with the patient’s blood. The MARS system can remove a number of toxins, including ammonia, bile acids, bilirubin, copper, iron and phenols.

MARS development started at the University of Rostock in Germany. It has 510 (k) approval from the Food and Drug Administration (FDA) for drug overdoses and poisoning as of June 2005 and is available in the USA since the end of 2005.1 Canada’s first MARS unit arrived at the Toronto General Hospital in 2005.

Single pass albumin dialysis (SPAD) is a simple method of albumin dialysis using standard renal replacement therapy machines without an additional perfusion pump system: The patient’s blood flows through a circuit with a high-flux hollow fiber hemodiafilter, identical to that used in the MARS system.

The other side of this membrane is cleansed with an albumin solution in counter-directional flow, which is discarded after passing the filter. Hemodialysis can be performed in the first circuit via the same high-flux hollow fibers.

SPAD, MARS and continuous veno-venous haemodiafiltration (CVVHDF) were compared in vitro with regard to detoxification capacity. SPAD and CVVHDF showed a significantly greater reduction of ammonia compared with MARS. No significant differences could be observed between SPAD, MARS and CVVHDF concerning other water-soluble substances.

Concerning the reduction of bile acids no significant differences between SPAD and MARS were seen. It was concluded that the detoxification capacity of SPAD is similar or even higher when compared with the more sophisticated, more complex and hence more expensive MARS.

As albumin dialysis is a costly procedure, financial aspects are important: For a seven-hour treatment with MARS, approximately € 300 for 600 ml human serum albumin solution (20%), € 1740 for a MARS treatment kit and € 125 for disposables used by the dialysis machine have to be spent.

The cost of this therapy adds up to approximately € 2165. Performing SPAD according to the protocol by Sauer et al., however, requires 1000 ml of human albumin solution (20%) at a cost of € 500. A high-flux dialyzer costing approximately € 40 and the tubings (€ 125) must also be purchased.

The overall costs of a SPAD treatment is approximately € 656 – 30% of the costs of an equally efficient MARS therapy session. The expenditure for the MARS monitor necessary to operate the MARS disposables is not included in this calculation.

The Prometheus system (Fresenius Medical Care, Bad Homburg, Germany) is a new device based on the combination of albumin adsorption with high-flux hemodialysis after selective filtration of the albumin fraction through a specific polysulfon filter (AlbuFlow). It has been studied in a group of eleven patients with hepatorenal syndrome (acute-on-chronic liver failure and accompanying renal failure).

Gambro – the manufacturer of the MARS.

MARS-Leberdialyse – has a picture of the MARS in action.

The Prometheus System – Product description with pictures of the system

Posted in What Is? and tagged liver dialysis
← What is Jaundice?What is NASH and NAFL? →