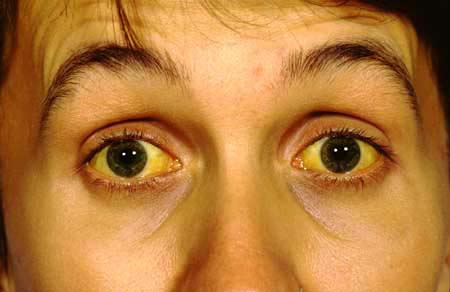 Jaundice is not a disease but rather a sign that can occur in many different diseases. Jaundice is the yellowish staining of the skin and sclerae (the whites of the eyes) that is caused by high levels in blood of the chemical bilirubin. The color of the skin and sclerae vary depending on the level of bilirubin. When the bilirubin level is mildly elevated, they are yellowish. When the bilirubin level is high, they tend to be brown.

Jaundice occurs when there is

1) too much bilirubin being produced for the liver to remove from the blood. (For example, patients with hemolytic anemia have an abnormally rapid rate of destruction of their red blood cells that releases large amounts of bilirubin into the blood),

2) a defect in the liver that prevents bilirubin from being removed from the blood, converted to bilirubin/glucuronic acid (conjugated) or secreted in bile, or

3) blockage of the bile ducts that decreases the flow of bile and bilirubin from the liver into the intestines.

What problems does jaundice cause?

Jaundice or cholestasis, by themselves, causes few problems (except in the newborn, and jaundice in the newborn is different than most other types of jaundice, as discussed later.) Jaundice can turn the skin and sclerae yellow. In addition, stool can become light in color, even clay-colored because of the absence of bilirubin that normally gives stool its brown color.

The urine may turn dark or brownish in color. This occurs when the bilirubin that is building up in the blood begins to be excreted from the body in the urine. Just as in feces, the bilirubin turns the urine brown.

Besides the cosmetic issues of looking yellow and having dark urine and light stools, the symptom that is associated most frequently associated with jaundice or cholestasis is itching, medically known as pruritus.

The itching associated with jaundice and cholestasis can sometimes be so severe that it causes patients to scratch their skin “raw,” have trouble sleeping, and, rarely, even to commit suicide.

It is the disease causing the jaundice that causes most problems associated with jaundice. Specifically, if the jaundice is due to liver disease, the patient may have symptoms or signs of liver disease or cirrhosis. (Cirrhosis represents advanced liver disease.)

The symptoms and signs of liver disease and cirrhosis include fatigue, swelling of the ankles, muscle wasting, ascites (fluid accumulation in the abdominal cavity), mental confusion or coma, and bleeding into the intestines.

If the jaundice is caused by blockage of the bile ducts, no bile enters the intestine. Bile is necessary for digesting fat in the intestine and releasing vitamins from within it so that the vitamins can be absorbed into the body. Therefore, blockage of the flow of bile can lead to deficiencies of certain vitamins.

For example, there may be a deficiency of vitamin K that prevents proteins that are needed for normal clotting of blood to be made by the liver, and, as a result, uncontrolled bleeding may occur.

What diseases cause jaundice?

There are several uncommon conditions that give rise to over-production of bilirubin. The bilirubin in the blood in these conditions usually is only mildly elevated, and the resultant jaundice usually is mild and difficult to detect. These conditions include:

1) rapid destruction of red blood cells (referred to as hemolysis),

2) a defect in the formation of red blood cells that leads to the over-production of hemoglobin in the bone marrow (called ineffective erythropoiesis), or

3) absorption of large amounts of hemoglobin when there has been much bleeding into tissues (e.g., from hematomas, collections of blood in the tissues).

Acute inflammation of the liver

Any condition in which the liver becomes inflamed can reduce the ability of the liver to conjugate (attach glucuronic acid to) and secrete bilirubin. Common examples include acute viral hepatitis, alcoholic hepatitis, and Tylenol-induced liver toxicity.

Chronic inflammation of the liver can lead to scarring and cirrhosis, and can ultimately result in jaundice. Common examples include chronic hepatitis B and C, alcoholic liver disease with cirrhosis, and autoimmune hepatitis.

Infiltrative diseases of the liver

Infiltrative diseases of the liver refer to diseases in which the liver is filled with cells or substances that don’t belong there. The most common example would be metastatic cancer to the liver, usually from cancers within the abdomen. Uncommon causes include a few diseases in which substances accumulate within the liver cells, for example, iron (hemochromatosis), alpha-one antitrypsin (alpha-one antitrypsin deficiency), and copper (Wilson’s disease).

Inflammation of the bile ducts

Diseases causing inflammation of the bile ducts, for example, primary biliary cirrhosis or sclerosing cholangitis and some drugs, can stop the flow of bile and elimination of bilirubin and lead to jaundice.

Blockage of the bile ducts

Many drugs can cause jaundice and/or cholestasis. Some drugs can cause liver inflammation (hepatitis) similar to viral hepatitis. Other drugs can cause inflammation of the bile ducts, resulting in cholestasis and/or jaundice. Drugs also may interfere directly with the chemical processes within the cells of the liver and bile ducts that are responsible for the formation and secretion of bile to the intestine. As a result, the constituents of bile, including bilirubin, are retained in the body.

The best example of a drug that causes this latter type of cholestasis and jaundice is estrogen. The primary treatment for jaundice caused by drugs is discontinuation of the drug. Almost always the bilirubin levels will return to normal within a few weeks, though in a few cases it may take several months.

There are several rare genetic disorders present from birth that give rise to jaundice. Crigler-Najjar syndrome is caused by a defect in the conjugation of bilirubin in the liver due to a reduction or absence of the enzyme responsible for conjugating the glucuronic acid to bilirubin. Dubin-Johnson and Rotor’s syndromes are caused by abnormal secretion of bilirubin into bile.

There are rare instances in which the bile ducts do not develop normally and the flow of bile is interrupted. Jaundice frequently occurs. These diseases usually are present from birth though some of them may first be recognized in childhood or even adulthood. Cysts of the bile duct (choledochal cysts) are an example of such a developmental abnormality. Another example is Caroli’s disease.

Most of the diseases discussed previously can affect women during pregnancy, but there are some additional causes of jaundice that are unique to pregnancy.

Pre-eclampsia. Pre-eclampsia, previously called toxemia of pregnancy, is a disease that occurs during the second half of pregnancy and involves several systems within the body, including the liver. It may result in high blood pressure, fluid retention, and damage to the kidneys as well as anemia and reduced numbers of platelets due to destruction of red blood cells and platelets.

It often causes problems for the fetus. Although the bilirubin level in the blood is elevated in pre-eclampsia, it usually is mildly elevated, and jaundice is uncommon. Treatment of pre-eclampsia usually involves delivery of the fetus as soon as possible if the fetus is mature.

There is an increased risk of infant death. Jaundice is common, but not always present in AFLP.

Treatment usually involves delivery of the fetus as soon as possible.

How is the cause of jaundice diagnosed?

Many tests are available for determining the cause of jaundice, but the history and physical examination are important as well.

The history can suggest possible reasons for the jaundice. For example, heavy use of alcohol suggests alcoholic liver disease, whereas use of illegal, injectable drugs suggests viral hepatitis. Recent initiation of a new drug suggests drug-induced jaundice. Episodes of abdominal pain associated with jaundice suggests blockage of the bile ducts usually by gallstones.

The most important part of the physical examination in a patient who is jaundiced is examination of the abdomen. Masses (tumors) in the abdomen suggest cancer infiltrating the liver (metastatic cancer) as the cause of the jaundice. An enlarged, firm liver suggests cirrhosis. A rock-hard, nodular liver suggests cancer within the liver.

Ultrasonography is a simple, safe, and readily-available test that uses sound waves to examine the organs within the abdomen. Ultrasound examination of the abdomen may disclose gallstones, tumors in the liver or the pancreas, and dilated bile ducts due to obstruction (by gallstones or tumor).

Computerized tomography or CT scans are scans that use x-rays to examine the soft tissues of the abdomen. They are particularly good for identifying tumors in the liver and the pancreas and dilated bile ducts, though they are not as good as ultrasonography for identifying gallstones.

Magnetic Resonance Imaging scans are scans that utilize magnetization of the body to examine the soft tissues of the abdomen. Like CT scans, they are good for identifying tumors and studying bile ducts. MRI scans can be modified to visualize the bile ducts better than CT scans (a procedure referred to as MR cholangiography), and, therefore, are better than CT for identifying the cause and location of bile duct obstruction.

Endoscopic retrograde cholangiopancreatography (ERCP) provides the best means for examining the bile duct. For ERCP an endoscope is swallowed by the patient after he or she has been sedated. The endoscope is a flexible, fiberoptic tube approximately four feet in length with a light and camera on its tip.

The tip of the endoscope is passed down the esophagus, through the stomach, and into the duodenum where the main bile duct enters the intestine. A thin tube then is passed through the endoscope and into the bile duct, and the duct is filled with x-ray contrast solution. An x-ray is taken that clearly demonstrates the contrast-filled bile ducts. ERCP is particularly good at demonstrating the cause and location of obstruction within the bile ducts.

A major advantage of ERCP is that diagnostic and therapeutic procedures can be done at the same time as the x-rays. For example, if gallstones are found in the bile ducts, they can be removed. Stents can be placed in the bile ducts to relieve the obstruction caused by scarring or tumors. Biopsies of tumors can be obtained.

Ultrasonography can be combined with ERCP by using a specialized endoscope capable of doing ultrasound scanning. Endoscopic ultrasound is excellent for diagnosing small gallstones in the gallbladder and bile ducts that can be missed by other diagnostic methods such as ultrasound, CT, and MRI. It also is the best means of examining the pancreas for tumors and can facilitate biopsy through the endoscope of tumors within the pancreas.

Biopsy of the liver provides a small piece of tissue from the liver for examination under the microscope. The biopsy most commonly is done with a long needle after local injection of the skin of the abdomen overlying the liver with anesthetic. The needle passes through the skin and into the liver, cutting off a small piece of liver tissue.

When the needle is withdrawn, the piece of liver comes with it. Liver biopsy is particularly good for diagnosing inflammation of the liver and bile ducts, cirrhosis, cancer, and fatty liver.

How is jaundice treated?

Posted in What Is? and tagged bilirubin, jaundice
← What is INR?What is Liver Dialysis? →