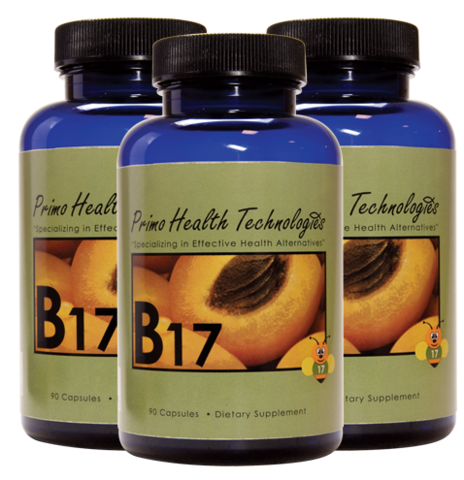 The diet of primitive man and most fruit-eating animals was very rich in nitrilosides. They regularly ate the seeds (and kernels) of all fruits, since these seeds are rich in protein, polyunsaturated fats, and other nutrients.

Seeds also contain as much as 2 per cent or more nitriloside. There are scores of other major foods naturally, or normally, very rich in nitriloside.

Vitamin B-17 (nitriloside, amygdaline) is a designation proposed to include a large group of water-soluble, essentially non-toxic, sugary, compounds found in over 800 plants, many of which are edible. These factors are collectively known as Beta-cyanophoric glycosides. They comprise molecules made of sugar, hydrogen cyanide, a benzene ring or an acetone. Though the intact molecule is for all practical purposes completely non-toxic, it may be hydrolyzed by Beta-glycosidase to a sugar, free hydrogen cyanide, benzaldehyde or acetone.

Apricot Kernels are the richest source of B17 (Laetrile). Ernst Krebs is the world’s leading authority on the relationship between cancer and nitrilosides, and the inventor of laetrile.

Apricot kernels are known to prevent and cure cancer, even though the medical establishment has worked night and day and even lied to suppress it. Vitamin B17 is found in most all fruit seeds such as the apple, peach, cherry, orange, nectarine and apricot. It is found in some beans and many grasses such as wheat grass.

The hard wooden pit in the middle of the peach is not supposed to be thrown away. In fact, the wooden shell is strong armor protecting one of the most important foods known to man, the seed.

It is one of the main courses of food in cultures such as the Navajo Indians, the Hunzas the Abkhasians and many more. Did you know that within these tribes there has never been a reported case of cancer? (And there are doctors and scientists from the U.S. living within these tribes right now studying this phenomena)

We don’t need to make the seed a main course but we do need the equivalent of about seven apricots seeds per day to improve our odd for a cancer-free life. Other foods that contain vitamin B-17 are: bitter almonds, millet, wheat grass, lima beans and more. (The bitter almond tree was banned from the U.S. in 1995.) The kernel or seed contains the highest amounts of vitamin B17.

One of the most common nitrilosides is amygdalin. This nitriloside occurs in the kernels of seeds of practically all fruits. The seeds of apples, apricots, cherries, peaches, plums, nectarines, and the like carry this factor; often in the extraordinary concentration of 2 to 3 per cent.

The rule of thumb when eating seeds is to eat the fruit along with the seeds. For example, you do not want to extract the seeds from 50 apples and eat only those seeds, however eating a few apples every day along with their seeds is perfectly safe.

Since the seeds of fruits are possibly edible, it may be proper to designate the non-toxic water soluble accessory food factor or nitriloside that they contain as vitamin B-17.

The presence of nitriloside in the diet produces specific physiologic effects and leaves as metabolites specific chemical compounds of a physiologically active nature.

The production by a non-toxic, water-soluble accessory food factor of specific physiological effects as well as identifiable metabolites suggests the vitamin nature of the compound.

Before considering the possible antineoplastic activity of this vitamin B-17, let us recall that the benzoic acid arising from it has certain antirheumatic and antiseptic properties.

It was rather widely used (in Germany and elsewhere) for rheumatic disease therapy prior to the advent of the ortho-hydroxy addition product of benzoic acid known as ortho-hydroxybenzoic acid or salicylic acid. It was originally obtained from beech-wood bark.

Recall now, that thiocyanate also was once widely used, in both Germany and American medicine, as an effective agent for hypertension. Used as such, as the simple chemical, the dosage was difficult to control. Obviously, this difficulty does not arise from the thiocyanate usually produced in the body through metabolizing vitamin B-17 (nitriloside).

However, chronic hypotension has been reported in Nigerians who eat quantities of the nitriloside-containing manioc (cassava)especially that of the bitter variety.

Are we justified in suggesting that cancer itself might be another chronic metabolic disease that arises from a specific vitamin deficiencya deficiency specifically in vitamin B-17 (nitriloside)?

We are speaking of metabolic or non-transmissible diseases. At one time the metabolic disease known as scurvy killed hundreds of thousands of people, sometimes entire populations. This disease found total prevention and cure in the ascorbic acid or vitamin C component of fruits and vegetables.

Similarly, the once fatal diseases so aptly called pernicious anemia, pellagra, beri beri, countless neuropathies, and the like, found complete cure and prevention in specific dietary factors, that is, essential nutrients in an adequate diet.

No chronic or metabolic disease has ever found cure or prevention, that is, real cure and real prevention–except through factors essential to an adequate diet and/or normal to animal economy.

Does it seem likely, therefore, that cancer will be the first exception to this generalization that to date has not had a single known exception? In my humble opinion, certainly not. But does it follow from this that vitamin B-17 (nitriloside) is the specific antineoplastic vitamin?

Logically, by itself, alone, this conclusion that nitriloside is the specific antineoplastic vitamin does not follow. However, examine the brilliant laboratory studies of Dr. Dean Burk of the Department of Cytochemistry of the National Cancer Institute in Washington. I believe that in light of the experimental evidence that he has produced, you might agree that vitamin B-17 (nitriloside) is indeed the antineoplastic vitamin and is certainly worth more investigation.

Posted in Vits, Mins and Supps and tagged b-17, cancer, vitamins b17
← Vitamin B halts memory loss in breakthrough British trialVitamin B12 During Hepatitis C Treatment →