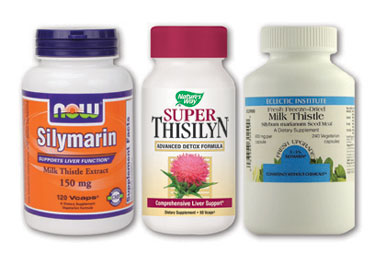 Once again, Milk Thistle fails to show any benefit. Although this article is reporting results on Hep C, it clearly states “the goal was really to see whether it (silymarin) could improve liver function”.

The answer was an unambiguous ‘No.’

SAN FRANCISCO – Oral silymarin, an extract of milk thistle, is well tolerated but not efficacious for treating chronic hepatitis C virus infection, according to results from a randomized phase II trial reported at the annual meeting of the American Association for the Study of Liver Diseases.

After 24 weeks, patients taking high doses of the botanical agent – which is known to have anti-inflammatory, immunomodulatory, and antiviral activity in vitro – did not show improvement in serum levels of alanine aminotransferase (ALT) compared with their counterparts taking placebo.

A botanical agent – and milk thistle extract – has been proven ineffective for treating chronic hepatitis C.

There were also no significant differences between groups in a variety of measures of symptoms and quality of life.

“We must conclude that oral silymarin used at higher-than-customary doses did not significantly alter biochemical or virological markers of disease activity in hepatitis C patients previously treated with interferon-based regimens,” said first author Dr. Michael W. Fried, director of hepatology at the University of North Carolina at Chapel Hill. But he added that “this was a fairly difficult group – these were nonresponders to conventional therapy – they were older.”

The study is noteworthy for its many strengths, such as its use of a well characterized silymarin product, prolonged treatment, excellent adherence, and focus on a specific liver disease, he said.

Recent studies finding a benefit of silymarin in treating HCV infection used a different, intravenous formulation, according to Dr. Fried. That formulation contains a succinate moiety that may be important and likely achieves blood levels of silybin A, a major active component, higher than can be achieved with the oral formulation.

The oral doses used in the trial were probably not sufficient to inhibit the virus’ replicative enzymes, but giving higher doses was not practical. “We had to balance that with the pill burden: These were five capsules given three times a day, so we were not able to push the dose currently,” he explained. “There may be attempts to try higher-dose formulations. There is also some way, interestingly, that’s being investigated to try to boost the silymarin levels with other botanical products … because of their interactions on metabolism.”

Dr. T. Jake Liang, president of the AASLD and chief of the liver diseases branch at the National Institute of Diabetes and Digestive and Kidney Diseases in Bethesda, Md., noted that the market for herbal and related products “is a big business in this country, about $30 billion, and it’s really not that well regulated, and there are a lot of unsubstantiated claims.”

He pointed out that the trial focused on a more modest disease outcome. “The goal was not so much to see whether silymarin can eradicate the hepatitis C virus; the goal was really to see whether it could improve the damage to the liver,” he explained in a press conference.

“I think this study clearly shows that the use of milk thistle is not effective in treating patients with hepatitis C. It’s a very important negative study – I think that’s key. We really want to make sure that we prevent any unwarranted use of herbal products despite the health claims,” Dr. Liang concluded.

The trial, known as SyNCH and funded by the National Institutes of Health, enrolled 154 adult patients from four U.S. centers with chronic HCV who had not had a sustained virologic response to prior interferon-based therapy, had quantifiable HCV RNA, and had an ALT level of at least 65 IU/L.

Patients who had decompensated cirrhosis or moderate to severe steatosis or steatohepatitis were excluded, as were those who were positive for HIV or hepatitis B surface antigen, or who had used silymarin in the past month.

The patients were assigned to double-blind treatment in three groups: silymarin 420 mg three times daily, silymarin 700 mg three times daily, or matching placebo three times daily. The silymarin product used was a standardized preparation (Legalon, manufactured and supplied by Rottapharm Madaus in Monza, Italy, and Cologne, Germany) that is approved as a prescription drug in some European and Asian countries. Doses three- to fivefold higher than the customary one were chosen to achieve the highest likelihood of finding a benefit, according to Dr. Fried.

The patients studied were about 55 years old, on average, and three-fourths were white. Their mean ALT was 125 IU/L. Forty-four percent had used silymarin previously.

“Adherence throughout the treatment trial was quite excellent,” he reported; across groups, 92%-98% of participants took more than 80% of planned doses. And random testing confirmed that patients in the silymarin group had silybin A in plasma while those in the placebo group did not.

However, final intent-to-treat analyses showed no significant difference between groups at 24 weeks in the primary end point, defined as achievement of a serum ALT level of 45 IU/L or lower (approximately the upper limit of normal) or a drop in serum ALT level of at least 50% to less than 65 IU/L (approximately 1.5 times the upper limit of normal).

“We really looked at many different subpopulations, and we could not find any signal at all,” Dr. Fried said; additionally, the findings were much the same in per-protocol analyses.

“Silymarin was well tolerated with an adverse event profile similar to placebo,” Dr. Fried said. The three treatment groups did not differ significantly with respect to rates of adverse events (most of which were mild or moderate) or serious adverse events.

Dr. Fried reported that he is a consultant to Genentech, Tibotec, Vertex, Merck, Abbott, and Pharmasset; receives grant or research support from Genentech, Tibotec, Vertex, Merck, Anadys, Abbott, and Bristol-Myers Squibb; is an adviser or reviewer for GlaxoSmithKline; and has stock in Pharmasset. Dr. Liang reported that he had no relevant conflicts of interest.