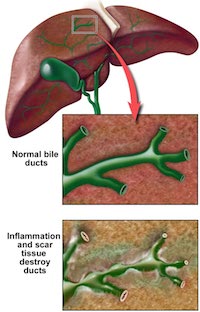 From Wikipedia, the free encyclopedia

Primary sclerosing cholangitis (PSC) is a chronic liver disease caused by progressive inflammation and scarring of the bile ducts of the liver. The inflammation impedes the flow of bile to the gut, which can ultimately lead to liver cirrhosis and liver failure. The underlying cause of the inflammation is believed to be autoimmunity.

The definitive treatment is liver transplantation.

Malabsorption (especially of fat) and steatorrhea, leading to decreased levels of the fat-soluble vitamins, A, D, E and K.

Ascending cholangitis, or infection of the bile duct.

Pale stools due to biliary obstruction

Dark urine due to excess conjugated bilirubin, which is water soluble, being excreted by the kidneys

The diagnosis is by imaging of the bile duct, usually in the setting of endoscopic retrograde cholangiopancreatography (ERCPoscopy of the bile duct and pancreas), which shows “beading” (both strictures and dilation) of the intrahepatic and extrahepatic bile ducts. Another option is magnetic resonance cholangiopancreatography (MRCP), where magnetic resonance imaging is used to visualise the biliary tract.

Most patients with PSC have evidence of autoantibodies. Approximately 80% of patients have perinuclear antineutrophil cytoplasmic antibodies, also called p-ANCA, however this finding is not specific for PSC. Antinuclear antibodies and anti-smooth muscle antibodys are found in 20%-50% of PSC patients and, likewise, are not specific for the disease.

The cause(s) for PSC are unknown. It is often considered to be an autoimmune disorder. PSC is associated with inflammatory bowel disease and particularly ulcerative colitis, which coexists in approximately 70% of patients. Conversely, the prevalence of PSC in ulcerative colitis patients is ~4%. There is a 2:1 male-to-female predilection of PSC.

There is an increased prevalence of HLA alleles A1, B8, and DR3 in PSC.

Inflammation damages bile ducts both inside and outside of the liver. The resulting scarring of the bile ducts blocks the flow of bile, causing cholestasis. Bile stasis and back-pressure induces proliferation of epithelial cells and focal destruction of the liver parenchyma, forming bile lakes. Chronic biliary obstruction causes portal tract fibrosis and ultimately biliary cirrhosis and liver failure.

Bile assists in the enteric breakdown and absorption of fat; the absence of bile leads to fat malabsorption and deficiencies of fat-soluble vitamins (A, D, E, K).

It is more prevalent in men than in women. The disease normally starts from age 30 to 60, though may begin in childhood. PSC progresses slowly, so the disease can be active for a long time before it is noticed or diagnosed.

Cholangiocarcinoma: PSC is associated with cholangiocarcinoma, which are tumors involving the biliary tree, and the lifetime risk for PSC sufferers is 10-15%. Screening for cholangiocarcinoma in patients with PSC is encouraged, but there is no general consensus on the modality and interval of choice.

Colon cancer: Colonoscopies are recommended with colon biopsies every 10cm.

Standard treatment includes ursodiol, a bile acid naturally produced by the liver, which has been shown to lower elevated liver enzyme numbers in people with PSC, but has not yet been proven effective at prolonging the life of the liver. Treatment also includes medication to relieve itching (antipruritics) and bile acid sequestrants (cholestyramine), antibiotics to treat infections, and vitamin supplements, as people with PSC are often deficient in vitamin A, vitamin D, vitamin E and vitamin K.

In some cases, ERCP, which may involve stenting of the common bile duct, may be necessary in order to open major blockages (dominant strictures).

Liver transplantation is the only proven long-term treatment of PSC. Indications for transplantation include recurrent bacterial cholangitis, jaundice refractory to medical and endoscopic treatment, decompensated cirrhosis and complications of portal hypertension. In one series, 1, 2, and 5 year survival following liver transplantation for PSC was 90%, 86% and 85% respectively.