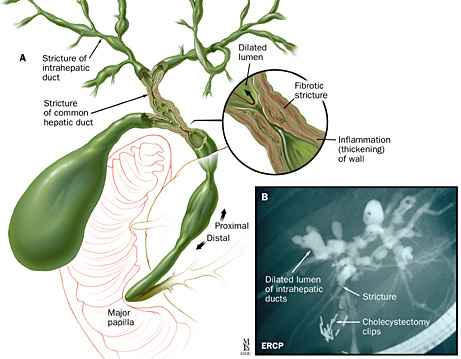 What Is Primary Sclerosing Cholangitis?

Primary sclerosing cholangitis is inflammation with progressive scarring and narrowing of the bile ducts in and outside the liver. Eventually, the ducts become blocked and then obliterated. Cirrhosis, liver failure, and sometimes bile duct cancer develop.

* An imaging test can confirm the diagnosis.

In primary sclerosing cholangitis, scarring worsens, eventually becoming severe (cirrhosis). The scar tissue narrows and blocks the bile ducts. As a result, bile salts, which help the body absorb fats, are not secreted normally. The disorder resembles primary biliary cirrhosis except that it affects the bile ducts outside the liver as well as those in the liver. The cause is not known but is likely to be autoimmune.

Primary sclerosing cholangitis most often affects young men, usually aged 30 to 60. It commonly occurs in people with inflammatory bowel disease, especially ulcerative colitis. It tends to occur in families. An infection or injury of the bile ducts may trigger the disorder in certain people. The bile ducts may also be injured during an endoscopic procedure, such as placement of tubes (stents) intended to keep the bile ducts open.

Symptoms usually begin gradually with worsening fatigue and itchiness. Jaundice (yellowish discoloration of the skin and whites of the eyes) tends to develop later.

Because bile salts are not secreted normally, people may be unable to absorb enough fats and fat-soluble vitamins (A, D, E, and K). Such impaired bile secretion results in osteoporosis, easy bruising and bleeding, and stools that are greasy and foul-smelling (steatorrhea). Gallstones and bile duct stones may develop. The liver and spleen may enlarge.

* Accumulation of fluid in the abdominal cavity (ascites)

* Liver failure, which can be fatal

Some people have no symptoms until the disorder is advanced and cirrhosis is present. Symptoms may not appear for up to 10 years.

Cancer of the bile ducts (cholangiocarcinoma) develops in 10 to 15% of people with primary sclerosing cholangitis.

The disorder may be suspected when results of liver function tests, done as part of an annual physical examination or for some unrelated reason, are abnormal. Then, ultrasonography is typically done first to check for blockage of bile ducts outside the liver.

Tests that can confirm the diagnosis include the following:

* Endoscopic ultrasonography:, A flexible viewing tube (endoscope) is passed through the mouth into the stomach and upper small intestine. A tiny ultrasound probe at the tube’s tip is used to obtain images.

* Endoscopic retrograde cholangiopancreatography (ERCP): X-rays are taken after a radiopaque dye, which is visible on x-rays, is injected into the bile ducts through an endoscope (see Diagnostic Tests for Liver, Gallbladder, and Biliary Disorders: Imaging Tests). ERCP is less desirable than MRCP because ERCP is more invasive and requires injection of a dye. However, ERCP can also be used in treatment.

Once primary sclerosing cholangitis is confirmed, the person must have yearly evaluations to monitor the progression of the disorder. MRCP may also be done regularly to check for cancer of the bile ducts.

Liver transplantation is the only treatment that prolongs life. It can cure some types of this otherwise fatal disorder. People with cirrhosis that causes serious complications or those with recurrent bacterial cholangitis may require liver transplantation.

If cancer of the bile ducts develops and surgery to remove the cancer is not possible, stents may be passed through an endoscope and placed in bile ducts that are blocked by the cancer. These stents open the ducts.