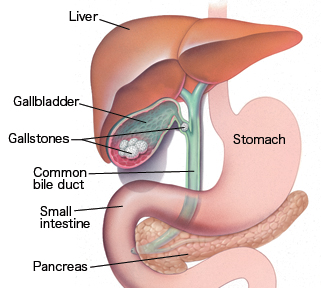 Gallstones are hard, pebble-like deposits that form inside the gallbladder. Gallstones may be as small as a grain of sand or as large as a golf ball.

Stones made of cholesterol, which are by far the most common type. Cholesterol gallstones have nothing to do with cholesterol levels in the blood.

Stones made of bilirubin, which can occur when red blood cells are being destroyed (hemolysis). This leads to too much bilirubin in the bile. These stones are called pigment stones.

Gallstones are more common in women, Native Americans, Hispanics, and people over age 40. Gallstones may also run in families.

The following also make you more likely to develop gallstones:

Medical conditions that cause the liver to make too much bilirubin, such as chronic hemolytic anemia, including sickle cell anemia

Rapid weight loss from eating a very low-calorie diet, or after bariatric surgery

Many people with gallstones have never had any symptoms. The gallstones are often found during a routine x-ray, abdominal surgery, or other medical procedure.

However, if a large stone blocks either the cystic duct or common bile duct (called choledocholithiasis), you may have a cramping pain in the middle to right upper abdomen. This is known as biliary colic. The pain goes away if the stone passes into the first part of the small intestine (the duodenum).

Symptoms that may occur include:

Pain in the right upper or middle upper abdomen:

May be sharp, cramping, or dull

May spread to the back or below the right shoulder blade

Yellowing of skin and whites of the eyes (jaundice)

Other symptoms that may occur with this disease include:

It is important to see a doctor if you have symptoms of gallstones.

Tests used to detect gallstones or gallbladder inflammation include:

Your doctor may order the following blood tests:

Some people have gallstones and have never had any symptoms. The gallstones may not be found until an ultrasound is done for another reason. Surgery is usually not needed unless symptoms begin. One exception is in patients who have weight-loss surgery.

In general, patients who have symptoms will need surgery either right away, or after a short period of time.

A technique called laparoscopic cholecystectomy is most commonly used now. This procedure uses smaller surgical cuts, which allow for a faster recovery. Patients are often sent home from the hospital on the same day as surgery, or the next morning.

In the past, open cholecystectomy (gallbladder removal) was the usual procedure for uncomplicated cases. However, this is done less often now.

Endoscopic retrograde cholangiopancreatography (ERCP) and a procedure called a sphincterotomy may be done to find or treat gallstones in the common bile duct.

Medicines called chenodeoxycholic acids (CDCA) or ursodeoxycholic acid (UDCA, ursodiol) may be given in pill form to dissolve cholesterol gallstones. However, they may take 2 years or longer to work, and the stones may return after treatment ends.

Rarely, chemicals are passed into the gallbladder through a catheter. The chemical rapidly dissolves cholesterol stones. This treatment is not used very often, because it is difficult to perform, the chemicals can be toxic, and the gallstones may return.

Electrohydraulic shock wave lithotripsy (ESWL) of the gallbladder has also been used for certain patients who cannot have surgery. Because gallstones often come back in many patients, this treatment is not used very often anymore.

Gallstones develop in many people without causing symptoms. The chance of symptoms or complications from gallstones is low. Nearly all patients who have gallbladder surgery do not have their symptoms return (if the symptoms were actually caused by gallstones).

Blockage of the cystic duct or common bile duct by gallstones may cause the following problems:

Call for an appointment with your health care provider if you have:

Pain in the upper part of your abdomen

Yellowing of the skin or whites of the eyes

In most people, gallstones cannot be prevented. In people who are obese, avoiding rapid weight loss could prevent gallstones.