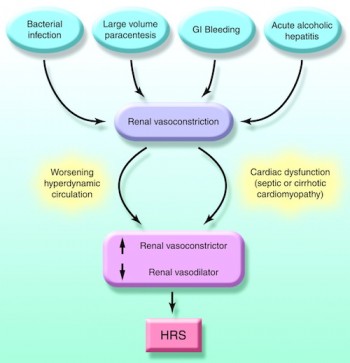 In some patients, type 1 HRS develops spontaneously without any identifiable precipitating factor, whereas in others it can occur in close association with systemic bacterial infections, in particular SBP, acute alcoholic hepatitis, and large volume paracentesis without albumin expansion. SBP precipitates type 1 HRS in approximately 20% of cases despite appropriate treatment and resolution of the infection (13). Similarly, large-volume paracentesis (>5 L) without albumin expansion may precipitate type 1 HRS in up to 15% of cases.

This complication is one of the reasons intravenous albumin is routinely administered after large volume paracentesis in cirrhotics with ascites. Renal failure occurs in approximately 10% of cirrhotic patients with gastrointestinal bleeding.

There are several predictive factors associated with a greater risk of developing HRS in cirrhotic patients with ascites.

For the most part these are related to circulatory and renal function. The most easily recognized are severe urinary sodium retention, spontaneous dilutional hyponatremia, and low mean arterial blood pressure (<80 mmHg). Interestingly, neither the degree of liver failure, as assessed by classic parameters of liver function (serum bilirubin, albumin, and prothrombin time) or the Child–Pugh classification, correlate with the risk of developing HRS.

refers to acute renal failure that occurs in the setting of cirrhosis or fulminant liver failure, sometimes also associated with portal hypertension, usually in the absence of other disease of the kidney.

It is usually indicative of an end-stage of perfusion, or blood flow to the kidney, due to deteriorating liver function. Patients with hepatorenal syndrome are very ill, and, if untreated, the condition is usually fatal. Treatment usually involves medical therapy or TIPSS as a bridge to liver transplantation.

However kidneys from patients with hepatorenal syndrome have been used successfully for renal transplant.

The hepatorenal syndrome is defined as renal failure that occurs in the setting of liver disease as follows:

Type I HRS is characterized by rapidly progressive renal failure with a doubling of serum creatinine to a level greater than 221 μmol/L (2.5 mg/dL) or a halving of the creatinine clearance to less than 20 mL/min over a period of less than 2 weeks. Type I HRS carries a very poor prognosis, usually with less than 50% survival at one month.

Patients with type I hepatorenal syndrome are usually ill, may have low blood pressures, and may require therapy with inotropes, or intravenous drugs to maintain blood pressure.

Type II HRS is characterized by a slowly progressive:

increase in serum creatinine level to greater than 133 μmol/L (1.5 mg/dL) or a creatinine clearance of less than 40 mL/min

It is typically associated with ascites that is unresponsive to diuretic medications, and also carries a poor, if somewhat longer (median survival ~6 months) outlook, unless the patient undergoes liver transplantation.

It can be challenging to distinguish hepatorenal syndrome from other entities that cause renal failure in the setting of advanced liver disease. As a result, additional major and minor criteria have been proposed to assist in the diagnosis of the hepatorenal syndrome.

Many other diseases of the kidney are associated with liver disease and must be excluded before making a diagnosis of hepatorenal syndrome. They include the following:

Acute tubular necrosis (ATN): This can be difficult to confidently diagnose. It may be an inability to concentrate the urine, if any is being produced. The urine sediment should be bland, microscopy may show hyaline casts. ATN may recover with supportive treatment only or progress to end-stage renal failure. In cirrhosis, urinary sodium is not a reliable guide to the development of ATN, as fractional sodium excretion may stay below 1 percent, due to the gradual worsening of renal ischaemia.

Other causes may include glomerular disease secondary to Hepatitis B or Hepatitis C,7 drug toxicity (notably gentamicin) or contrast nephropathy.

The renal failure in hepatorenal syndrome is believed to arise from abnormalities in blood vessel tone in the splanchnic circulation (which supplies the intestines).

It is known that there is an overall decreased systemic vascular resistance in hepatorenal syndrome, but that the measured femoral and renal fractions of cardiac output are respectively increased and reduced, suggesting that splanchnic vasodilation is implicated in the renal failure

There is activation of the renin-angiotensin-aldosterone system (RAAS) and the sympathetic nervous system, and profound vasoconstriction of the kidneys.

Many vasocontrictor chemicals have been hypothesized as being involved in this pathway, including vasopressin, prostacyclin, thromboxane A2, and endotoxin.