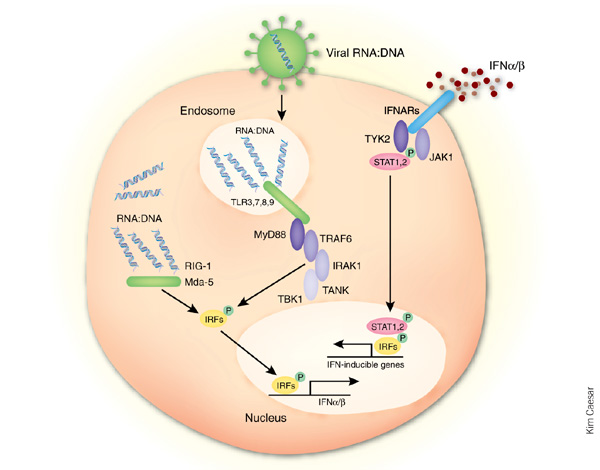 A person who is about to begin treatment with interferon, will likely be concerned about its potential side effects.  This is understandable.  After all, many people with hepatitis C feel fine, so it’s perfectly normal to worry about starting a medication that may make them feel sick.

Alternatively, some people with hepatitis C already feel run down as a result of the virus.  The last thing that these individuals want to do is to begin a medication that may make them feel even worse.Side effects associated with any drug, including interferon, vary from person to person.

It is a possibility that a person will have minimal to no side effects, or will even feel better than usual while on interferon. And, those that do experience adverse side effects usually do not experience them all the time. In fact, studies have shown that, only approximately two- to -five percent of people find the side effects of interferon so debilitating that discontinuation of therapy is necessary.

This article, parts of which are excerpted from my book  “ Dr. Melissa Palmer’s Guide to Hepatitis and Liver Disease”, discusses some helpful ways for people to deal with some of the potential side effects of interferon therapy.

Some General Points to keep in mind

So, don’t assume that the way you feel after the first injection is the way you will feel every time you inject. Some people schedule time off from work for when they plan to start interferon therapy. Or, they begin therapy during their vacation week.   Others plan to begin therapy when their work schedule or personal responsibilities are light, thereby making it is easier to get through the initial period.

If side effects become too severe, don’t be afraid to ask your doctor to help you apply for temporary disability.  Lastly, always keep in mind that the side effects due to interferon will totally abate after interferon therapy has been discontinued.

Flu-like symptoms are the most common side effect experienced while taking interferon.  Flu-like symptoms typically include a low-grade fever, chills, headache, muscle and joint aches, fatigue, and weakness.  These side effects may occur throughout treatment, but tend to be most pronounced during the first month of treatment and to diminish as treatment progresses.  They are best managed by taking acetaminophen about a half an hour prior to the interferon injection.

Aspirin and other non-steroidal anti-inflammatories (Motrin, Naprosyn) should be avoided, especially in people with advanced stages of liver disease with a significant amount of liver scarring (stage 3 or 4).  Also, injecting immediately prior to going to bed is helpful, since this will limit the side effects primarily to the sleeping hours.

However, if the side effects from interferon either cause or contribute to insomnia, then changing the injection time to the morning is advisable. Some individuals find that it is easiest to handle the side effects of interferon if they are busy working, as this deflects their attention from their symptoms.

Amantadine (Symmetrel) is an antiviral medication used to treat individuals with influenza A (the flu), as well as individuals with Parkinson’s disease (a neurological disorder).  Although some studies have demonstrated that amantadine may be an effective treatment for individuals with chronic hepatitis C, this finding has not been duplicated in most other studies.

Staying hydrated is probably the most important strategy for diminishing flu-like symptoms. Drinking approximately a gallon of water each day is recommended.  Several bottles of cold water should be a constant companion. Hot, humid weather tends to exacerbate any side effects of treatment.

Therefore, it is preferable to begin interferon therapy at a time when the weather is cool (if this is possible based on the location of your residence). If this is not possible, staying in an air-conditioned environment, especially during daylight hours is important.  Even short exposure to the hot sun may be harmful. Interferon tends to make people quite sensitive to the sun.

So, if you must go outside in the daytime heat, be sure to wear a hat and apply sunscreen liberally to any exposed areas.

Any chronic illness, especially liver disease, may cause a person to become anxious and depressed.  Furthermore, interferon itself may also cause or worsen underlying anxiety and depression.  Interferon therapy has additionally been associated with causing irritability, confusion, emotional instability, insomnia and a lack or concentration.

Therefore, people who have a psychiatric disorder, or who are prone to depression, emotional instability or other related symptoms, should begin an antidepressant or antianxiety medication at least three weeks prior to commencing interferon therapy.  In fact, it is probably beneficial for most people starting interferon therapy to begin an antidepressant or antianxiety medication.

All drugs are metabolized at least to some extent through the liver.  While individuals with a chronic liver disease should avoid any non-essential medications so as not to subject their liver to additional stress, this directive may be outweighed by the great benefit to be obtained by treatment with an antidepressant or an antianxiety medication while on interferon therapy.

Individuals who develop any severe psychiatric side effects while on interferon are best managed jointly by a liver specialist and a psychiatrist. If severe depression associated with suicidal thoughts should occur, interferon therapy should immediately be discontinued.

Interferon may also cause thyroid abnormalities, symptoms of which may mimic psychiatric disorders.  Individuals on interferon must have their thyroid profile periodically be checked via blood tests, especially when any of the above symptoms develop on therapy.   Finally, all alcohol, nicotine and caffeine should be eliminated, as these substances may exacerbate anxiety and depression.

Some people have difficulty falling asleep, whereas others have difficulty staying asleep. Many patients complain that they are tired all day, yet awake all night.  Others complain of erratic sleeping habits characterized by days of excessive sleep (a condition known as hypersomnia) alternating with days of lack of sleep (a condition known as insomnia).

Still others state that they experience delays of their usual bedtimes and wake-up times.  Most individual’s state that whatever sleep they do get is not refreshing. Interferon therapy often worsens these sleep disturbances.

The cause of sleeping disorders in people with liver disease is unclear, but most likely relates to alterations in melatonin (a substance produced by a gland that is involved in the sleep cycle) production by the body. Also, caffeine, nicotine and alcohol may contribute to disturbed sleep habits.  As such, abstinence from these substances will likely assist in the quest for a good night’s sleep.

Treatment of sleeping disorders associated with liver disease consists of both behavioral modification and medical management.  Individuals should use their beds only for sleeping, and never for other activities such as reading, watching television, or eating. These activities should be performed in other areas of the home.

If a person is unable to fall asleep within twenty minutes of retiring, he or she should get out of bed and read a book or perform another relaxing activity in another room.  Lights should be kept low, and the television turned off.  One should return to bed only when tired.

Also, people should make an effort to wake up at the same time each day, regardless of the amount of time spent sleeping during the night.  Although long naps of two to three hours during the day are not recommended, a twenty- to -thirty minute nap in the early afternoon, if it can be arranged, may have a salutary effect.

Alcohol should never be used as a sleeping aide.

As most prescription and over-the-counter sleeping pills are metabolized through the liver, they should be avoided, or else used in low doses, and only for short periods of time.  It is important to be aware that people with extensive liver damage (i.e. cirrhosis) are at increased risk of prolonged sedative effects if these medications are taken at their generally prescribed dosages.

Ambien (Searle), a prescription sleeping aide may be used on occasion. However, if Ambien is used nightly for more than a few weeks its effectiveness will typically diminish.  Furthermore, when used excessively (i.e. every night for more than two weeks), a dependence upon this medication may occur.

It should be noted that ambien has been associated with memory problems, which may be worsened by interferon therapy.  Therefore, one should use Ambien on a limited basis only, and under the strict guidance of a doctor.

Selective serotonin re-uptake inhibitors such as Celexa, Paxil, Zoloft and Prozac are generally safe for most individuals with liver disease, and may be of some benefit in treating insomnia.  Extra strength Tylenol PM (McNeil Consumer) may also be used in moderation.

Patients may also try melatonin (1-2mg/day), although one must remember that this supplement is not regulated by the FDA, and therefore the amount of active ingredient per pill may vary from one bottle to the next.

Some people are under the impression that interferon therapy will cause them to lose all their hair.  This is a total misconception. In fact, hair loss while on interferon therapy is quite infrequent.  If it occurs at all, the amount of hair lost is typically minimal and unnoticeable to others.  Individuals on interferon do not experience hair loss in the way that a cancer patient on chemotherapy does.

Hair loss when it does occur appears to be more frequent in Caucasians with black hair, and in Orientals.  People should refrain from using hair dye or bleach while on interferon therapy, since this may exacerbate the problem.  Many people have found the vitamin biotin (a B vitamin) to be helpful.

It is advisable to take this vitamin daily, upon the commencement of therapy.  It should be used in conjunction with Nioxin shampoo, Nioxin conditioner and Nioxin hair growth promoter. Nioxin hair loss treatment should be started about a month prior to starting interferon. Fortunately, any hair loss induced by interferon therapy is temporary, and regrowth typically occurs within three to six months from the drug’s discontinuation.

In fact, many people have noted that their hair grows back thicker, straighter, and shinier than before!

The purpose of this article was to provide you with information you can use to minimize the potential side effects of interferon.  Hopefully, the knowledge you have acquired will reduce the anxiety that commonly precedes the commencement of therapy.  For additional information on managing the side effects of interferon you may wish to consult my book.  Until next time – continue to keep up the fight for a healthy liver.