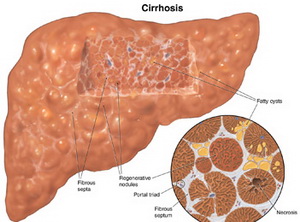 If you had the idea that alcohol and obesity were primarily responsible for fatty liver and other liver diseases, here is a report that turns this theory on its head. Non-obese and non alcoholic people also fall prey to liver diseases, including the cirrhosis of the liver.

A study by a team of Kolkata doctors has revealed a high prevalence rate of non-alcoholic fatty liver (NAFL) and other liver diseases among the non-obese, non-alcoholic people from poor families. The remarkable findings by the team of doctors from SSKM’s School of Digestive & Liver Diseases (SDLD) breaks the myth that NAFL is particular to developed countries that are associated with industrialisation, sedentary lifestyle and obesity.

A sample size of 1,911 adults from Nagari panchayat in Birbhum district were chosen for the study. A majority of them belonged to the below poverty line category and are either agricultural workers or labourers. People from this region and economic background were chosen so that they can be taken as representatives of those living in less developed regions across the country.

None had either hepatitis B or C that can trigger liver ailment. And despite the fact that about 47% of them were malnourished, the most remarkable finding of the study is that about 9% of this sample — who did not consume alcohol and were not obese — had fatty liver.

“Confirmation for NAFL was done by dual radiological screening consisting of ultra sonography and CT scan in order to double check for an absolutely error free result. The study was conducted over a period of two years,” said gasteroenterologist Dr Khaunish Das, who was a part of the team.

Because of the significant prevalence of NAFL and higher risks of liver diseases — including cryptogenic cirrhosis — in this non-obese, non-alcoholic, non-affluent population, the researchers believe NAFL will be a major determinant for future liver disease burden in developing economies.

The study highlights two issues. First, NAFL is prevalent among individuals in developing countries who many not have the typical metabolic risk factors for NAFL and therefore, perceived to be not in the risk category for the condition. Secondly, NAFL in this Birbhum population could be similar to NAFL in other population from similar backgrounds.

“The study has shown that non-obese people who are physically active and without a bulging waistline can also have fatty liver. In fact, this study provides evidence for the first time that NAFL will be an important determinant of liver disease burden even in poor and emerging economies,” said Dr Abhijit Chowdhury who heads SDLD.

The findings of the study have been published recently in two reputable journals — ‘Hepatology, the journal of American Association for the study of liver’ and ‘Nature Reviews’.