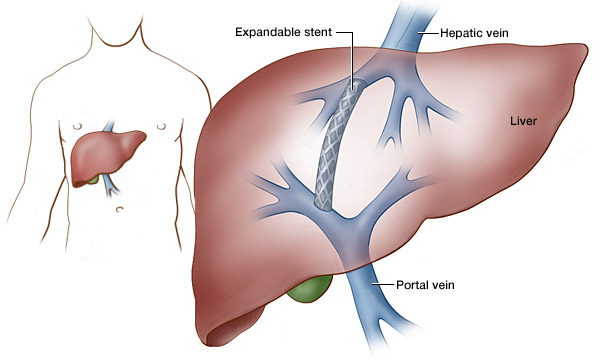 CONCLUSION: Morbidity and mortality following angioplasty ± stenting and TIPS are low with satisfactory outcome. Proper patient selection and management of shunt dysfunction are crucial in improvement.

If obstruction is due to endoluminal venous lesion like thrombosis, primary BCS is considered. In secondary BCS, the cause originates from neighboring structures like extrinsic compression or tumor invasion.

The goals of treatment are to prevent extension of thrombosis in hepatic veins (HVs) and to alleviate venous obstruction in order to decrease hepatic congestion. Few patients respond to medical treatment (anticoagulation ± thrombolytic therapy, diuretics). However, most patients need intervention to restore the hepatic blood flow.

If there is a possibility of restoring hepatic venous outflow in one of the major HVs by balloon dilatation, recanalization, or stent insertion, then this is the procedure of choice as it is the most physiological method. However, in cases where blood flow cannot be restored or when the approach fails, transjugular intrahepatic portosystemic shunt (TIPS) is used as a decompressing non-surgical procedure[

Study Design & Sampling: This prospective follow-up study was conducted on twenty five patients with confirmed diagnosis of primary BCS and eligible criteria for radiological intervention, who were presented to the Budd-Chiari Study Group and admitted to the Tropical Medicine Department, Ain Shams University Hospitals.

Patients were subjected to: (1) Complete Clinical Evaluation; and (2) Radiological Assessment, with special stress on the patency of HVs, portal vein and inferior vena cava (IVC) by abdominal Duplex/US. Abdominal MRI, MR venography or multislice CT scan were done to confirm diagnosis and to delineate vascular anatomy before intervention.

Details of the study and interventions were explained to recruited patients who signed a written consent form.

Routine laboratory investigations and thrombophilia workup were done aiming at identification of etiology of BCS, in addition to assessment of liver disease severity.

Patients’ general health was assessed according to WHO performance status scale:

Patients were classified as follows:

According to Rotterdam prognostic classification into 3 classes with scores according to the equation: 1.27 × encephalopathy + 1.04 × ascites + 0.72 × prothrombin time + 0.004 × bilirubin Ascites and hepatic encephalopathy were scored as present (1) or absent (0) and prothrombin time as higher (1) or lower (0) than 2.3 INR. Bilirubin was included as a continuous variable. Where Class I (0-1.1): good prognosis; Class II (1.1-1.5): intermediate prognosis and Class III (> 1.5): poor prognosis.

According to Child-Pugh score into 3 classes (A, B and C).

Antibiotic prophylaxis was administered for all patients (1-2 h) before intervention in the form of combination of ampicillin- sulbactam 1.5 gm IV and cefotaxime 1 gm IV

All procedures were performed in an angiographic interventional room with high resolution C-arm fluoroscopy, and digital subtraction angiography.

Interventions were done under general anesthesia.

All cases of TIPS or angioplasty with stenting had self expandable non covered metallic stents.

Patients were admitted to hospital for 1 wk after procedure for early detection and management of any procedure-related complications and adjustment of anticoagulation.

Antibiotics regimen taken before procedure was continued for 5 d after.

Duplex U/S was performed to detect shunt patency at days 1, 3, and 7 after the procedure.

Patients were followed up clinically, by laboratory investigations (mainly liver profile and PT and PTT for monitoring of anticoagulation) and radiologically by duplex U/S.

Follow up after intervention was every three mo or when indicated (e.g.: clinical manifestations suggestive of angioplasty or TIPS dysfunction). Follow up was intended to be at least one year (Minimum: 12 mo, Maximum: 32 mo).

(1) Assessment of patients’ survival and shunt survival (i.e.; shunt patency and function) (at one year interval and at the end of follow up); (2) Description of procedures related complications and their management; and (3) Assessment of patients’ improvement after intervention by comparison of clinical, laboratory and performance status criteria before intervention and one year after.

Thirteen patients (52%) were candidates for TIPS.

Figure shows patency rate in patients who underwent angioplasty ± stenting procedures; it was 11/12 (91.7%) at 9 mo (due to persistent shunt occlusion in one patient). Patency rate dropped to 10/12 (83.3%) at one year and continued till the end of follow up at 32 mo. (There was persistent shunt occlusion in 2 patients in spite of repeated revisions and optimal anticoagulation therapy).

This is the first study that addresses the short term outcome of interventional radiology procedures in management of Egyptian patients with BCS. In this study, 12 patients (48%) had short segment occlusion that enabled us to perform angioplasty with stenting in ten cases and without stenting in two cases. Thirteen patients (52%) were not suited for angioplasty and had TIPS.

According to Xu et al[13], short-term results of balloon angioplasty alone without stenting were excellent but the sustained patency rate was only 50% at two years after the procedure. In this study, one of the cases that had angioplasty alone was still having patent shunt at 24 mo after the procedure without any need for shunt revision; the other one had occluded shunt on the seventh day that necessitated re-intervention in the form of TIPS which was still patent at 20 mo after procedure.

Patency rate in patients who underwent angioplasty ± stenting procedures was 10/12 (83.3%) at one year and at the end of follow up due to persistent shunt occlusion in 2 patients in spite of repeated revisions and optimal anticoagulation therapy. This is a more or less satisfactory outcome; however it might have been influenced by the relatively short follow up period (ranging from 12 to 32 mo) as well as most of the patients having good or intermediate prognosis according to Rotterdam score. The need of revision in cases with angioplasty ± stenting was 41.6% (5 out of 12 cases). One year survival was 100% and at the end of follow up, survival dropped to 91.6% due to death of one patient who had occluded shunt after one year and was also referred for mesoatrial shunt due to occlusion of IVC.

Stent migration, which is very rare, occurred in one angioplasty procedure (3.84%) where stent migrated to the heart just after insertion. However, no serious complications occurred and stent was embedded in the wall of right atrium and the patient was quite well.

Post procedure (angioplasty ± stenting) bleeding was encountered in 3 procedures (11.53%), 2 of which were intraperitoneal and one of which was hemobilia. All 3 cases were managed conservatively by temporary stoppage of anticoagulation and blood transfusion when indicated. This complication could be attributed to the application of a transhepatic approach in these procedures. Beckett and Olliff[5] stated that this approach has the merit of simplicity over a transjugular or transfemoral approach, as well as feasibility with major superior vena caval obstruction but with a potentially greater risk of bleeding.

Post procedure sepsis occurred in 3 procedures (11.53%) in spite of antibiotic prophylaxis with cefotaxime in combination with ampicillin-sulbactam. This could be due to infection from resistant organisms. According to McDermott et al[15], pathogens that precipitated infection after angioplasty and stent were Staphylococcus aureus and S. epidermidis, which were sensitive to cefazolin.

In this study, the results of angioplasty ± stenting agreed with Fisher et al who stated that, with appropriate case selection, many patients with BCS caused by short length HV stenosis or occlusion may be managed successfully by angioplasty ± stenting with a good outcome following the procedure, provided that anticoagulation is maintained.

According to the authors’ comparative study between percutaneous angioplasty and operative shunt surgery; both groups had the same re-occlusion rate and both were related to suboptimal dose of anticoagulation.

In the current study, 13 patients (52%) were not candidates for angioplasty and underwent TIPS. The need for revision was 38.4% (compared to 41.6% in angioplasty ± stenting). One year and end of follow up survival rates following TIPS were 100%. This could be attributed to the relatively short follow up duration (ranging from 12 to 32 mo) and good selection of cases, as most of our patients had good or intermediate predictable prognosis according to Rotterdam score.

The results of the current study are much better than what had been reported by Valla[17].