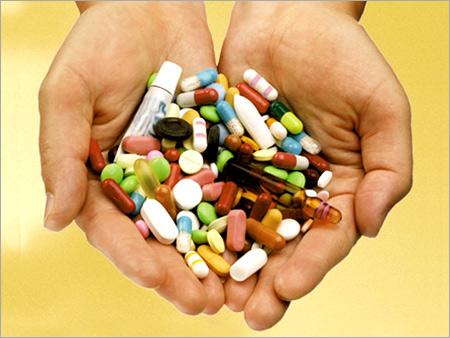 Patients with cirrhosis should not take Non-Steroidal Anti-Inflammatory Drugs (NSAID) such as Advil (Ibuprofen), Motrin (Ibuprofen), or aspirin-type drugs. Tylenol (Acetaminophen) is safe if you take less than six 325 mg tablets each day (2,000 mg per day).

Because cirrhosis patients are at increased risk of ulcer disease, you should discuss with your doctor about taking an anti-ulcer drug. View a list of medications that can harm the liver, and a list of herbal medications you should avoid.

For patients with liver disease, the ingestion of everyday drugs may cause further damage as the liver breaks down these toxic substances from the bloodstream. Because the length of time for liver injury to occur may vary from days to months, frequent blood tests are necessary to monitor possible damage.

Following is a list of hepatotoxic drugs. Patients who take these medications (regularly or daily) should undergo monthly laboratory testing for the first three months of therapy and then every three to six months because of the association between these medications and liver disease.

acetominophen, particularly hazardous when taken with alcohol or anti-seizure medications

vitamin A (in doses greater than 5,000 Units/d; beta carotene is safe at all doses)

According to the April 1996 New England Journal of Medicine, the most common cause of acute liver failure in the United States is the negative interaction between acetaminophen (Tylenol) and alcohol. In addition, there are interactions that are less common but equally as serious. Research suggests individual genetic variations in liver enzymes may be the cause.

For information on cytochrome P450 drug interactions or to order a pocket reference card, visithttp://medicine.iupui.edu/flockhart/

Herbal medications are a part of standard eastern medicine. Today, more patients and an increasing number of physicians are using single herbs and combinations in western medicine. Although these preparations are believed to have some medicinal value, there is also a risk of toxicity.

The following herbs have been described to cause a variety of liver problems ranging from hepatitis to liver failure and should not be consumed if you have liver disease (1,2). If you are being treated with interferon, herbs should not be taken unless under strict supervision. Make sure you discuss the potential reactions and interactions with both Western and Chinese medicine practitioners before taking any medication or herbal remedy. Although universally liver-toxic substances are identifiable in the laboratory, liver hypersensitivity problems are not predictable. One person may experience no negative side effect from a medicinal substance; another may have organ failure. Although you cannot predict hypersensitivity in all cases, some indicators may offer clues as to who is vulnerable and who is not.

You have multiple allergies and have had previous adverse reactions to drugs or herbs.

You have a history of chronic skin rashes.
You have liver disease — although herbs that benefit the liver are not harmful, it is recommended that if you have another, unrelated medical condition in addition to liver disease and you are going to treat it with herbs, you exercise extreme caution and monitor all posible adverse reactions carefully.

You should discontinue taking any herb if you experience a skin rash, substantial nausea, bloating, fatigue and/or aching in the area of your liver, yellowing of the skin or pale feces.

Additionally, you should discontinue taking any herb if you experience a skin rash, substantial nausea, bloating, fatigue, aching in the liver area, yellowing of the skin (jaundice) or pale feces.

Germander (mint family) – this toxic herb is often substituted for skullcap, and skullcap is not toxic in well-formulated herbal remedies. However, always insist that any ingredient identified as skullcap be the genuine article and not germander.

*It appears that St. John’s Wort and milk thistle (silymarin) do not have significant liver toxicity potential.

Herbal patent medicines, tonics, elixirs and prepackaged solutions are particularly risky for anyone, whether they have liver disease or not. Far too often ingredient labels are incomplete or mistranslated. Herbs are mistakenly used in the concoctions that are dangerous or inappropriate in combination with other herbs. Toxic herbs are substituted for beneficial ones. And herbal ingredients that are generally harmless can cause liver damage in a very small group of allergic or intolerant individuals.

The best advice is to avoid all premixed preparations. Rely on the best-trained and most experienced herbalist available to individualize your herbal therapy and monitor your reactions.

Following is a list of contaminated formulas containing heavy metals, poisons and other potentially liver-toxic substances identified by the Oriental Herbal Association:

The above are premade formulations that are contaminated with toxins, but when herbalists make them up, the proper versions of the formulas can be salutory.

The following list, provided by the Oriental Herbal Association, identifies harmful ingredients for which patients with liver disease should be on guard:

Bufonis – can paralyze the heart muscle and lungs

Buthus – Causes paralysis of the heart and death

Licorice – A mainstay of Chinese formulas, licorice is used in very small quantities to balance herbal action and often appears as glycyrrhizin (licorice root). However, licorice produces well-documented side effects such as hyperaldosteronism (an increase in levels of the adrenal hormone aldosteron, triggering imbalance of electrolytes) when taken in doses of more than 50 grams a day or for six weeks or longer. However, no side effects have been seen in smaller doses over 30 days or in higher doses for a very short period of time.

Skullcap – Also called scutelleria, this herb is used in many formulas to good effect. However, it appears that the toxic substance, germander, often is substituted for skullcap in formulas without being properly identified. As a result, skullcap looks like the offending substance. Whenever skullcap appears in a formula make sure that it, not germander, is in fact being used. If you cannot be sure, do not take the formula or herb.

There has been one mention of toxicity in the literature for the following herbs. Further research is needed.