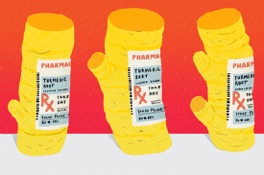 The root’s potential health benefits are powerful. But questions remain about how best to take the stuff.

From teas and juices to capsule supplements, turmeric is popping up everywhere these days. And for good reason: Curcumin—a molecule found in turmeric that gives the root its distinctive orangey-yellow hue—appears to be a potent inflammation blocker.

That’s big, because inflammation causes or contributes to almost every major disease, including cancer, cardiovascular disease, diabetes and depression, says Dr. Bharat Aggarwal, professor of medicine at the MD Anderson Cancer Center at the University of Texas. “Wherever inflammation is a problem, curcumin may be helpful,” Aggarwal says.

The chemistry of chronic inflammation is complex. But in very simple terms, a signaling protein called tumor necrosis factor alpha (TNFα) plays a large role in driving systemic, disease-causing inflammation. Pharmaceutical drugs that block or inhibit TNFα are now being used to treat inflammatory bowel disease, psoriasis, arthritis and many other diseases. Like those drugs, curcumin seems to lower TNFα, Aggarwal says.

He hedges with terms like “seems” and “may” because, while promising, a lot of the research pointing to curcumin’s benefits has involved animals or lab work—not people. “If rats and mice were perfect indicators of a treatment’s effectiveness, every disease would be gone by now,” Aggarwal says. “But I’ve been working with curcumin and turmeric for 25 years, I’ve seen and studied the effects, and I can’t deny the benefits I see.”

Posted in In The News, Vits, Mins and Supps
← Transplant – The Big Day.Zepatier Hepatitis C Drug From Merck Is Approved →