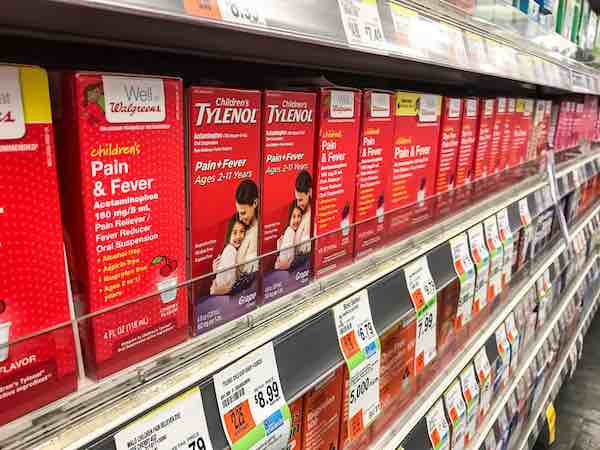 Millions use Tylenol on a daily basis without concern, but it has a wide range of toxic side effects you should be aware of, especially if you are pregnant or use it with your children.

A number of non-peer-reviewed articles have been written and published on the web claiming that there is literally nothing to fear from acetaminophen during pregnancy.

There are two types of articles that fall into this category. First, reputable watchdog organizations have weighed in on the issue, declaring acetaminophen use during pregnancy and during childhood to be proven safe. In particular, the National Health Service of the UK and the Center for Accountability in Science have both strongly criticized the Spanish study from 2016 showing a link between acetaminophen use during pregnancy and ADHD/autism.

The second type of article is generally written by a science writer working for an organization that runs a website.

Often quoting one to three experts who claim that is perfectly safe and that pregnant women and families should not be concerned, many of these articles are published by reputable sources that are generally trustworthy.

Typically, an expert is being asked to comment on one particular publication showing a link between acetaminophen use (usually during pregnancy) and some sort of neuropsychiatric problem (autism, lowered IQ, hyperactivity, and/or social/behavioral problems, depending on the study).

Who is an Expert?

There are several important things to consider when evaluating these articles:

1.  There are a number of University Professors who have studied the use of acetaminophen on the developing brain and who are keenly aware of the potential dangers. A partial list of these individuals is provided below.

These facts include the following:

(a) Studies in animal models (both in mice and in rats) demonstrate that acetaminophen use during a sensitive period of brain development causes long-term alterations in the brain and is manifested as problems with social function.

(b)  Margaret McCarthy, Chair of Pharmacology at the University of Maryland, has worked out the probable mechanism by which acetaminophen-induced brain damage occurs. Her research team has found that the male brain is considerably more sensitive to acetaminophen than the female brain, possibly accounting for the gender bias in autism.

(c) There are (as of January 2017) a total of 8 published studies evaluating the long terms effects on children of acetaminophen use during pregnancy or during childhood. Two of these (one in 2014, one in 2016) were published in JAMA Pediatrics, one of the most highly respected pediatric journals. All studies point toward acetaminophen use being associated with long-term problems with neurological function. Each study design has included some attempt to control for indication. In all studies, acetaminophen use rather than indication has been identified as the key factor associated with cognitive problems. A formal meta-analysis is not currently possible because of the varied outcome measures and study designs, but all 8 studies point in the same direction: Acetaminophen is neurotoxic to the developing brain. The studies are not “cherry picked”, selecting only those which find an effect. All studies point toward a neurotoxic effect of acetaminophen in the developing brain.

4.     It is tempting to point accusing fingers at physicians who say that acetaminophen is safe when they literally have no grasp whatsoever of the relevant scientific literature. However, this would be a mistake. I have tracked down a few of these individuals who were quoted in a very public format, and one individual, in particular, didn’t even remember having made a comment on the topic. The most likely explanation is that a reporter asked them if acetaminophen was safe, and their response based on their training (not on the knowledge of the literature) was that it is safe. After all, if they didn’t think it was safe, they would not be administering it dozens of times per day.

So, if a reporter asks a physician if something is safe, and they provide their knowledge based on what they have been taught and how they practice, then it is hard to blame them. The reporter didn’t ask them to spend days or even weeks reviewing the literature in detail, but rather assumed that any physician administering something dozens of times per day would know the literature. (This is a false assumption. No physician has the time to study all current literature on every drug they administer.) So, in a nutshell, a tragic propagation of incorrect information is occurring despite the best of intentions of all parties involved.

5.     Unless an organization such as the National Health Service has the time to review a topic thoroughly, they should remain silent on an issue. It took a team of us two years to put together our summary of the evidence, both direct and circumstantial, regarding the potential neurotoxicity of acetaminophen during development. It took the NHS only days to publish their recent criticism of the 2016 Spanish study. Offering questionable criticisms of a single paper without reviewing the literature to see how that publication fits into the big picture is a disservice to the public being served.

6. Reading the published quotes from many “experts” who exonerate acetaminophen, it is apparent that the logic falls into one of two categories.

(a) Everybody is doing it, so it must be OK.

(b) This single study is not perfect, so no change in practice should be made.

Neither of these criticisms is logically sound, of course. These two criticisms are often combined and were, in fact, part of the critical comments directed toward the first paper showing that acetaminophen probably has substantial neurotoxicity during development (published in 2008 by Steve Shultz). Further, the evaluation of study weaknesses is usually skewed and not entirely valid. Since the idea that acetaminophen is safe is being embraced, then any merit in the paper is often undermined to make the case. This is certainly true of the published (peer reviewed) criticisms of the 2008 Shultz paper.

7.     Many on-line sources support the view that acetaminophen can be very dangerous to the developing brain. Probably the most reliable source, the FDA, is remaining silent on the topic until something more definitive is done. The FDA knows that this is extremely urgent, but unfortunately, our FDA is not linked well (in a practical manner) with our NIH, and thus they can’t dictate research priorities.

8.     Here is a list (not comprehensive) of experts regarding the neurotoxicity of acetaminophen during brain development.

a) First, I’ll thank the wonderful team of individuals who helped put together our comprehensive review on this topic. Shu Lin, a professor with me in Duke’s Surgery Department, is a very dear and long-time friend of mine who has supported me through countless projects over the past 22 years. Staci Bilbo, director for research on Autism at Harvard, is a friend and collaborator who has helped me understand what causes inflammation and the role of inflammation in brain dysfunction. Chi Dang Hornik, a pediatric pharmacist at Duke, contributed greatly to our understanding of the frequency of acetaminophen administration and the available formulations of the drug. Many thanks to Martha Herbert. As a Harvard professor and clinician, she has a great appreciation for the clinical data obtained from patients with autism. Cindy Nevison, a professor at the University of Colorado at Boulder, rounds out our team, providing critical information about the epidemiology of autism. (Thanks also to our interns (Rasika Rao and Lauren Gentry) and research analyst (Zoie Holzknecht) who were a tremendous help in compiling information and preparing that information for publication.)

b) Margaret McCarthy, chair of Pharmacology at the University of Maryland, it the most knowledgeable person I know regarding the biochemistry of the human brain and how that is affected by acetaminophen and other drugs in that class.

c) Chittaranjan Andrade, Chair of Psychopharmacology at the National Institute of Mental Health and Neurosciences, Bangalore, India, has written a peer reviewed paper on the topic of acetaminophen induced brain damage. He nicely summarized a number of studies looking at the connection between acetaminophen and neurological damage. His final conclusion is that the drug is probably more associated with ADHD than autism, but the conclusion was limited to exposure during pregnancy and his work was conducted before some critical studies were published in 2016.

d) Henrik Viberg is a professor in the Department of Organismal Biology at Uppsala University in Sweden. He has studied how exposure of mice to acetaminophen during development can cause long term brain damage.

e) In 2015, a group of scientists working with Laurence de Fays at the Federal Agency for Medicines and Health Products in Brussels acknowledged the clinical studies and the studies in animal models which indicated that acetaminophen could be dangerous to the developing fetus, but concluded that paracetamol is “still to be considered safe in pregnancy”. At the same time, they state that “additional carefully designed studies are necessary to confirm or disprove the association (between acetaminophen and brain damage to children)”, and that “care should be taken to avoid raising poorly founded concerns among pregnant females”. We very strongly agree with the conclusion that more studies are needed, but very strongly disagree with the conclusion that women should be kept in the dark about the matter. It is important to point out that several more studies have come out since Laurence de Fays’ report. One of those is a 2016 manuscript in JAMA Pediatrics (see the next expert), a highly reputable peer reviewed journal, which addresses the concerns raised by de Fays, so it is possible that de Fays’ group may now have a different opinion.

f) A team of scientists and doctors working with Evie Stergiakouli at the University of Bristol analyzed data from a prospective birth cohort, and concluded that “children exposed to acetaminophen prenatally are at increased risk of multiple behavioral difficulties”. They found considerable evidence indicating that the association was not due to the confounding factors that concerned de Fays’ group (previous expert).

g) Jordi Julvez at the Centre for Research in Environmental Epidemiology in Barcelona, Spain worked with a team of a dozen clinicians and scientists to publish their 2016 study linking acetaminophen with autism and ADHD.

i) The original paper that identified a connection between neuropsychiatric disorders and acetaminophen was published by Steve Shultz while at the University of California at San Diego. Coauthors on the paper included Hillary Klonoff-Cohen, currently an Endowed Professor and Director of the MPH program at the University of Illinois.

j) Four scientists, including research scientist Ragnhild Eek Brandlistuen and professors Hedvig Nordeng and Eivind Ystrom in the Department of Pharmacy at the University of Oslo, coauthored a study showing a connection between adverse neurodevelopment and acetaminophen use during pregnancy.

k) Jorn Olsen, Professor and Chair of the Department of Epidemiology at UCLA, published one of the more recent papers (2016) showing a connection between autism and acetaminophen use during pregnancy.

l) Five professors (John M. D. Thompson, Karen E. Waldie, Clare R. Wall, Rinky Murphy, and Edwin A. Mitchell) from four different departments at The University of Auckland published their findings in PLOSone in 2014 which “strengthen the contention that acetaminophen exposure in pregnancy increases the risk of ADHD-like behaviours. Our study also supports earlier claims that findings are specific to acetaminophen.”

By William Parker – William Parker is an Associate Professor at Duke University, where he has worked in the Department of Surgery since 1993.  William is currently investigating a number of issues associated with inflammation and Western society, including vitamin D deficiency, heart disease and alteration of the symbionts of the human body (“biota alteration”). He has been interested in “natural” immune function for some time, which has led him down a path that includes the first studies of immune function in wild rats and the discovery of the function of the human appendix.

Posted in Environmental and tagged acetaminophen, tylenol
← MELD and the Waiting List for Liver TransplantMan-made chemicals cause changes in sheep livers →