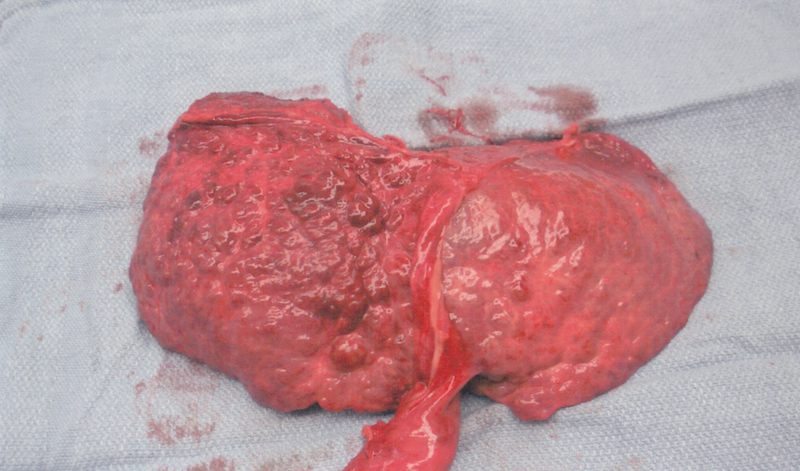 In order to begin to understand about cirrhosis and why the disease is quite so devastating we need to start with the liver.

This rather nasty picture is of a cirrhotic liver which was taken out of a friend of mine. She was 22 years old at the time and suffered with Cryptogenic Cirrhosis (which means the cause is unknown).

To many of us, myself included our first introduction to a liver was some rather nasty, chewy, grayish, brownish offal that was served up at school lunches. Onions and gravy made it somewhat digestible but it usually had really big veins running through it and any meat had to be surgically dissected from the veins.

Most of us, if asked what the liver actually did would probably only have a faint idea about it. Most of think it is just a big filter. Well, yes it is, but it also has an awful lot more to do.

The liver is the powerhouse of the body, it is the largest organ in the human body weighing in at about 3 pounds and is located under the diaphragm on the right side of the body.

The liver performs, day in and day out over 500 vital functions which are necessary to keep the body alive. It is a filter, a detoxifier, a regulator, a controller, a back-up storage unit and an energy converter.

Pretty much everything we eat, drink, breathe, touch will have an impact in one way or another on the liver. It is an insane, chemically driven body life support system.

Unlike most other organs in the body, we only have one of them – there is no reserve. It is the only organ in the body which is fed life-giving blood from two different directions. Because it is on its own, it possesses the most amazing powers of self-regeneration in that damaged cells are removed and replaced continuously.

It is a chemical factory, manufacturing enzymes and proteins that are used to control other parts of the body. One of its most important proteins is one called albumin which is critical to the human body.

Albumin, manufactured by the liver and released into the blood stream becomes like an army of mini-livers, doing a lot of the liver’s cleansing and regulating functions remotely around the body. Albumin, as we will later learn is central to issues regarding cirrhosis.

Life without a liver is not possible and it is no coincidence that the health of the liver reflects the health of the body as a whole. So as humans, given this simply amazing piece of engineering to look after our bodies, we set out to throw as much abuse at it as we can!

The over eating, the bad diet, the excesses of consumption, the drugs, the drink, the alcohol, the air or smoke we breathe, we subject our livers to an enormous workload just trying to keep us alive. The liver does all this normally without complaining.

But everything has its limits and continual abuse can take its toll and when the ability to damage outstrips the ability to recover the party comes to a very quick end!

There is no absolute ‘amount’ or measure of abuse that the liver can take in its stride, they are all different as we are all different. Many factors can upset the livers natural survivability including genetic issues, disease issues, chemical exposure, poisons, viruses, cancer  etc.

With alcohol, for example, there is no safe limit. Alcohol is a poison. Some people can drink vast quantities and never suffer, some may consume a little and get very ill, some may consume none at all and die from liver issues.

Ultimately when the destruction of the liver gets too great it changes from being a wonderful smooth malleable organ into being a knotted, swollen or shrunk blockage through which blood can no longer flow freely.

This knotting is called fibrosis and once this fibrosis, which is caused by the liver attempting to repair itself becomes widespread, scarring occurs which obliterates the tissue of the liver. Scarring is the classic sign of a cirrhotic liver.

Cirrhosis doesn’t just happen. it can take years of systematic abuse for the liver to degenerate to the point that it can no longer undertake the functions it was designed to do. Remember also that the power of the liver is such that it only needs maybe 20% of it to function and maintain life.

Little wonder then, given the huge involvement in every aspect of our bodies health that liver issues become very serious, very quickly. Cirrhosis, disease of the liver is often fatal.

Over time, damage to the liver will accumulate, normally without any physical symptoms.

Liver disease goes through 3 distinct phases before arriving at the 4th stage, cirrhosis. Unless a person is very lucky liver disease will remain undetected until it has become cirrhosis. Not for nothing is cirrhosis known as a ‘Silent Killer’.

Even at the cirrhotic stage, the liver can regenerate and recover and as long as the cause of the damage is removed, the prognosis is good. However, if urgent action is not taken the final stage comes into play, this being End Stage Liver Disease (ESLD).

End Stage is a politically correct way of saying Terminal.

Posted in Living With Liver Disease
← What is hereditary hemochromatosis?'Liver cirrhosis from binge drinking made me look pregnant ' →