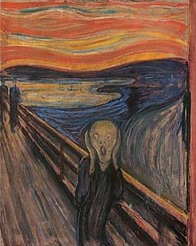 All apply to the third component of our Trinity of ascites, varices and this, hepatic encephalopathy. This is possibly the worst of the symptoms and certainly the least understood.

In simple terms hepatic encephalopathy (HE) is the accumulation of toxins or poisons in the blood supply to the brain due to impaired liver function. In the same way as a drug or alcohol can affect our mental state, toxins that build up in the blood supply do the same.

These toxins cause our brains not to function as normal or desired. They are poisoning us.

In practice the actual cause of HE is unknown. Poor liver function is usually the pre-cursor for it to happen, but the agents or toxins and the other contributory components are many, varied and not understood. It may be acute or chronic, may begin slowly or suddenly, may come and go and be predictable or may progressively worsen.

It is always dangerous. and may become a medical emergency.

If the causes of HE are unknown and misunderstood, unfortunately so is the treatment. If we concentrate on the blood supply and the toxins as the cause, which in the case of cirrhosis it most probably is, the problem we have is that everything that a person touches, eats, drinks and breathes will end up in their blood supply.

When our liver is damaged and unable to remove these toxins the condition arises, but which toxins are responsible is unknown.

In trying to write this section I am struggling with what is accepted as current cause and treatment and the issues I have with those causes and treatment.

When people discuss HE, the overwhelming cause is cited as ammonia in the blood and the ‘treatment’ prescribed is Lactulose. Here lies our first problem.

Clearly there is an issue in the connection between ammonia and HE.

Then comes our second problem, namely the ‘treatment’. The accepted treatment for HE is to administer Lactulose which is a laxative. Lactulose works by creating an acidic environment in the intestines, which due to osmosis, draws ammonia out from the blood supply and into the intestines where in due course nature takes over and the ammonia is expelled. The problem is that Lactulose doesn’t just get rid of ammonia.

Lactulose is not selective. Lactulose is a laxative. Lactulose gets rid of everything! Anything that can be ‘pulled’ from the blood supply or is resident in the intestines is uncontrollably expelled in what I describe as like a peruvian mudslide! This enforced diarrhea can be explosive, violent and usually inconvenient!  The expulsion includes blood trace elements, vitamins, minerals, nutrition, in fact everything we need as a living being to live!

Nutrition is key to dealing with cirrhosis. The only way that liver function may be improved is through nutrition. Not drugs, not medicines, not pills and potions or magical lotions.

As I will discuss later, cirrhosis or liver disease is largely or even mostly, a disease of malnutrition. The liver is an incredible organ capable of fantastic feats of survival, but it needs help, not much help, just good nutrition.

It seems incredible that one of the ‘treatments’ for one of the worst symptoms is a substance aimed precisely to deprive our bodies of vital nutrition.

Lactulose is not a cure for anything. On a long term basis lactulose, far from making us better will prevent the liver from revitalizing, regenerating and recovering. Anything that takes away from our bodies the one thing that may save us is at worst killing us, at best ensuring any degree of recovery is made highly unlikely.

Equally unfortunately, lactulose is seen as the magic bullet by the medical profession. A magic bullet it is not. It may be the only bullet they have but magical? No.

So why use a laxative to treat a terrible and possibly fatal symptom of liver disease?

Because there is not much else.

Whereas big dollars are spent undertaking research into curing diseases like cancer or viruses like AIDS or Hepatitis C,  little if any money is directed at understanding the liver and exploring treatments which could neutralize or prevent the build up of the toxins that are trying to kill us.