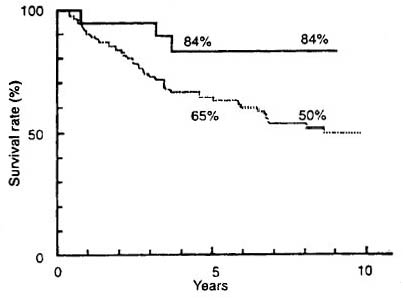 NOTE: This is hardly surprising. Once someone is admitted to hospital their diet consists of hospital food. Patients with cirrhosis are most often malnourished and putting them on a hospital diet is like a kiss of death. When are people going to learn that correct diet is fundamental to recovery from disease??!

Emergency hospitalization for cirrhosis signaled a substantial decline in patient life expectancy regardless of the patient’s disease stage, according to recent study results.

Researchers at Britain’s University of Nottingham examined Britain’s Clinical Practice Research Datalink and English Hospital Episode Statistics to identify 5,118 adult cases of cirrhosis from January 1998 to December 2009. Using a multivariate Cox-proportional hazards model adjusted for Baveno IV stage of cirrhosis, age, etiology and sex, researchers estimated 1- and 5-year survival rates for patients who were ambulatory (n=2,698) at diagnosis and for those diagnosed after an emergency hospital admission (n=2,420) for a liver-related cause.

Compared with the ambulatory cohort, hospitalized patients or those diagnosed with liver disease beforehand had an independently greater risk for death (HR=2.78; 95% CI, 2.53-3.06) when adjusting for sex, age, etiology and disease stage.

“We have shown that an emergency hospitalization predicts a poorer prognosis irrespective of disease stage, and conversely that patients have a relatively good outcome whilst ambulatory,” the investigators concluded. “This finding suggests that liver disease could be managed more intensively in an outpatient or day case setting, which might reduce emergency admission, with the hope of ultimately improving the survival experience of cirrhotic patients.”