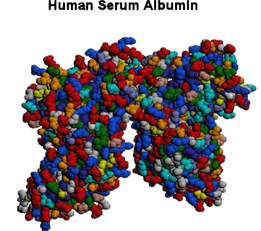 Albumin is pretty amazing stuff. Made up of hundreds of amino acids albumin undertakes a multitude of the livers functions while ‘patrolling’ the body. Little wonder that interference in albumin production is such an important factor in liver disease.

The second piece of this article – Albumin — What You Don’t Know Can Kill You is particularly interesting (to me anyway!!!).
The more we know about this awful disease the better chance we have of fighting it. IMHO.

Definition
Albumin is a protein manufactured by the liver.
The most abundant protein component of blood, produced primarily in the liver, albumin helps to keep the fluid portion of blood within the vessels, and helps transport drugs and other substances by way of the bloodstream. Low levels of albumin in the blood or its presence in urine may signal edema (the accumulation of fluid) as in pedal edema (in the ankles) or pulmonary edema (in the lungs), which may be symptoms of congestive heart failure, kidney or liver disease.

What does albumin do?

Albumin performs many functions including maintaining the “osmotic pressure” that causes fluid to remain within the blood stream instead of leaking out into the tissues.

What diseases cause albumin to be too low?

Liver disease, kidney disease, and malnutrition are the major causes of low albumin. A diseased liver produces insufficient albumin. Diseased kidneys sometimes lose large amounts of albumin into the urine faster than the liver can produce it (this is termednephrotic syndrome). In malnutrition there is not enough protein in the patient’s diet for the liver to make new albumin from.

What is a normal level of albumin?

The normal value depends on the laboratory running the test. Most labs consider roughly 3.5 to 5 grams per deciliter to be normal.

What happens if it gets too low?

In a healthy person with normal nutrition, the liver will simply manufacture more and the level will normalize. If albumin gets very low swelling can occur in the ankles (edema) and fluid can begin to accumulate in the abdomen (ascites) and in the lungs (pulmonary edema).

How can you make the albumin higher?

The person must return to health. Therefore the underlying disorder must be corrected. If the disorder is cirrhosis of the liver, the only way to correct low albumin is generally to have a liver transplant.

Why does albumin fluctuate so much?

Albumin — What You Don’t Know Can Kill You

In order to fight off invading bacteria, viruses, fungi and other invaders, your body sends the immune system into action engaging T-cells, B-cells, macrophages, eosinophils, and other immune system warriors in battle.

One of the proteins that decrease when the immune system is engaged in battle is a crucial protein called albumin, and that’s where the trouble lies. Albumin is an important protein that is found in most animal tissues. Albumin is assembled in the liver from more than 500 amino acids. The most abundant protein in the bloodstream, albumin’s many important duties include:

Protects easily damaged tissues from the free radicals that can destroy your cells and cause cancer by altering cellular DNA.

Guards against heart disease by transporting the antioxidant vitamins that help keep the coronary arteries clean, binding up fatty acids that tend to clog your arteries and stabilizing the ratio between HDL (“good” cholesterol) and LDL (“bad” cholesterol).

Binds up waste products, toxins, and dangerous drugs that would otherwise damage the body and encourage disease. It also detoxifies the fluids surrounding cells.

Ablumin Protects Your biological terrain by buffering your blood against pH changes.

Helps to keep your blood flowing smoothly by preventing red blood cells and other substances from clumping together.

Is essential for transporting vitamins, magnesium, copper, zinc, bilirubin, uric acid, sex hormones, thyroid hormone, other hormones, and fatty acids throughout the body. It regulates the movement of nutrients between your blood and your body’s cells.

Plays a major role in controlling the precise amount of water in various bodily tissues.

Plays an important role in transporting and circulating reservoirs of thyroid hormones.

Helps to ensure that there are adequate amounts of certain key minerals in your bones.

Binds and transports the “stress hormone” known as cortisol, reducing stress-induced damage to the thymus gland, brain, and connective tissue.

Albumin has been described as a “portable liver” because your liver is your body’s chief mechanism for disarming toxins and other dangerous substances, and because albumin, which is made in your liver, does the same throughout the body. It’s as if your liver has sent millions of tiny pieces of itself to every single little cell, to round up and destroy harmful substances and organisms.

Albumin plays an indispensable role in maintaining the delicate chemical balance of the nourishing fluids (interstitial fluids) that surround and support the trillions of cells in your body. If these fluids are healthy, your cells will flourish. But if the fluids become polluted, or depleted of certain substances, your cells cannot help but fall ill, and disease will sweep through the body.

Albumin is like a filter that removes toxins from water, like the net that scoops debris out of a swimming pool, like the dispenser that squirts extra vitamin D into milk albumin ensures that bodily fluids are clean, filled with nutrients, and properly balanced. And when you’re filled with health-giving fluid, you cannot help but be healthy.

Lowering Albumin: the “Hidden” Problem with Infection and Disease
Medical doctors know about albumin, and often measure the amounts found in the blood with a simple blood test. Standard blood work-ups include albumin, depicting anything between 3.0 and 5.2 as “normal.” Albumin has not been a focus of traditional medicine despite the fact that albumin levels are the single most important indicator of health status.

When the level of albumin in your blood drops, your risk of contracting a possibly deadly disease skyrockets. Statistical reports demonstrate that albumin levels correlate closely with age, but are not truly age-related. That is, albumin levels tend to drop as we grow older, but don’t necessarily have to.

Albumin levels drop when the immune system engages in a battle with invading:
Bacteria,
Viruses,
Fungi, and
Other germs.

It also falls when the body is forced to deal with an onslaught of toxins and other dangerous substances that we inhale, drink, or eat, or that get into the body through the skin, respiratory system, or other ports of entry.

Temporary drops in albumin levels are necessary, and not a problem. It’s as if we miss a credit card payment one month because of unexpected medical expenses, then make the missed payment, with interest, the next month. Our credit takes a small “hit,” then quickly recovers.

The problem comes when we’re continually battling infections and your albumin runs low for months on end — like a person who doesn’t make a credit card payment for several months, our “credit” is eventually ruined. Now we’re facing serious illness, and we never seem to have enough resources to beat the disease and “get ahead.”