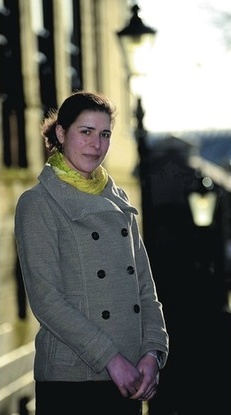 Out of the blue, Marina Barlow developed a yellow hue to her skin – jaundice – and found herself in the Bristol Royal Infirmary for a week where doctors diagnosed auto-immune hepatitis, for which there is no cure.

So Marina, who is 29 and lives in Filton, is stuck with the condition for life and, although she’s lucky that the disease is well-managed with medication, the worst-case scenario is that her liver deteriorates to the point where a transplant is the only way forward.

The sudden onset of such a potentially serious illness was a bit of a shock, but Marina has determined that negativity will not do. Indeed, although it’s been a life-changing experience, there are many positives to emerge and celebrate.

Two-and-a-half years on, she is feeling well and says: “My outlook on life has completely changed. You learn who your friends are and you learn to appreciate the people in your life; you look at what’s important and your priorities change. I have a great support network and life is good.”

In fact Marina, who works in procurement for the Environment Agency in Bristol, has been feeling so good that she has recently embarked on a charity trek.

Through Charity Challenges, she undertook a five-day, 45-mile hike through the mountains of Cuba, raising £3,000 in the process for the British Liver Trust. She has also taken up running and has completed a couple of 10km races.

“I wouldn’t have done Cuba or the 10ks if I hadn’t become ill. It’s been a real learning experience and a good one too.

“Whatever you have to face, you have to get something positive out of it – that’s really important.

“When it got to the first anniversary of being ill, which was July 2011, I thought I really wanted to mark it in some way. I didn’t know what to do, so I contacted the British Liver Trust because they have a page of events you can get involved in to raise money.

“I thought it would be good to do something out of my comfort zone and to raise money for the trust, so they can raise awareness of non-alcoholic liver disease as well as research into cures.

“It was one of the best things I have ever done and I would definitely do something like it again.“

Though the cause of her disease is largely unknown, specialists can keep a watchful eye on it with regular blood tests, scans and an occasional biopsy.

Until very recently, Marina’s been taking steroids – and enduring their unpleasant side-effects – but her liver has improved to the point where such drugs are no longer necessary, although she will take immune system suppressants for the rest of her life.

This means, of course, that Marina is particularly susceptible to infections, so even coughs and colds can be serious, but she maintains a healthy lifestyle to give herself the best chance of staying well.

Although auto-immune hepatitis is one of several liver diseases that cannot be attributed to excess boozing, cutting down the amount she drinks is key to continued good health.

Marina says: “My liver has steadily improved over time and I actually came off the steroids early in December.

“I’m generally quite healthy, but my alcohol intake is now next to nothing; I have the odd glass of wine here and there, but I can’t buy a bottle of wine for the weekend any more.

“But I’m in a better position than a lot of people with the same condition as me.

“One message I’d like to get out is that liver disease isn’t just associated with alcoholics.

“You only get one liver, it does so much and you have to look after it – and there is no guarantee of a liver transplant.

“I have no sympathy with alcoholics.“