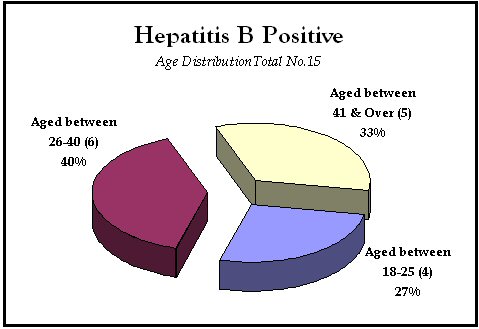 Hepatitis B is a viral infection that attacks the liver and can cause both acute and chronic disease.
The virus is transmitted through contact with the blood or other body fluids of an infected person.
Two billion people worldwide have been infected with the virus and about 600 000 people die every year due to the consequences of hepatitis B.
The hepatitis B virus is 50 to 100 times more infectious than HIV.
Hepatitis B is an important occupational hazard for health workers.
Hepatitis B is preventable with the currently available safe and effective vaccine.

Hepatitis B is a potentially life-threatening liver infection caused by the hepatitis B virus. It is a major global health problem and the most serious type of viral hepatitis. It can cause chronic liver disease and puts people at high risk of death from cirrhosis of the liver and liver cancer.

Worldwide, an estimated two billion people have been infected with the hepatitis B virus and more than 240 million have chronic (long-term) liver infections. About 600 000 people die every year due to the acute or chronic consequences of hepatitis B.

A vaccine against hepatitis B has been available since 1982. Hepatitis B vaccine is 95% effective in preventing infection and its chronic consequences, and is the first vaccine against a major human cancer.
Geographical distribution

Hepatitis B virus can cause an acute illness with symptoms that last several weeks, including yellowing of the skin and eyes (jaundice), dark urine, extreme fatigue, nausea, vomiting and abdominal pain. Hepatitis B is endemic in China and other parts of Asia. Most people in this region become infected with the hepatitis B virus during childhood and 8–10% of the adult population is chronically infected. Liver cancer caused by hepatitis B is among the first three causes of death from cancer in men, and a major cause of cancer in women in this region.

In developing countries, common modes of transmission are:

In many developed countries (e.g. those in western Europe and North America), patterns of transmission are different from those in developing countries. The majority of infections in developed countries are transmitted during young adulthood by sexual activity and injecting drug use. Hepatitis B is a major infectious occupational hazard of health workers.

The hepatitis B virus is not spread by contaminated food or water, and cannot be spread casually in the workplace.

The incubation period of the hepatitis B virus is 90 days on average, but can vary from 30 to 180 days. The virus may be detected 30 to 60 days after infection and persists for variable periods of time.

Most people do not experience any symptoms during the acute infection phase. However, some people have acute illness with symptoms that last several weeks, including yellowing of the skin and eyes (jaundice), dark urine, extreme fatigue, nausea, vomiting and abdominal pain.

In some people, the hepatitis B virus can also cause a chronic liver infection that can later develop into cirrhosis of the liver or liver cancer.

Who is at risk for chronic disease?

25% of adults who become chronically infected during childhood die from hepatitis B-related liver cancer or cirrhosis;
90% of healthy adults who are infected with the hepatitis B virus will recover and be completely rid of the virus within six months.

A number of blood tests are available to diagnose and monitor people with hepatitis B. They can be used to distinguish acute and chronic infections.

Other commonly used tests include the following:

There is no specific treatment for acute hepatitis B. Care is aimed at maintaining comfort and adequate nutritional balance, including replacement of fluids that are lost from vomiting and diarrhoea.

Some people with chronic hepatitis B can be treated with drugs, including interferon and antiviral agents. Treatment can cost thousands of dollars per year and is not available to most people in developing countries.

Liver cancer is almost always fatal and often develops in people at an age when they are most productive and have family responsibilities. In developing countries, most people with liver cancer die within months of diagnosis. In high-income countries, surgery and chemotherapy can prolong life for up to a few years.

People with cirrhosis are sometimes given liver transplants, with varying success.

The vaccine can be given as either three or four separate doses, as part of existing routine immunization schedules. In areas where mother-to-infant spread of the hepatitis B virus is common, the first dose of vaccine should be given as soon as possible after birth (i.e. within 24 hours).

The complete vaccine series induces protective antibody levels in more than 95% of infants, children and young adults. Protection lasts at least 20 years and is possibly lifelong.

All children and adolescents younger than 18 years old and not previously vaccinated should receive the vaccine. People in high risk groups should also be vaccinated, including:

The vaccine has an outstanding record of safety and effectiveness. Since 1982, over one billion doses of hepatitis B vaccine have been used worldwide. In many countries, where 8–15% of children used to become chronically infected with the hepatitis B virus, vaccination has reduced the rate of chronic infection to less than 1% among immunized children.

WHO is working in the following areas to prevent and control viral hepatitis:

WHO also organizes World Hepatitis Day on July 28 every year to increase awareness and understanding of viral hepatitis.

Posted in What Is? and tagged hep b, hepatitis b, virus
← Experts warn of a liver cancer time bombWhat I need to know about Hepatitis B →