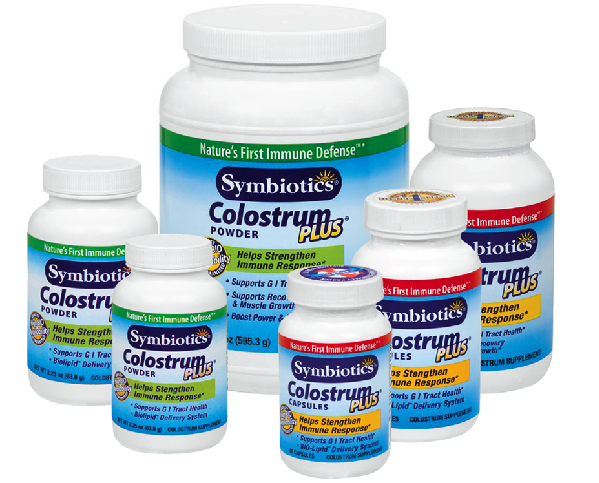 Center for Nutritional Research – All about Colostrum

WHAT DOCTORS HAVE TO SAY ABOUT COLOSTRUM

When a (mammal) … gives birth to its offspring, its mammary glands filter out of the blood the immune factors it has acquired through a lifetime of fighting disease-causing organisms. It then concentrates these factors into special non-milk immune supporting fluid called colostrum. A mother animal produces true colostrum for only the first twenty-four hours after giving birth.
Robert Preston, MD
President, International Institute of Nutritional Research

M.T., a 70 year old female, complained of ‘bowel trouble all my life.’  Constipation requiring continuous use of laxatives, stool softeners and enemas might last several weeks, followed by diarrhea for a few weeks.  Then the cycle would repeat.

She had seen many doctors, had many tests, including barium enema X-rays, colonoscopy, etc.  Her most frequent diagnosis was irritable bowel syndrome and slight iron deficiency.  No treatment, diet or drug therapy was effective.

M.T. is an active person of normal weight and is a competitive barrel racer on the rodeo circuit.  There were times when she had to drop out of competition due to explosive bouts of diarrhea.  She complained of ongoing pain in her abdomen and chronic fatigue.

I started her on broad spectrum colostrum, and within two weeks she noted a good improvement.  By the end of the third week she had completely normal gastrointestinal function.  No more diarrhea.  No more fatigue.  No more constipation.  The slight iron deficiency has normalized, and she has, in her own words, ‘energy to burn.’

I feel your colostrum is the only truly effective product on the market today.  We have in past years used several other brands of colostrum with little or poor results.
E.W. McDonagh, DO
McDonagh Medical Center,
Kansas City, Missouri

We are so excited about the results we are having from the colostrum.  Here are four wonderful healing results we have to share with you.  There are a lot more that will be using this colostrum.  This truly is a wonderful product for those who are fighting to regain health and wholeness.  Please share these healing testimonies with others who need healing.

One young 12 year old boy in California was suffering from a severe case of mucosa colitis and losing weight.  He was literally dying.  His doctor was planning surgery to remove his colon.  His father called me and asked what could be done naturally.  I recommended that he start taking double doses of colostrum.  After 5 days, the bleeding from the rectum ceased, and within 7 days he began to have normal bowel movements.  From that point on he has gained 32 pounds of weight.  His parents were most delighted to see the change.

Here in our town of Cottage Grove, Minnesota, a local minister had uncontrollable diabetes and was taking three insulin injections daily.  I shared with him the benefits of colostrum, and several months later he came back to me and was convinced that something besides injections had to be done.  He purchased the colostrum, and within one week the miracle of healing kicked in and he was no longer giving himself insulin injections.  Now he will not go without colostrum to regulate his insulin secretion.  He is totally convinced of the benefits of taking colostrum.

Then his wife came to see me.  She had a staphylococcal infection and numerous ulcer-type sores on her body.  We placed her on double doses of colostrum and natural zinc ointment.  Within two days the sores began to heal, and in one week they were gone.  She had visited no less than two medical doctors who could not help her.  Now her countenance has changed with joy and health restored.

A lady in our church had bouts of heavy asthma-like breathing.  We put her on colostrum, and she noticed how easy her breathing became.  She found that she has more energy and continues her daily schedule with ease and comfort.
Michael McCann, ND
McCann Wellness Center
Cottage Grove, Minnesota

My use of bovine colostrum is based on good science, experience and common sense as I was introduced to veterinary medicine while working on a dairy farm during high school and later as a milk test supervisor for the University of Georgia Dairy Department.  I have been a veterinarian for 52 years – the last 44 years in small animal practice – and have been involved in numerous clinical trials.  I have seen old, favorite treatment modalities replaced with new and better protocols.  The use of bovine Colostrum in my practice has favorably impacted a greater diversity of diseases than any other product except the ‘silver bullet’, cortisone.

Jake, a 125 pound Rottweiler, was presented with a sarcoma half the size of a tennis ball just lateral to the fetlock.  Excision necessitated transpositioning the skin to cover the defect.  Ten days post surgery the graft had failed, and the exposed tissue appeared to be recurring tumor.  Treatment consisted of debriding dead tissue, two capsules of colostrum twice a day, and powdered colostrum liberally applied under bandage to the wound every other day.  Healing was complete after six weeks.  Six months later there has been no evidence of recurrence of tumor, and no further surgery was needed.

Nancy is one of those unfortunate women who are addicted to picking up strays.  In spite of reasonably good care antibiotics and appropriate vaccines, she was continually plagued with upper respiratory infections in both kittens and puppies, non-responsive to anything except tincture of time.  Addition of colostrum to her regimen had kept Nancy happy for the last ten months.

For about six months now, we have been seeing an unusual number of cats with recurring cystitis in spite of various antibiotics or diets.  Approximately two months ago, we started giving these cats one capsule of colostrum twice a day, maintaining them on the cystitis diet and discontinuing antibiotics.  To date all have responded (at least 2-3 per week).

The most gratifying results have been in ‘curing’ inflammatory bowel disease and controlling the many forms of allergic dermatitis/otitis/pododermatitis and the accompanying yeast and/or bacterial infections.  Clients continue to amaze me with their reports of the improved quality of life in their senior citizen arthritic dogs and cats.
B.S. Austin, DVM
Longwood, Florida

I have a number of patients who are arthritic, and bovine colostrum dispensed for the treatment of rheumatoid and osteoarthritis has provided them with amazingly good results.  One small-boned elderly gentleman who was terribly overweight did suffer in total agony from rheumatoid arthritis.  He could hardly walk.  I put him on colostrum, about a bottle of 120 capsules per week, and he soon reached the point where he could walk without pain even though he did not lose the weight.

I used bovine colostrum for the arthritic treatment of my 56 year-old mother.  Her left knee exhibited a lot of inflammation as the result of having been damaged in a prior automobile accident.  I had tried a number of different therapies such as shark cartilage and MSM without success, but when I added the bovine colostrum she was pain free in three days.  She now takes it religiously.

In Mexico, my staff and I do a lot of work with cancer, and two-thirds of my cancer patients are taking colostrum.  About half of my patients are poverty-stricken, and I stretch my resources to help them by dispensing colostrum to them at little or no cost.  For those who can afford it, I typically have them take five or more 480 milligram capsules a day – that’s over 2000 mg.  Colostrum really does seem to make a beneficial difference for my cancer patients.  They have more energy, and it keeps down some of their infections as a complication of the illness.

I am giving colostrum to hepatitis C patients.  One of these people living in Northern California who found it impossible to come to Mexico consulted me by telephone.  His situation was really serious because he had a hepatitis C viral load of 8 million.  I put together a protocol for him of bovine colostrum, calcium orotate, reduced glutathione and protease enzymes.  Within two months, this patient returned for laboratory testing and discovered that his hepatitis viral load had plummeted to 100.  Since the patient did not take treatment with anything else, this is convincing proof to me that bovine colostrum works synergistically in a combined nutritional protocol.  I’ve gone on to successfully treat many more cases of hepatitis C.
Stephen Hynes, ND
Dr. Hynes runs a clinic in Ciudad Acuna, Mexico,
just across the border from Del Rio, Texas

Miss C.B., age 11, has suffered from severe juvenile rheumatoid arthritis since age one.  She has also been under the care of a Pediatric Rheumatologist since age one.  This Rheumatologist has tried every nonsteroidal anti-inflammatory agent available with no great improvement.  When she presented to my office three weeks ago, she was taking Celebrex 200 mg daily, which is widely known to be the best treatment available.  The Rheumatologist was planning to place C.B. on methotrexate and steroids if no improvement was seen.

When I saw C.B., she was wearing braces on her lower legs, had swollen joints, to include her knees, elbows, neck and back.  I placed her on colostrum 4000 mg daily (4 capsules every 12 hours), and three weeks later she no longer needed her braces.  She had no more pain or swelling in her joints.  Her recovery was nothing short of miraculous.  She is continuing to take her colostrum as directed, and she has had no relapse of symptoms.  Her Rheumatologist is shocked and amazed.  I continue to see wonderful results in my patients.  Keep up the good work.  If every person were taking (colostrum), most of the medical community as we currently know it would dry up and blow away.  Very few people would get sick.
Gary Mezo, ND, PhD
Westchase Alternative Medicine, Inc.
Tampa, Florida

Scientists have long known about the increased resistance of breast-fed babies to certain infections, particularly to intestinal disorders.  However, because of changing cultural values, many post-war mothers didn’t breast-feed their babies, and now many of these grown-up babies are dealing with prevalent and difficult-to-treat immune-compromised conditions.  Part of this problem is due to the breakdown of the environment and the nutrient-deficient food we eat.  Furthermore, many older people have fragile immune systems due to a multiplicity of factors, including stress, illness, viruses, diseases, toxin-laden food and polluted air.  Colostrum may well be one of the most important immune system nutrients to come along in the last 50 years, since more and more illnesses and disease conditions are linked to a suppressed or compromised immune system.
James Wilson, DC, ND, PhD

[Colostrum’s] oral administration, low cost when compared to other current experimental biologic response modulators, and the absence of side effects are remarkable… To us, as clinicians, the most valuable aspect of this new therapeutic alternative is its almost miraculous effect on pain relief…something humanity has always longed for.
Alejandro Nitsch, MD
Guatemala

Posted in Vits, Mins and Supps and tagged supplements
← Use of Protein to Cure AscitesMy alkaline diet really did help me survive breast cancer →