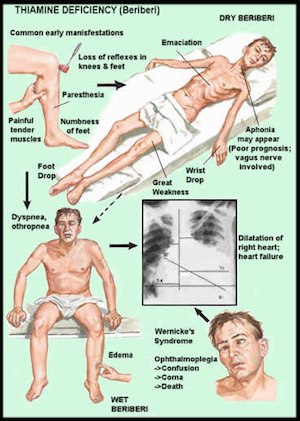 What is Vitamin B1 Deficiency?

In my quest to find a solution to the problems I and many others face with Cirrhosis, I posted an article at the weekend about Cirrhosis being a syndrome, not a disease.

In continuing to look into this and in particular vitamin deficiency a number of interesting facts emerge which may or may not have relevance.

Instead of doing the usual searches for cirrhotic terms, being awkward, I turned the logic around a bit and started looking at terms not normally ascribed to Cirrhosis.

Beri Beri sprung out at me. Beri Beri has been known about since 2600BC. The causes and symptoms of Beri Beri are well known and documented. Beri Beri is caused by a vitamin deficiency, namely B1.

The B1 vitamin was the first vitamin to be discovered and is a water soluble vitamin. Deficiency of this highly important vitamin can affect all major organs of the body obviously including heart, lungs, liver and kidneys.

Wet beri beri is associated with mental confusion, muscular wasting and edema amongst other things.

As those of us that suffer from edema, ascites is just another form of this and both are caused by the accumulation of fluid, edema in the legs and feet, ascites in the abdomen, lungs and possibly heart.

The ‘normal’ cure for this is to take diuretics. What do diuretics do? They flush excess liquid from the body and along with the liquid disappears essential vitamins such as B1.

From my reading and now my own experience, my ascites has cleared up through dietary changes, vitamins and protein, and not through diuretics.

Dry beri beri is associated with mental confusion, muscle wasting and edema along with several other things.

A main cause of encepalopathy seems to be a lack of vitamin B1 which leads to a variety of types of enthelopathy including Wernicke-Korsakoff syndrome and Korsokoff’s psychosis. Both of these are linked to alcohol abuse and alcoholic brain disease.

Thiamine also binds itself to protein and albumin in order to transport itself throughout the gastrointestinal system. A ‘cure’ for encepalopathy is to take Lactulose, which flushes out the upper and lower intestines and thus the thiamine, which after eating does not get time to disperse through out the body.

Posted in What Is? and tagged deficiency, vitamin, vitamin b1
← What is Sustained Response?Update – Non-alcoholic fatty liver disease →